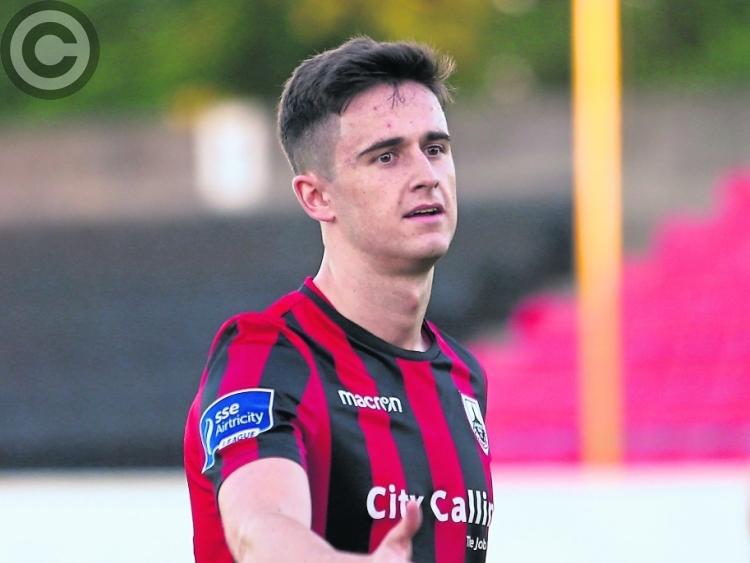 Sam Verdon will be in action for Longford Town against Cabinteely in the first leg of the promotion play-offs. Photo: Syl Healy

Longford Town face a very tough task this Friday night (kick-off 7.45pm) when they head to Stradbrook to take on Cabinteely in the first of two games to see who qualifies for the next round of the play-offs against Drogheda United.

After the final games in the First Division two weeks ago Drogheda were runners-up to champions Shelbourne and finished in second position by virtue of a better goal difference than the Town.

A few recent bad results meant that Longford Town missed out on the automatic promotion spot and then the runners up spot, so its promotion the hard way if we are to get back into the Premier Division.

It's a well known fact that Cabinteely are the Town's bogey team this season having taken seven points by virtue of a draw and two victories over Longford.

A lot has changed in the club since Cabinteely's two nil victory over the Town at Stradbrook back in July.

This season there has been a big change in fortunes with Cabinteely really holding the aces. Pat Devlin's team have held the upper hand this season with two victories and a draw to date and no doubt Daire Doyle will be trying to break that sequence in the forthcoming games. The first meeting between the clubs this season was at Stradbrook and the game ended one all.

Sam Verdon gave the Town the lead after 13 minutes and the home side equalised through Rob Manley in the 56th minute. Manley has been the scourge of most defences this season and he isn't the League's leading scorer for nothing.

Cabinteely came to City Calling Stadium in early May and went away with 3 points after a slender one nil victory.

This game had a goalless draw written all over it until the 85th minute when the very experienced Kieran Marty Waters scored a very good goal after being put through by the very impressive Rob Manley.

The Town should have at least got a share of the points as some of our players missed some very good scoring opportunities during the game.

The Town slumped to a surprise defeat in that game and also lost their unbeaten run which had extended to ten games.

That victory for Cabinteely put them on top of the table and moved the Town out of their leading position.

The next meeting between the clubs took place at Stradbrook at the end of July and the Town travelled to Dublin in a confident mood after beating Drogheda United 2-1 the previous weekend at City Calling Stadium.

But after a  frustrating game Longford left with no points after a 2-0 defeat. Rob Manley was the tormentor in chief as he scored twice but the result would be much different if the Town hadn't squandered many scorable chances during the game.

Sean Boyd made his debut for the Town when he came on before the hour mark having joined the club on loan from Shamrock Rovers.

Another recent signing Jack Doherty missed the game through injury so Dylan Grimes started he  was replaced by Peter Hopkins in the 78th minute.

The Town had quite a few chances in the first half and then paid the price when Rob Manley beat Lee Stacey in his second attempt.

This was a big blow for the Town who were doing reasonably well against Pat Devlin's side in the first half.

The Town hit the post just past the hour mark when new signing Boyd was so unlucky when a great move started by Aodh Dervin who played the ball to Sam Verdon who in turn passed to Boyd.

Sam Verdon, who had a fine game, could have equalised in the 82nd minute but he headed too close to keeper McGuinness who saved the home side.

The home side made sure of all three points in stoppage time when that man Rob Manley scored his and the home side's second goal.

Cabinteely won this game without the services of Kieran Marty Waters and it has basically given them the indian sign over the Town this season.

Cabinteely will be in a very confident mood going into Friday's game after dominating the games against us this season but one would expect the Town's new management team to have a few surprises lined up for Pat Devlin's side.

There is no doubt that Cabinteely are a fairly useful outfit and they will be no pushover but it's like having two Cup matches coming up over the next two weeks and we know what we have to do and I suppose it's the same for them.

Stephen McGuinness is a very good keeper who has lots of Premier Division experience and he will be hard to beat while the defence are a no nonsense outfit who will be tough nuts to crack. Jack Tuite, Conor Keeley, Eoin Massey are all top defenders and Kevin Knight, who played for us this season, will be hoping to keep a clean sheet for his new team and  thwart the Town strikers.

Keith Dalton is playing some very good football while Shane Barnes and Kieran Marty Waters are good enough to be still in the Premier Division.

Everyone knows that Rob Manley is a major threat to every defence in the Division and there is no doubt that the vultures from the Premier Division will be chasing him in the coming weeks.

Cabinteely also have Yuta Sasaki in their squad and the young Japanese player could be a danger if he was introduced against us but at this stage every Cabinteely player will pose a threat.

With the week break Daire Doyle will be hoping that any niggling injury problems will have cleared up but Daire will have to plan without the services of a few players.

Anto Breslin, who was red carded in the Bray game,  received a three match ban and will miss both games against Cabinteely and that comes from a very very poor referee.

Shane Elworthy also misses out because of an accumulation of yellow cards and the in form defender will be sorely missed as he is one of the top defenders in the league.

Aodh Dervin, who missed the Bray defeat, also missed the Cobh game and he will be looking forward to this big one against Cabinteely.

If Daire Doyle has a full squad to pick from with the exception of the suspended Elworthy and Breslin I expect the Town to cause a few problems for Cabinteely.

The wily Devlin who has done very well over the years in promotion battle and will really be up for this game as I really think that he has the midas touch when it come to these pressure games.

Devlin may be the experienced man in the dugout but he has a strong bench with Eddie Gormley as his right hand man and coach and also has Graham O'Hanlon in the dugout which is a very strong staff especially for a First Division club.

Cabinteely may have strength in depth in the staff but our new look management have a good look about it and I expect Daire Doyle to put his mark on these two upcoming games.

Daire is now being assisted by John Martin who has played for the club and also has lots of experience in senior football management.

Next Friday's game is only the first half of two very important play-off games and let's hope that we bring back a positive result to City Calling Stadium for the home game on Friday  October 11.

The full Promotion/Relegation Play-off series schedule is as follows: