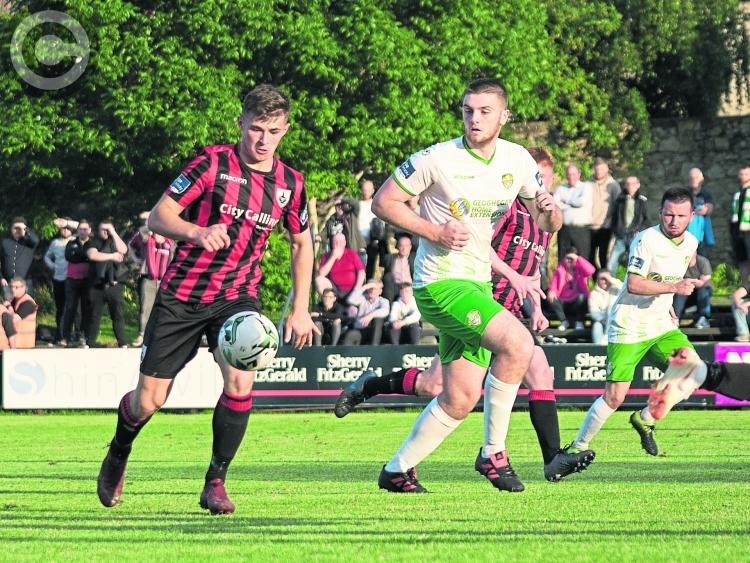 Longford Town manager Neale Fenn will be hoping that his team, who are struggling for form, will bounce back after their surprise 2-0 defeat away to Cabinteely on Friday night last.

Galway United come to City Calling Stadium on Saturday evening (kick-off 7.30pm) and Longford need a win to consolidate their position in the top four and a place in the promotion play-offs.

At this stage of the season we are now in a situation that we will be hoping to get the runners-up spot in the First Division with six games remaining.

Only some weeks ago Longford Town were sitting on top of the table but then the run of bad results started which allowed Shelbourne establish a commanding lead in the battle for the title.

Early in the season we had the best defensive record in the league and were grinding out results but that has all changed now and we are missing glorious scoring chances.

Neale Fenn said after last weekend's defeat that the best team won but what about all the missed chances during the game when we could have and should have scored.

Last week before the game against Cabinteely Neale Fenn announced the signing on loan of Sean Boyd from Shamrock Rovers. He had been on loan with Finn Harps and he is very highly rated player.

The on loan striker came on as a second half sub and was so unlucky not to open his Town goal account after being set up by Sam Verdon but his shot struck the post and came back to home keeper McGuinness.

Boyd may be the answer to Neale Fenn's problems in front of goal as the Town once again squandered many chances in the game last weekend and this has been a problem for most of this season.

One staunch Town supporter said recently if we had Davy O'Sullivan this season we would be practically promoted by now as we are creating the chances but unfortunately we aren't putting them away.

As it stands at the moment the Town have six games left, three home and three away. Galway are the visitors on Saturday and we have Shels here on August 17 and the final home game is against another team chasing a promotion play-off spot Bray Wanderers and that is on September 14.

Next weekend the Town are away to near neighbours Athlone and then play them in the Cup the following Saturday at City Calling Stadium.

The final two away games are against Wexford on August 30 and Cobh  on the final day of the season on September 21.

Looking at the run in of games the Town would at least want three or four wins to keep their place in the play- off spots as Shels look past the post in the chase for automatic promotion.

Neale Fenn has brought in new faces and one wonders will he have enough strength in depth to clinch either of the three promotion play-off spots.

Jack Doherty, who started the Drogheda game but had to retire due to injury, missed the trip to Cabinteely and hopefully he will be back in contention for the Galway match.

Jack played for Wexford earlier in the season in Longford and he was the outstanding player on the pitch. The Town fans will be hoping for him to produce similar performances in the coming weeks.

Another recent signing, former Shelbourne player Dylan Grimes, has endeared himself to the Town fans with his cheeky back heeled goal against Drogheda two weeks ago and we can expect more goals from this talented player.

One player who has been outstanding all season is local player Aodh Dervin who gives 100% every weekend and we are so lucky to have such talent coming through from our underage teams.

No matter what the opposition or if it's a league game or a friendly Aodh always gives total commitment and we hope that all his team mates will have the same attitude for the rest of the season.

Galway got a good result at home on Friday night last against promotion chasing Bray Wanderers.

The game ended 2-2 with striker Vinny Faherty scoring the equaliser late on after former Town player Dylan McGlade made the scoreline 2-1 in favour of Bray.

Galway may be at the wrong end of the table but Alan Murphy is building for next season with many very good young players coming through from the under 17s and under 19s.

In the previous two meetings between the clubs this season it's honours even with both clubs winning at home with similar scorelines.

The first home game against Galway fixed for mid March was postponed due to inclement weather conditions and was refixed for Monday June 3.

On that occasion the Town won 2-1 with early goals from Dean Byrne (12 mins) and Sam Verdon (19 minutes) while sub Shane Doherty was only on the pitch for a  minute when he scored for Galway in the 55th minute.

A few weeks earlier the Town travelled to Eamonn Deacy Park and they ended up pointless on another 2-1 scoreline.

Dean Byrne opened the scoring for the Town in the 11th minute when he capitalised on a bad back pass from Maurice Nugent and the Town striker pounced to put the ball into the back of the net.

After taking the lead the Town had numerous chances to extend the advantage but like in most games this season we couldn't capitalise on our dominance and were made to pay in the end.

Early in the second half Vinny Faherty headed a Mark Ludden cross past Steacy in the Town goal. Longford had numerous chances to regain the lead but they were all missed as they crashed to a disappointing defeat. Striker Faherty got his and Galway's second goal in the 83rd minute when he headed Conor Melody's cross into the net.

The Town have to win the game against Galway on Saturday as they face a tricky trip to Athlone on the following Friday.