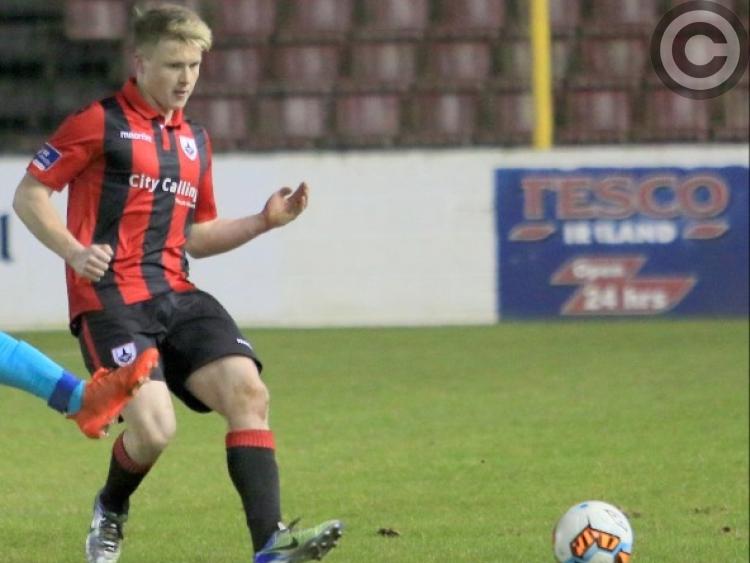 Daniel O'Reilly, who scored the winning goal for Longford Town in the 89th minute of the EA Sports Cup second round clash against Shamrock Rovers at Tallaght Stadium.

A late goal from defender Daniel O’Reilly saw Longford Town advance to the quarter-finals of the EA Sports Cup with a deserved win over Shamrock Rovers at Tallaght Stadium on Tuesday night, watched by the very small official attendance of just 304.

O’Reilly got to the end of substitute Evan Galvin’s ball into the area in the 89th minute to finish to the net from close range. Rovers had a chance to grab a dramatic last gasp equaliser but Brandon Kavanagh’s effort just went over the bar.

It was a much improved display from the Town who made a few changes from the team that lost to UCD in the league clash at City Calling Stadium on Saturday night last.

Shamrock Rovers, on the other hand, made nine changes from the team that started in the 1-1 draw against Limerick in the Premier Division clash the previous Friday night.

The best chance for Longford in the first half of this second round EA Sports Cup fixture fell to Sam Verdon but his shot went wide after getting on the end of a Karl Chambers cross and Dean Byrne then followed up with another opportunity to break the deadlock.

In the 43rd minute Shamrock Rovers had a great opportunity to open the scoring when David McAllister’s cross found Kavanagh at the far post but his shot just went inches wide.

Rovers had the first chance on goal in the second half when in the 58th minute McAllister saw an opportunity to lob Jack Brady but his effort went over the bar. The Town began to see more of the ball with Dylan McGlade causing problems on the wing.

In the 76th minute a free-kick from Kavanagh fell to Brandan Miele but his shot flew across the box with former Town striker Gary Shaw failing to get on the end of it. Despite the home side creating more chances on the changeover, the Town were able to soak up the pressure.

Longford keeper Jack Brady pulled off an excellent save in the 83rd minute to deny McAllister. Minutes later Kavanagh brought another fine save out of Brady as he kept his net intact.

Dylan McGlade had his effort saved by Rovers keeper Tomer Chencinski in the 88th minute and moments later the winner materialised when a corner was not cleared and Daniel O’Reilly pounced to drill a low shot into the net.

One minute into stoppage time Brandon Kavanagh had a chance to level for Rovers and send the game to extra-time but he shot over the bar as Longford Town held out to earn a quarter-final clash away against Cobh Ramblers on Tuesday May 8.