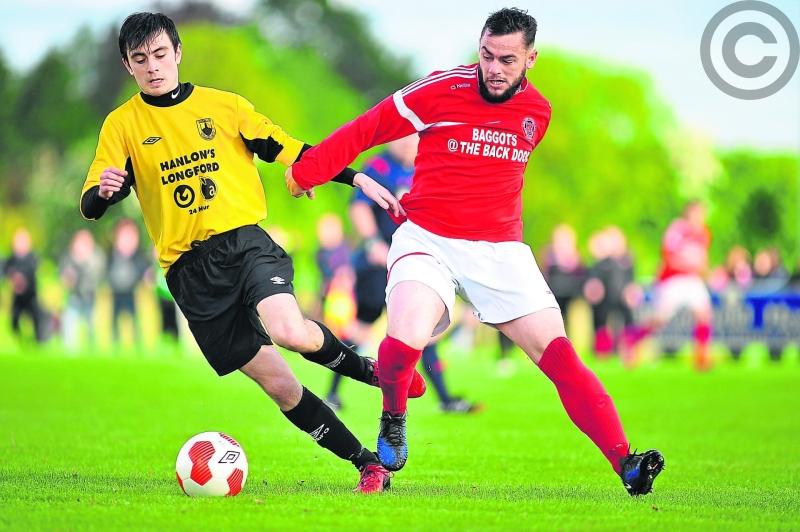 Andrew Kelly on the ball for Longford side Camlin United in this tussle with a Clara Town opponent. Action from the CCFL Counties Cup Final. Photo: Frank McGrath

Despite playing the majority of the match with ten men, Clara Town (Offaly) still succeeded in winning the Counties Cup as they got the better of Longford side Camlin United in what can only be described as a fantastic game of football at the Mullingar Athletic grounds on Saturday evening last.

The first real moment of note came after 16 minutes when a delightful ball by Eddie Nevin played in Ruairi  Clarke who was taken down by Clara goalkeeper JP Slammon outside the box. The referee Paul Tone, who was replaced by Declan Foran early on through injury, decided the foul to be worthy of a straight red card much to the anger of the vocal Clara support.

While one could not debate the foul by any means, the red card did seemed harsh as you could argue there wasn’t a clear goalscoring opportunity in place.

Clara came close to breaking the deadlock in the 33rd minute when a Thomas Deehan header from Luke Dignam’s free-kick was saved by the Camlin keeper Colm Farrell but they finally broke the deadlock five minutes later from a screamer of a free-kick by Dignam as the ball ended up in the top corner of the net to give the Offaly side a 1-0 lead at the break.

The second half was brilliant from a neutral perspective, starting in the 50th minute when Clara defender Pa Smith tripped up Frankie McMahon to give Camlin United a penalty. Substitute keeper Robert Moran came to the rescue for his side as he denied Eddie Nevin from the spot but Camlin equalised moments later with a brilliant finish from midfielder Andrew Kelly.

Their joy was short-lived though as a mistake from Camlin goalkeeper Colm Farrell allowed Josh Fleming in for a gift goal to restore the lead for Clara Town.

Camlin were level again though three minutes later and when Ruairi Clarke tapped into an empty net there was a real feeling among the crowd that Camlin would push on and lift the cup.

Clara rallied very well though and influential midfielder Stephen Deehan tried an audacious chip with 70 minutes gone on the clock which ended up narrowly going wide at the near post.

The Offaly outfit turned to super sub JJ Colsh for inspiration and he duly delivered scoring two goals to win the Counties Cup for Clara.  Colsh balanced the ball on his chest, turned and shot for what was a marvellous finish which gave Clara the lead again with 19 minutes to play.

With 79 minutes gone on the clock, Colsh again found the net with the insurance goal for his side to win this prestigious title. In what was a brilliant break from the back, Stephen Deehan hit a pinpoint cross and the substitute buried the ball to the net with a volley to break Camlin United hearts.

To their credit though, Camlin refused to give up and they had three opportunities to score late on, one of which was cleared off the line and two that were expertly saved by sub goalkeeper Robert Moran as a delighted Clara Town lifted the Counties Cup.