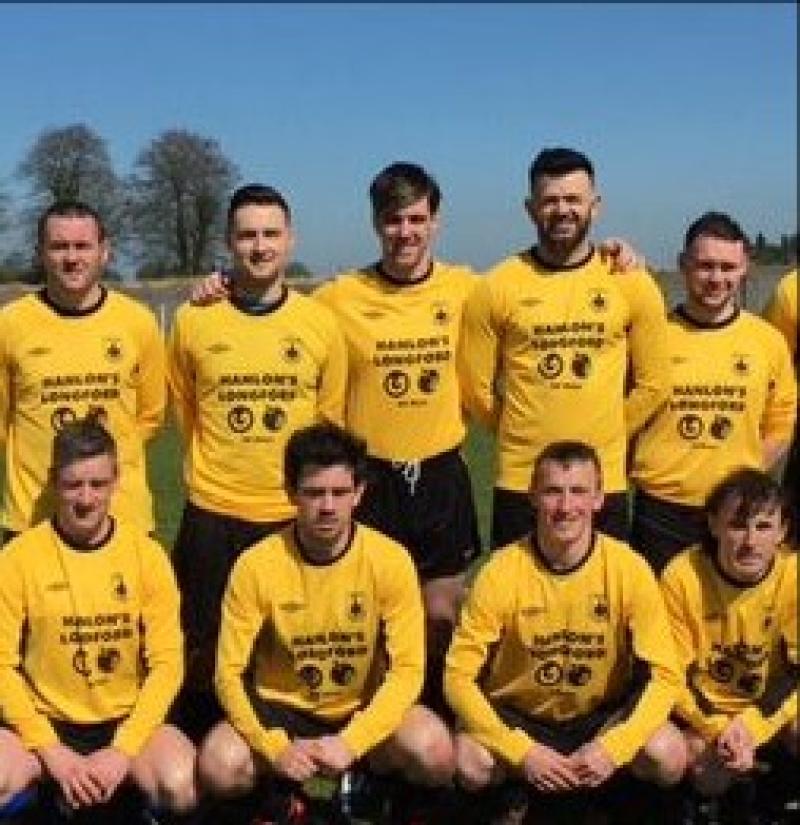 Some members of the Camlin United soccer side who play Clara Town FC in the Counties Cup Final in Mullingar on Saturday evening next.

Since the competition was first formed in 1972, never has a team from Longford been victorious in the most prestigious trophy in CCFL history, the John Farrell Counties Cup.

In those  45 years, great local teams like the ‘C’ team & FCFC  have knocked on the door but it seems like Westmeath and Offaly sides have dominated in recent years. Now Camlin United manager Denny Kane has a chance to lead his side to victory in the Counties Cup final against Offaly opponents Clara Town FC in Gainstown, Mullingar this Saturday evening, kick-off 6pm.

Only once this season in nearly 30 games have Camlin lost in normal time, losing out at retaining the league by 3 points, and then beaten on penalties in the Area Cup Final and again on penalties in the Michael Dolan Cup semi-final. It  is a hard pill to swallow but all that will be forgotten about if they can make history by being the first team ever from Longford to lift the prestigious Counties Cup trophy.

Experienced players like Eddie Nevin, Paul Doherty, Martin Tarmey and Kevin Jones have numerous league and cup trophies and success in the Counties Cup would complete it all. Younger dynamic players like the three Clarke brothers Ruairi, Robbie and Sean along with Niall Kelly and Andy Kelly are now getting a sense of how massive this trophy is and what it means to all involved now and before to finally bring it back to Longford.

However it will be no easy task for the Saturday league team as they go up against Clara Town FC who have already took out Sunday senior division teams St Peter’s & Willow Park along the road and they like Camlin also boast experience and youth.

Camlin were handed tough away draws all along the way but have stood up to the task by beating favourites Monksland United and then overcoming another senior division team in Tullamore Town.

So what started in a competition that had over 120 teams from midland counties has now narrowed down to just 2 teams, but unfortunately there can only be one winner.

We hope it is our own who will be representing Longford in Mullingar this Saturday evening so come show your support for what could be a major sporting event win for Longford in recent years.