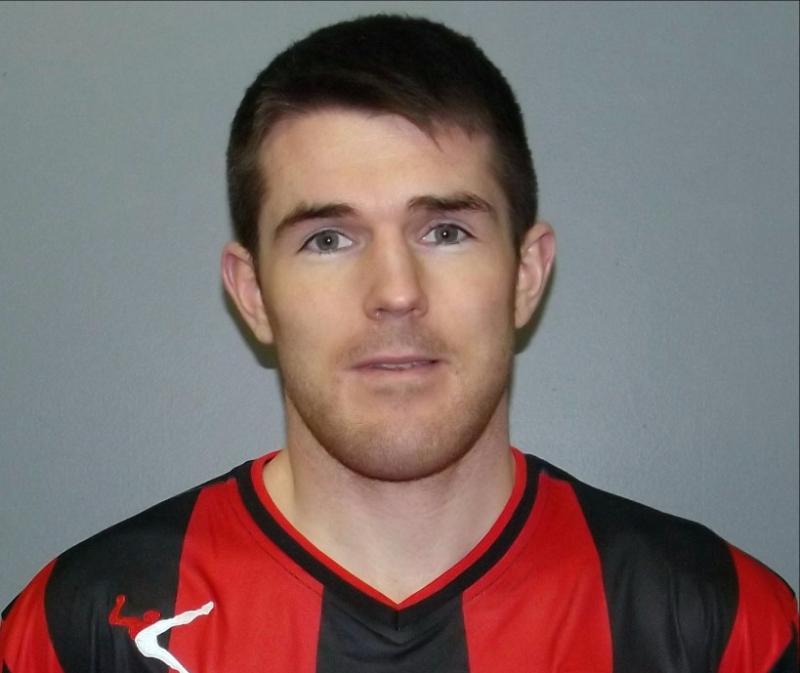 David O'Sullivan, who is out injured for the league clash against Shelbourne at City Calling Stadium. Photo: James Donnelly

Longford Town play their first game in the second phase of league fixtures when they entertain third in the table Shelbourne at City Calling Stadium this Saturday evening, kick-off 7.30pm.

Ahead of the crucial clash against Shels in the First Division this weekend, manager Alan Mathews has announced four absentees through injury.

Long-term casualty Noel Haverty is still out with an ankle injury, while David O'Sullivan is suffering from a groin injury and Don Cowan has a hamstring problem. In further bad news, Jake Kelly broke his nose in training and will miss the game as well.

Shelbourne are currently third on 12 points, just 2 behind leaders Waterford and one behind second in the table UCD. Their form to date  under manager Owen Heary has been steady with a record of three wins three draws and one defeat in their opening seven games.

Their draws were 0-0 against the Town on the opening day of the season at Tolka Park. They drew 2-2 against current leaders Waterford also at Tolka Park while the other draw was a 1-1 result against Cobh  at St Colman's Park. They beat Cabinteely 1-0 and Athlone Town 4-1, both away, while the other win was at home in Tolka Park against Wexford FC – a 2-0 win. Their only defeat to date was at Belfield when they lost 4-0 against UCD.

The current Shelbourne squad have a mixture of youth and experience and there is no doubt that the experience of manager Owen Heary has made a lot of the younger lads much better players since he took over at the club. Heary has lots of experience in the league here and of course in Europe with the famous Shels team that were the country's standard bearers just like Dundalk in recent times. Heary has won everything as a player but hasn't had the same success as a manager yet.

Shelbourne have a former player as manager but so have the Town as Alan Mathews and his assistants Kevin Doherty and Gary Cronin have all worn the famous red and black. There are also quite a few players in the squad for Saturday night’s game who have played for both clubs.

Paul Skinner, Dylan McGlade, Jack Brady and Gavin Boyne all played with Shelbourne and it's very interesting to note that both the Town's keepers have played with the Tolka Park club. Alan Mathews and Kevin Doherty both managed the famous Dublin club and the Shelbourne  squad at the moment includes Lorcan Shannon, James O'Brien, Mark Hughes and Robert Bayly all of whom have played with Longford Town.

Heary has assembled a very experienced squad with little known about them and they are sitting very comfortably in third place and could be one of the dark horses in the race for the one promotion spot. The experience of Dean Delany in goal is a vital factor as he is one of the famous team which did so well for Shelbourne in Europe some years ago.

Shels also have former Bohemians player Derek Prendergast in defence and the big centre half is proving to be one of their successes, both in defence and up front from set pieces. They have the experienced duo of Alan Byrne and Robert Bayly in their squad and they are real match winners but equally they can get themselves in trouble with referees.

When the teams met on the opening day of the season at Tolka Park there is no doubt that the Town should have won the game with the Town missing many chances, particularly Davy O'Sullivan who failed to convert a penalty.

Since that opening day game Shelbourne have been getting stronger as the season got to the end of the first phase of games and they will no doubt come to Longford in a confident mood. They have scored ten goals to date when the Town have only scored four and three of them came against Athlone Town in Lissywollen. The Town have conceded seven goals to date and Shelbourne have conceded eight which is hard to believe as they are also six points ahead of us at the moment.

The Town fielded possibly their strongest squad on Friday last against Wexford and once again our problem was in front of goal as many scoring chances were squandered. We  lack penetration in front of goal and there seems to be a lack of confidence from some players.

During the game in Wexford the Town lost Davy O'Sullivan and Don Cowan both through injury and they were replaced by Dylan McGlade and Jake Kelly but the team still dominated the exchanges but couldn't get the ball in the net.

Having just six points from our opening seven games, we really need to start winning games to push up the table and challenge for the top spot. We need to push forward and take this team to the next level and that will need to happen on Saturday night.

The Town need a win against Shelbourne but the club also need all our fans to come out and show their support in this difficult period.