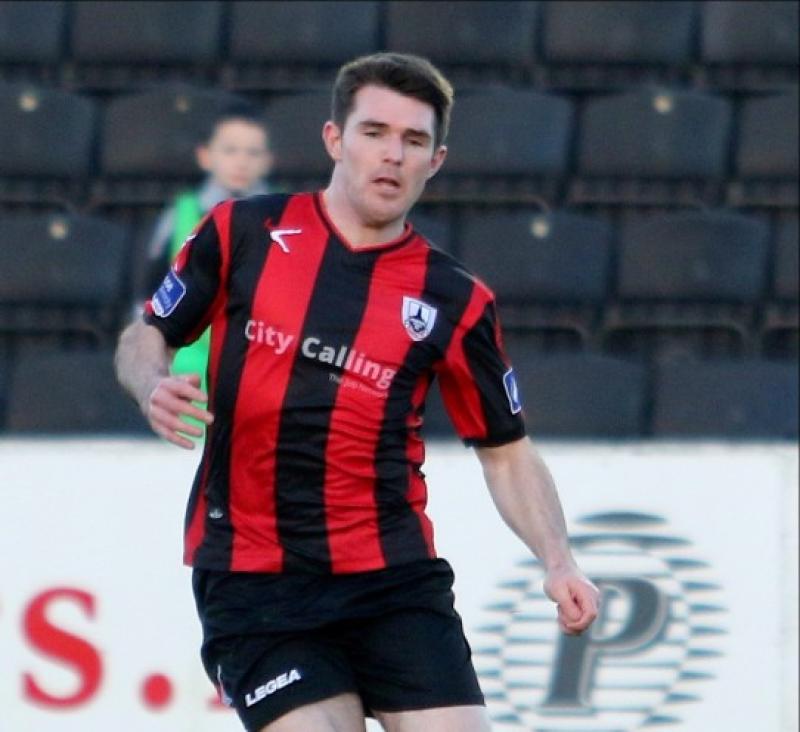 David O'Sullivan, who scored three goals for Longford Town in the exciting win over Athlone in the EA Sports Cup first round game.

Cody Mulhall’s goal six minutes from time earned Longford Town a place in the next round of the EA Sports Cup after a thrilling win over Athlone at the Lissywollen grounds on Tuesday evening week last.

Striker David O’Sullivan was the star of the show in hitting a hat-trick as the Town came from 2-0 down to eventually get the better of the neighbouring rivals in a cracking contest.

O’Sullivan’s goal rush left the sides on level terms before Mulhall found the back of the net in the 84th minute to clinch a remarkable victory and a second round showdown away to Shelbourne on Easter Monday, kick-off 7pm.

It was O’Sullivan’s second hat-trick against Athlone this season after making the same major impact in the league clash between the midland clubs at the same venue last month.

Athlone had made a great start to the game and were two up by the 34th minute with goals from Conor Barry (penalty) and Cormac Raftery before O’Sullivan struck for his first goal in the 35th minute. His second goal in the 69th minute left Longford level but Athlone went back in front one minute later through substitute Walter Invernizzi.

It was hectic stuff and after O’Sullivan  equalised for Longford the 73rd minute it was Mulhall who grabbed a late winner to complete a terrific comeback.

There was just seven minutes gone on the clock when Athlone broke the deadlock; Stephen Walsh took down Ryan Gaffey in the box and Barry scored from the penalty spot though Longford keeper Jack Brady was unlucky not to prevent the ball from going into the net.

Longford enjoyed plenty of possession after that but they had no end product. In the 34th minute Athlone doubled their advantage through Cormac Raftery but straight away Longford pulled a goal back when O’Sullivan struck.

Aidan Friel and O’Sullivan had chances to level for the Town but failed to find the target as the visitors went in trailing 2-1 at the break.

Ethan Keogh had an effort for Athlone in the 48th minute that was saved by Longford keeper Jack Brady and while Longford had chances they failed to trouble Athlone netminder Conor Gleeson.

The Town continued to press for an equaliser but it was Athlone that nearly scored again when Dragos Sfrijan’s shot just went the wrong side of the post. The sides were all square in  the 69th minute when David O’Sullivan found the back of the net with an excellent strike.

Athlone went back in front one minute later when Walter Invernizzi got past two Longford defenders on his way to slotting the ball beyond opposing keeper  Brady.

The ding-dong battle continued and in the 73rd minute O’Sullivan scored his third goal when he lobbed the ball over Athlone keeper Gleeson with a composed finish.

Longford sensed they could get a winner and piled on the pressure which  paid off in the 84th minute when Cody Mulhall got past an Athlone defender to shoot low between Gleeson’s legs to settle the issue.