Disappointing defeat as Longford Town slip up against Shelbourne 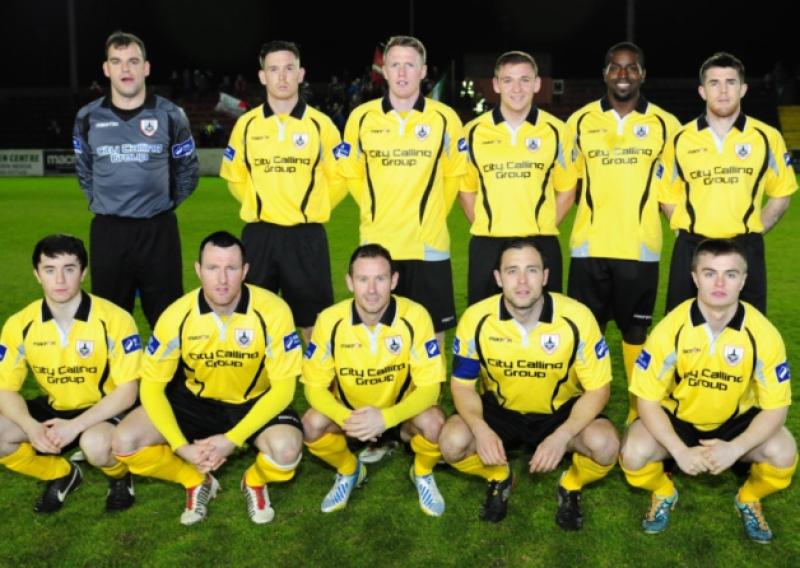 Longford Town’s first home game of the season ended in their first defeat of the season as a first half strike from Jordan Keegan claimed the win for Shelbourne in the Airtricity League First Division clash at City Calling Stadium on Saturday night last.

Longford Town’s first home game of the season ended in their first defeat of the season as a first half strike from Jordan Keegan claimed the win for Shelbourne in the Airtricity League First Division clash at City Calling Stadium on Saturday night last.

The goal came straight after Town had created a chance of their own; Lorcan Shannon went racing down the wing, took a shot but it was saved by the feet of Shels keeper Greg Murray. The visitors broke and it resulted in Keegan firing past Chris Bennion in the 11th minute.

That early goal allowed Shels to sit back and soak up the pressure with Town creating numerous opportunities throughout but they couldn’t find the back of the net.

Town boss Tony Cousins was frustrated with how the game went: “It was a very frustrating night. I thought they started very well and I thought we were a little bit shell-shocked the first 20 minutes. From us nearly taking the lead they counter attacked and got the goal. Then after that it was just wave after wave of attacks from us. Some nights the ball just won’t go in and unfortunately tonight was just one of those nights,” he told the Leader.

Watched by an attendance in the region of 600, Shels took the game to Longford from the start and created a few chances inside the opening minutes. After weathering the storm the Town started to get into the game and their best chance came in the 11th minute through Shannon who was unlucky with his effort. It proved costly because Shels broke down the field immediately and a nice ball into Keegan ended with him finishing the ball to the net.

It buoyed up Shels and in the 19th minute Keegan had a chance to grab his second goal but Bennion saved. In the 25th minute Town had a chance; David O’Sullivan played a neat ball into Don Cowan but he blasted his shot over the bar.

Minutes after the Town had another chance but Peter Hynes’ strike was saved by Shels keeper Murray. Longford continued to create opportunities but their end product let them down. And in the 38th minute they were nearly caught on the counter-attack again; Lee Murtagh tested Bennion but the Town netminder got down to save.

In the 41st minute Murtagh set Keegan up but Pat Sullivan did well to charge down his effort. Right on the stroke of half-time the Town should have been awarded a penalty when Don Cowan was clearly taken down in the box. The linesperson flagged for a penalty but the referee decided to give a free-kick on the edge of the box which came to nothing.

Cousins wasn’t happy that the decision went against his side: “It is very frustrating because the linesman gave the penalty and the referee overruled it without even going over and consulting with her. She is in line where Don is. Where Don went down there is just no way he could have jumped there from outside the box.”

Longford came close in the 52nd minute but Shannon’s free-kick from the left was headed over by Rhys Gorman. Their best chance came minutes later when O’Sullivan’s header came off the crossbar, the rebound fell to Kevin O’Connor but Shels keeper Murray somehow got a hand to it and pushed the ball away to safety.

As the game progressed the Town continued to press but Shels defended in numbers and soaked up the pressure. They also waited to break when the opportunity arose. In the 88th minute they could have made it 2-0; Gareth Coughlan’s curling free-kick caught out the Town defence, bounced in front of Bennion but he was able to eventually gather the ball.

In the final few minutes Longford had plenty of possession but ran out of options and Shels were able to clear the danger as they held on for the win.

Although disappointed with the result Tony Cousins admits that there is a long season ahead of them and it’s about moving on from this defeat: “It’s a long way to go, there are 26 matches remaining. I think we know at the football club that it’s not won in the first few weeks. It’s a little reminder for everybody about how hard it’s going to be. At the end of the day it has been a good start and we got to make sure we re-group during the week and look forward to Wexford away on Friday.”