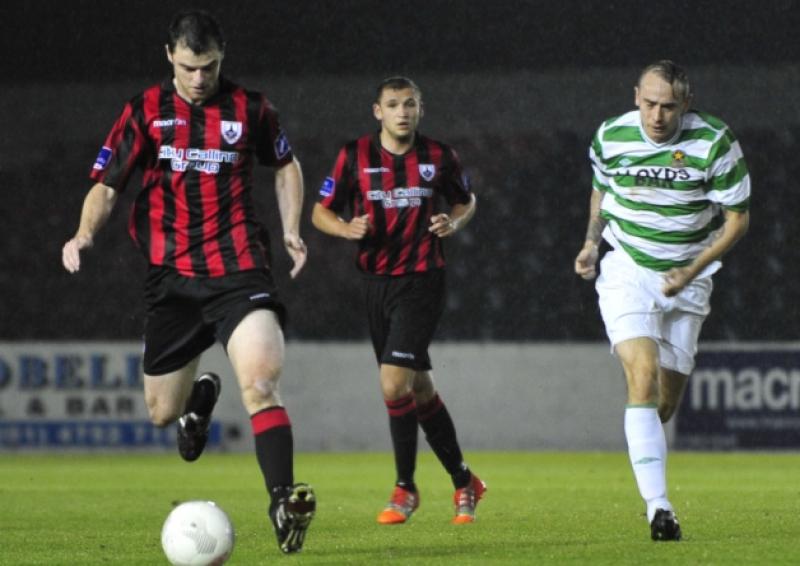 A brilliant start to the second half which yielded goals in quick succession from Ayman Ben Mohamed and Lorcan Shannon settled the FAI Cup quarter-final clash at City Calling Stadium on Friday night last.

A brilliant start to the second half which yielded goals in quick succession from Ayman Ben Mohamed and Lorcan Shannon settled the FAI Cup quarter-final clash at City Calling Stadium on Friday night last.

Longford Town shot Sheriff down to reach the semi-final for the first time since 2007 but they made hard work of beating the non-league opposition in difficult wet and windy conditions.

The Dublin outfit stunned the home supporters among the official 442 attendance when they fired home a cracking equaliser in first half stoppage time. Joseph Flood let fly with a spectacular 35 yards strike that sailed over the head of Town keeper Paul Hunt into the roof of the net.

It was a sickening blow for Longford, who had dominated the first half despite the fact that Sheriff attacker John Rock had a headed goal disallowed for an apparent infringement on Town defender Mark Rossiter in the 37th minute.

Twice in the early stages of the game Town striker David O’Sullivan had clear-cut goal chances blocked by the foot of Sheriff netminder Peter Halpin and then a well struck long range effort from Kevin O’Connor clipped the top of the crossbar.

But the Premier Division side eventually broke the deadlock in the 25th minute when David O’Sullivan, right in front of the posts, got the vital touch in a move created by Kevin O’Connor with Gary Shaw providing the pass for the opening goal.

But Sheriff scored right on the stroke of half-time to make it very interesting indeed, only for Longford to hit back immediately with hardly a minute gone on the changeover. Stephen Rice played the ball across to the always dangerous Ayman Ben Mohamed and from outside the box he planted a powerful shot into the corner of the net.

Sheriff were reeling on the ropes and the killer blow was struck in the 48th minute when Lorcan Shannon scored the third goal after latching on to a delightful through ball from Kevin O’Connor, a deserving winner of the man-of-the-match award in recognition of the major role he played in the victory.

But much to the frustration of the loyal home supporters, who braved the adverse weather on a wet night, the Town sat back on the cushion of the two-goal lead and it was Sheriff who dominated the remainder of the game.

Had the visitors managed to grab a second goal, the pressure would have been back on and Sheriff went close on a few occasions. Paul Hunt had to be very alert to deflect a long range strike from Paul Murphy over the bar in the 51st minute and the Town keeper then dealt comfortably with a weak header from Joseph Flood who was well placed to score.

Sheriff did find the back of the Longford net in the 75th minute but the goal was disallowed for offside and then substitute Darren O’Brien was narrowly off target with a long range strike.

Some very anxious moments indeed for the home side but they had done enough to reach the semi-final in remaining on course for a possible appearance in the FAI Cup decider at the Aviva Stadium, despite a very difficult last four clash away to the reigning Premier League champions Dundalk at Oriel Park on Sunday October 4th.

It was a gallant display by Sheriff YC in their quest to spring a shock but the two goals they conceded at the start of the second half proved to be a shattering setback. And their tale of woe was complete when substitute Darren O’Brien was sent-off in the 90th minute.