O’Sullivan double gets Town back on winning track 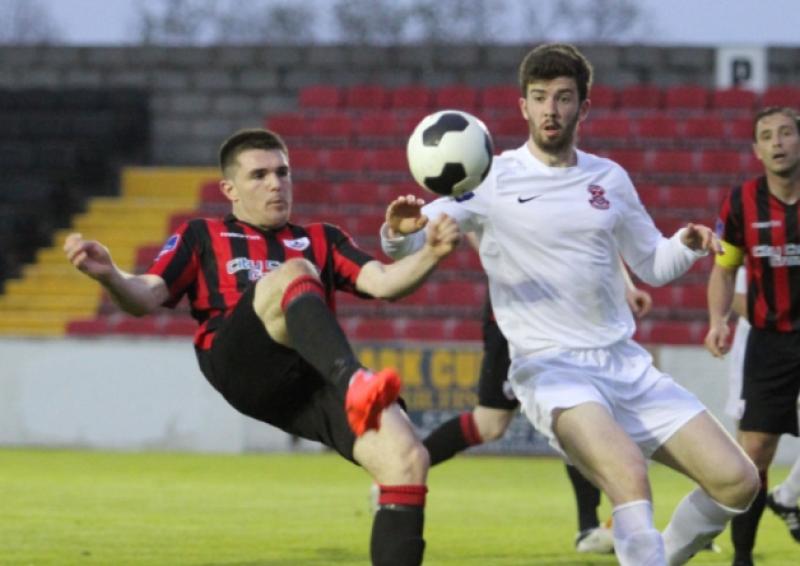 A first half double from David O’Sullivan helped Longford Town record their first league victory in a month at the expense of bottom side Cobh Ramblers on Saturday night at City Calling Stadium.

A first half double from David O’Sullivan helped Longford Town record their first league victory in a month at the expense of bottom side Cobh Ramblers on Saturday night at City Calling Stadium.

For all the chances they had throughout the game Town should’ve won this game by more with O’Sullivan very unlucky not to grab a hat-trick.

Cobh are a young side who have been struggling this season and because of the amount of Leaving Cert students unavailable for them on Saturday night they could only name three substitutes.

Although he was disappointed that his side didn’t put away many of their chances Town boss Tony Cousins was delighted with the win and the clean sheet: “We got the win and gained on everybody. We had loads of chances; it could’ve been more. Three points was the most important thing. We can move on now. These can be difficult games. There’s an expectation. It’s another clean sheet as well. We’ve had a lot of them this year, that’s the real positive thing.”

It was a strong Town line-up with Paul Hunt starting in goals in place of Chris Bennion and Pat Sullivan playing in his natural position of right-full with Noel Haverty playing in the centre of defence. Gary Shaw partnered David O’Sullivan up front and the Kildare man played very well and was unlucky not the get on the scoresheet.

Cousins explained the reason why Hunt started ahead of Bennion: “Hunty has been training well and has played well in the games he has come in for. I’m looking at training all the time, looking at everything. I just felt it was time to bring him in, he deserves a chance. We need competition for places. It’s up to Benno to step up to the plate with the competition that’s there.”

Town dominated the opening exchanges and created chances. The best opportunity came in the 6th minute; Stephen Rice’s effort hit the post, the ball came back out to Shaw but he directed his shot wide.

Minutes later O’Sullivan’s shot went across the face of the goal. In the 27th minute and against the run of play Jonathan Spillane had a chance but Pat Flynn did well to come back and clear the danger.

One minute later and Town opened the scoring with the Wicklow boys combining; left-back Willie Tyrrell played an excellent ball to O’Sullivan who from a tight angle found the back of the net with a fantastic strike.

Town created a few half chances before they doubled their advantage in the 39th minute with O’Sullivan finishing from just inside the box.

Three minutes from the break, Town had a chance to get their third goal; O’Sullivan had an effort, the loose ball fell to Jamie Mulhall but he shot wide.

O’Sullivan created another chance for the home side eight minutes into the 2nd half but his attempt was well saved by Cobh keeper Robert Birdsall. Another chance then went abegging for the Town with Shaw off target one minute later.

Cobh had the ball in the back of the net in the 69th minute but it was ruled out for offside; a Town clearance ricocheted off Alan O’Flynn and ended up in the net with the player being knocked to the ground in the process. Rice then sliced his effort wide in the 81st minute when in front of goal.

In the 84th minute Cobh had another good chance but Ryan Goldsmith’s shot was cleared off the line by Pat Flynn. Down the other end O’Sullivan headed Etanda Nkololo’s cross wide in the 87th minute.

The result pushes the Town up to fourth in the table with two games in hand. Cousins admitted he told the players not to pay heed to the table, just yet: “We didn’t get panicky when we were down where we were because it’s a false complexion of the table. I told them not to look at the table. The pessimists will tell you if you lost the two where you’ll be the optimists will tell you you’ll be second if you won the two. It’s all ifs and buts. We’ve just got to take it all in our stride. Look to the next game and don’t get ahead of ourselves.”