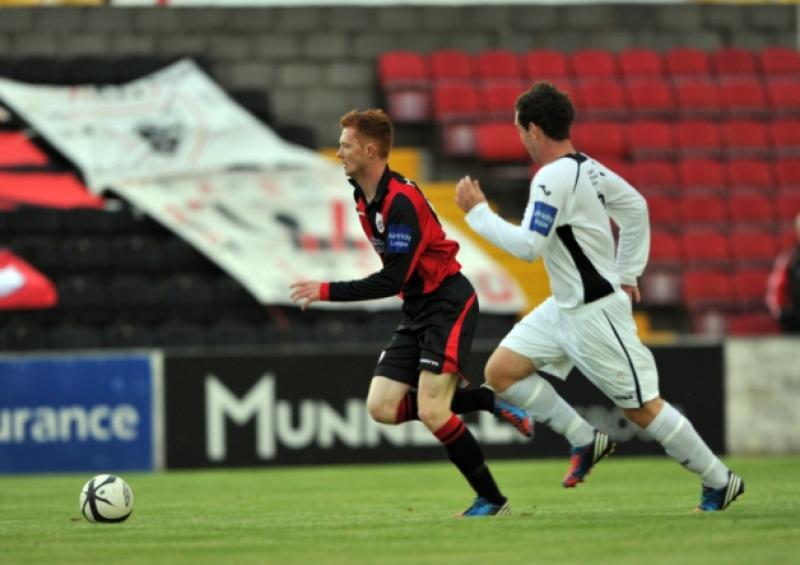 Longford Town were left to rue missed chances as their great rivals Athlone got a valuable win in the midlands derby and in doing so opened up a five point lead at the top of the First Division table going into the final series of games.

Longford Town were left to rue missed chances as their great rivals Athlone got a valuable win in the midlands derby and in doing so opened up a five point lead at the top of the First Division table going into the final series of games.

Barry Clancy got the only goal of the game in the 33rd minute in front of the biggest crowd of the season at City Calling Stadium on Saturday evening last with 1,115 the official figure. Although Longford dominated the second half they couldn’t find a way past Athlone netminder Paul Skinner.

The visitors created the first attack in the 4th minute when Mark Hughes forced Chris Bennion into making a good save. In the 31st minute Longford had a chance when Derek O’Brien’s pinpoint cross met David O’Sullivan but his header lacked real power and Skinner was able to save.

Two minutes later the deadlock was broken. Willie Tyrrell fouled Roddy Collins Jnr on the edge of the box and up stepped Clancy with the free-kick that got a slight deflection to beat Bennion.

Longford manager Tony Cousins brought Gary Shaw on at half-time and the striker made a considerable difference. Six minutes into the second half Shaw was through on goals and with just Skinner to beat his shot hit the sidenetting.

Longford continued to press and Ryan Connolly had a half chance in the 67th minute while 10 minutes later Shaw got himself into a good position but headed over the bar.

The home attacks continued and in the 79th minute a corner from O’Brien was fired in but no player could get a vital touch to the ball. Athlone broke and Enda Curran was through on goal but Corie Tracey put in an excellent tackle to clear the danger.

Longford kept pressing for that elusive equaliser. In the 86th minute Shaw brought a very good diving save out of Skinner and in the 89th minute the keeper pulled off a fantastic save to deny O’Sullivan after O’Brien had put in a perfect cross. It’s very much advantage Athlone in the title race after this result.