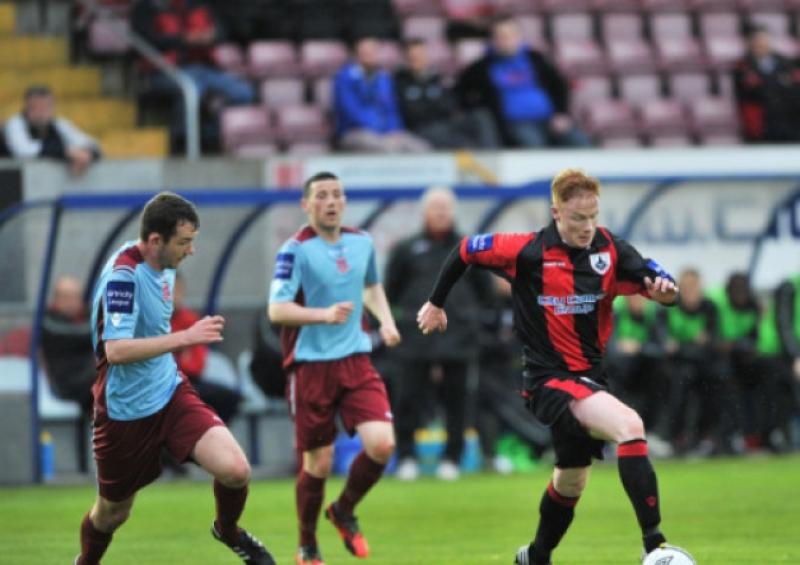 After losing their first home game of the season to Finn Harps the previous week Longford Town bounced back in superb fashion with a big win over Cobh Ramblers at City Calling Stadium on Saturday evening last.

With Harps beating Mervue on Friday night to close Town’s lead at the top to just one point, Tony Cousins side knew what they had to do. When the sides met earlier this season they served up a 4-3 thriller with Town coming away with the points at St. Colman’s Park. There were six goals this time but five of them were scored by Longford and from five different players which was a very pleasing aspect of this impressive performance.

The game was over as a contest at the break with Town 4-0 up. In the second half they sat back a little and invited Ramblers onto them and were lucky they weren’t caught out. Though, the home side did create a few more chances with substitute Josh O’Hanlon coming closest right at the end.

The Town had the ball in the net in the 6th minute; Daniel Purdy’s corner from the left was powerfully headed home by defender Willo McDonagh but referee Jim McKell ruled it out for an infringement.

Longford’s pressure eventually paid off in the 24th minute when they broke the deadlock. David O’Sullivan’s pass found Keith Gillespie and from about 25 yards out he fired an unstoppable shot past Birdsall to grab his first goal for the club.

The floodgates were open after that and two minutes later Town doubled their advantage when Gary Shaw was on target. It was 3-0 in the 36th minute; Purdy brought a good save out of Birdsall but the loose ball fell to O’Sullivan and he made no mistake for his 11th goal this season.

In the 42nd minute Purdy was just inches away from getting the fourth goal but right before the break the Town got goal number 4; Keith Quinn’s free-kick found Gary Shaw and while his effort came off the post the ball was finished to the net by Brian McCarthy.

In the early stages of the second half the Town had a chance to grab another goal; Gillespie and Quinn played a neat 1-2 before Quinn dragged his shot just wide. Then in the 55th minute Cobh were awarded a penalty when lineswoman Paula Brady adjudged that Kynan Rocks had been fouled and Martin Deady made no mistake from the spot-kick.

Ramblers were boosted by that goal and six minutes later Town keeper Chris Bennion produced an excellent save to deny winger Bobbi Donoghue. In the 70th minute Longford striker David O’Sullivan tested Birdsall once again and in the 78th minute Ramblers were reduced to 10 men when defender Sean O’Mahony was sent off for a second yellow card offence.

Longford scored a fifth goal in the 80th minute through a Daniel Purdy shot from outside the box and in the 85th minute Mark Salmon was unlucky to see his powerful strike come crashing off the crossbar.

In the 90th minute substitute Josh O’Hanlon was unfortunate not to get on the scoresheet. A long clearance out of defence fell at the feet of the young striker who raced through on goals and when Cobh keeper Birdsall came rushing out O’Hanlon decided to take a shot but his effort came off the butt of the post and Ramblers cleared the danger.