Longford Town lose out to Bray in play-off thriller 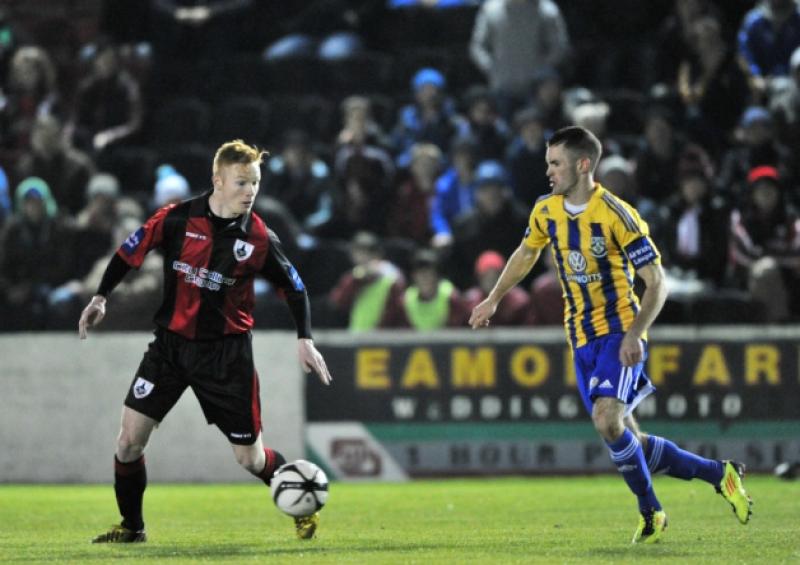 A late goal from Bray’s Kevin O’Connor on Friday night consigned Longford Town to another season in the First Division.

A late goal from Bray’s Kevin O’Connor on Friday night consigned Longford Town to another season in the First Division.

Town battled hard to get back into the game after twice falling behind but O’Connor’s late strike decided this entertaining tie.

An already stretched squad had to do without the services of Dean Ebbe for the second leg. Ebbe, who scored in the first leg on Monday, was unavailable for the return fixture. On Friday night Town could’ve done with him.

Just like their previous play-off games, Town found themselves trailing early on when Gary Dempsey scored from Conor Earley’s free in the third minute.

A minute later Town almost had the perfect response; Daniel Purdy played the ball into David O’Sullivan but Dave Webster did well to put the player under pressure.

Bray then grabbed hold of proceedings. They created chances but just couldn’t put them away. In the eighth minute Town keeper Chris Bennion made a terrific fingertip save to push out Webster’s shot. Shane O’Connor then headed just inches wide from a Kieran Marty Waters corner.

Bennion was the hero once again the 22nd minute when he used his feet to deny Webster. Minutes later Town had a chance but Gary Shaw’s glancing header went wide. The Town netminder had to be alert once again in the 29th minute, this time denying Kevin O’Connor.

Town themselves had a few half chances late in the first half but nothing troubled Bray keeper Darren Quigley. In first half additional time Bennion made a fantastic fingertip save to deny Waters.

After a sluggish start to the game Town were a different proposition after the break. Two minutes into the second half Purdy cut inside and the ball fell to defender Noel Haverty who sliced his effort wide. O’Brien then broke down the wing, and crossed to Purdy, who was just inches away from connecting with it.

On the break Bray could’ve doubled their advantage but Bennion denied Kevin O’Connor. In the 58th minute Town drew level; O’Brien did well to play the ball to Purdy, whose strike beat Quigley.

Town manager Tony Cousins then decided to take Derek O’Brien off and replace him with Josh O’Hanlon. It was a decision that proved to be a turning point in the game.

Five minutes later Bray took the lead again; Jason Byrne knocked the ball down to Waters who made no mistake with a wonderful strike. Town had a goal ruled out in the 76th minute when Josh O’Hanlon was flagged offside but were back on level terms soon after through Purdy again, who hit another fantastic shot.

The goal gave Town a lift and with much of the 2,749 crowd behind them their promotion dream was still very much alive. But Bray Wanderers never know when they are beaten in play-offs and four minutes from time O’Connor picked the ball up and unleashed a superb shot past the helpless Bennion. Town were incensed as Quinn had clearly been fouled in the build-up but their protests fell on deaf ears.

Noel Haverty and Shane O’Connor were both sent off for an off-the-ball incident just before the final whistle, and in the end Town couldn’t find that elusive equaliser to bring the game to extra time.