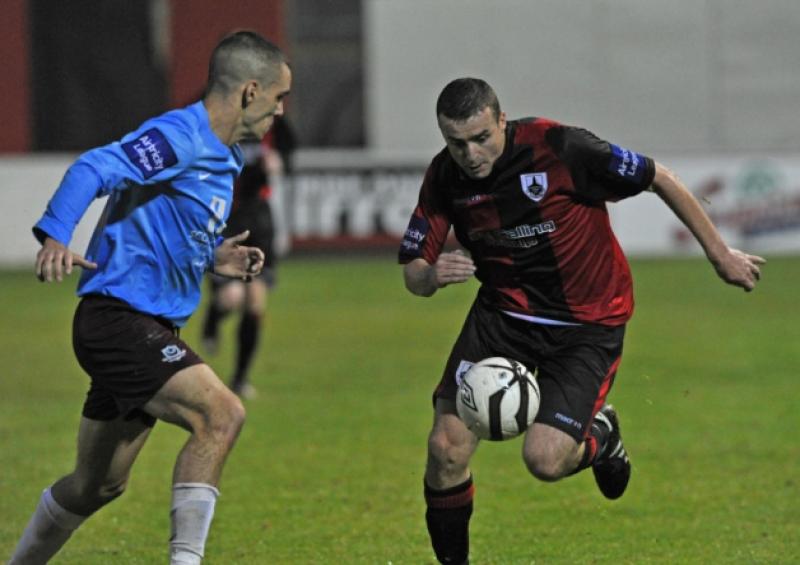 Longford Town made their exit from the FAI Cup when they were defeated by Premier Division side Drogheda United in the third round clash at City Calling Stadium on Saturday night last.

Longford Town made their exit from the FAI Cup when they were defeated by Premier Division side Drogheda United in the third round clash at City Calling Stadium on Saturday night last.

Two second half goals in less than two minutes set the Co Louth side on their way for a place in the last eight after they had fallen behind to a Brian McCarthy goal in the 17th minute.

Former Town player Cathal Brady scored a third goal for Drogheda in the 73rd minute. Derek O’Brien pulled a goal back for Longford in stoppage time but they were unable to snatch the equaliser in a frantic finish.

The home side started the game brightly and could have broken the deadlock in the 5th minute but Ryan Connolly’s cross from the left was headed wide by Gary Shaw. Drogheda had appeals for a penalty turned down in 9th minute when Ryan Brennan went down after a challenge by Keith Quinn.

Longford Town took the lead in the 17th miunte when Ryan Connolly’s corner was headed to the net by defender Brian McCarthy but Drogheda gradually began to get back into the game. In the 33rd minute Alan Byrne’s shot from outside the box went over and then two minutes later Brady’s cross was punched clear by Town keeper Chris Bennion.

Bennion pulled off a fine save one minute from the break to deny Gavin Brennan but the pressure eventually paid off for Drogheda 10 minutes into the second half when Paul O’Connor got on the end of David Cassidy’s corner to head home from close range. Just over one minute later they took the lead through defender Shane Grimes.

Drogheda continued to pile on the pressure and Town netminder Bennion pulled off an excellent save in the 65th minute to deny Cathal Brady but the winger got on the scoresheet eight minutes later.

Town substitute Josh O’Hanlon very nearly had the perfect response in the 77th minute but he dragged his shot wide. Longford did pull a goal back in stoppage time when Derek O’Brien got his first goal for the club which made for a tense finish but Drogheda held out for the win.