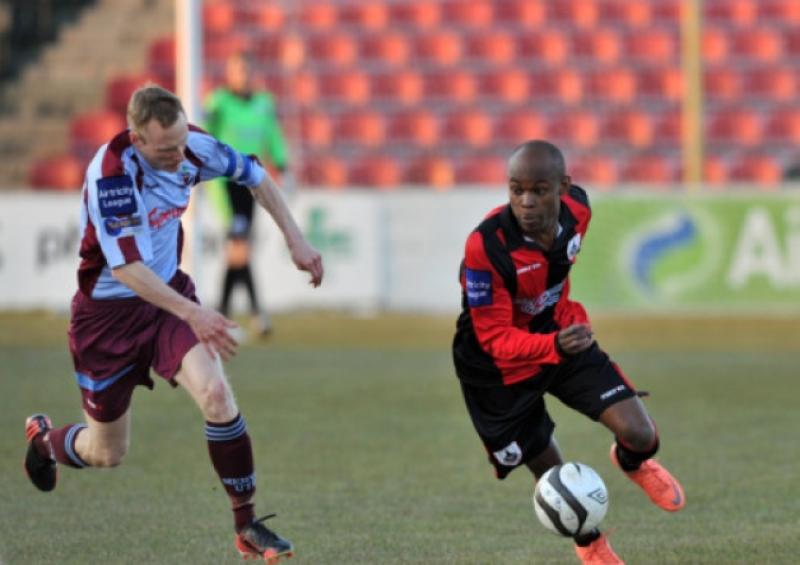 Longford Town blew a great chance of opening up a gap at the top of the First Division league table when they let a probable victory slip from their grasp and ended up having to settle for a disappointing draw against Mervue United at City Calling Stadium on Saturday evening last, although the home side almost snatched a dramatic last gasp winner through a David O’Sullivan header deep into stoppage time.

Longford Town blew a great chance of opening up a gap at the top of the First Division league table when they let a probable victory slip from their grasp and ended up having to settle for a disappointing draw against Mervue United at City Calling Stadium on Saturday evening last, although the home side almost snatched a dramatic last gasp winner through a David O’Sullivan header deep into stoppage time.

Despite the good weather conditions and no other sporting fixture of note to contend with, a bigger crowd was expected to converge on the Strokestown Road grounds to watch the league leaders in action but the official attendance was clocked at just 319 and that is a demoralising figure, to say the least.

A number of very dedicated people are working extremely hard behind the scenes in a determined bid to maintain League of Ireland football in Longford but it is clearly obvious that the club need to get out of the dreaded First Division in order to inject a new lease of life into local soccer at National level.

After taking the lead in the 13th minute through prolific top scorer David O’Sullivan (his sixth goal in five league games), the stage was apparently set for a home victory but it failed to materialise as Mervue snatched the equaliser through Jason Molloy in the 56th minute.

It was no more than the Galway club deserved for all their hard work as they continued their impressive unbeaten start to the season under influential manager Johnny Glynn and Mervue have developed into a well organised outfit who will prove a tough nut to crack.

Having said that, Longford manager Tony Cousins will view this result as two points dropped and with a strong squad at his disposal it must be said that the First Division title along with the automatic promotion place is there for the taking this season.

Hopefully, Cousins and company will not blow this glorious opportunity of getting back into the Premier Division and while the cause is currently not helped by the absence of several injured players there should be no excuses when Longford Town eventually get back to full strength.

In a week when they hit the headlines for all the wrong reasons amid the ongoing controversy surrounding the alleged match fixing crisis that is supposed to involve one of their players, the Town team should have been focused on picking up valuable points on the pitch and appeared to be going in the right direction when they broke the deadlock in the 13th minute.

Keith Gillespie delivered a defence splitting pass into the path of David O’Sullivan, who kept his composure when the ball bounced in front of him and was lethal with the finish as he directed a header beyond the advancing Mervue keeper Conor Gleeson into the back of the net.

The visitors had actually made the better start in creating a couple of half-chances and the only other decent opportunity that came Longford’s way in a scrappy first half fell to Gary Shaw who shot over the bar in the 30th minute after doing well to control the ball in front of the posts.

Mervue were eventually rewarded for their honest endeavour, 11 minutes into the second half, when the ball broke kindly for Jason Molloy inside the box and he planted a well struck shot into the corner of the net to leave the sides all square.

That was the way it remained until the final whistle, much to the sheer dismay of the loyal home supporters who watched Keith Gillespie drive a long range strike over the bar in the 68th minute and then substitute Josh O’Hanlon had a shot blocked before a penalty plea for a possible handball in the box by a Mervue defender was ignored by Tipperary referee Jim McKell.

Etanda Nkololo, who was having a busy game on the left side of midfield, weaved his way through only to have his effort blocked down in the 84th minute and the same player went close for Longford Town in stoppage time when his shot from outside the box was parried by the opposing keeper Gleeson who produced a smart save to keep his net intact.

With time almost up, the Town created another chance of winning the match when a close range header from David O’Sullivan might have sneaked into the corner of the net but alert Mervue defender Stephen Walshe cleared the danger in getting his boot to the ball right on the line in a frantic finish to an otherwise poor game.