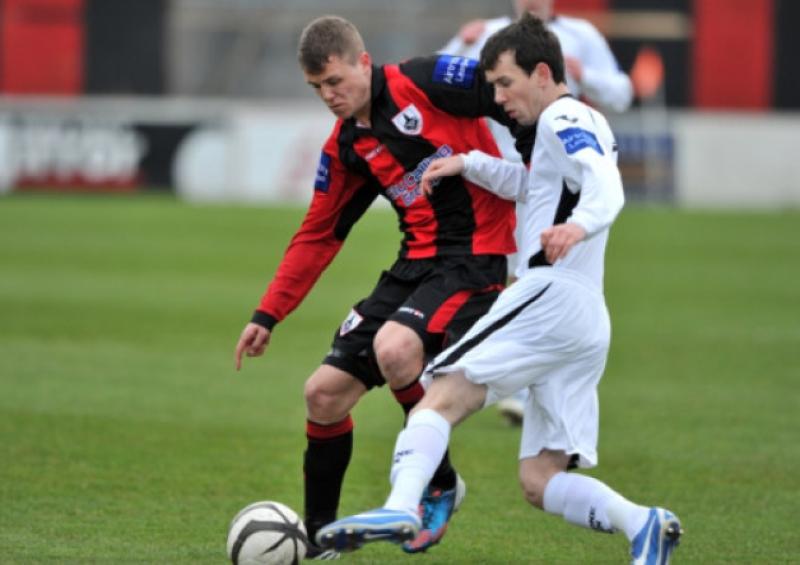 In the end it wasn’t pretty but that doesn’t matter to First Division leaders Longford Town as they finished off the first series of games with a win against their great rivals Athlone Town on Saturday evening.

Games between these two sides are affectionately known as the Midlands El Clasico but recent meetings have failed to produce classics; Saturday’s game can be added to that. The fare on show was extremely poor for the crowd of around 550 spectators at City Calling Stadium.

Longford Town have played well below par in most of their games so far this season but it’s the results that matter, not performances. After seven games they have won five, drawn one and lost just once (against Harps in a game they were unlucky not to get something out of).

As the game entered the final 10 minutes it looked like it would end up being a bore draw but Longford showed just why they are leading the way in the First Division and why they are favourites for the league title; out of nothing they scored two goals in two minutes.

Defender Noel Haverty opened the scoring in the 84th minute and two minutes later their dangerman David O’Sullivan grabbed his 8th goal in seven games. The Wicklow man has scored in every game except against Harps. He is a crucial player if Longford are to gain promotion to the Premier Division.

Athlone did pull a goal back in the 90th minute through Ian Sweeney but Longford held on for a somewhat deserved win and in doing so restored their four point lead at the top of the table.

Longford were the better side in the opening exchanges but failed to really test Athlone keeper Paul Skinner. After forcing their second corner in the 4th minute O’Sullivan headed over and one minute later the Athlone netminder had to be alert to save at the Longford striker’s feet. Minutes later David O’Neill’s shot was blocked by Ryan Coombes. Athlone had a couple of half-chances that came to nothing.

Coombes and O’Neill had chances in quick succession but failed to find the target. As half-time approached both sides had opportunities to break the deadlock; Gary Shaw brought an excellent save out of Skinner in the 43rd minute while Longford netminder Chris Bennion had to save from first Coombes and then Garbhan Coughlan.

Athlone started the second half brightly but couldn’t muster up any chances. The first shot on goal came from Longford’s Etanda Nkololo in the 57th minute but the winger dragged his effort just wide of the far post.

Bennion made a routine save from Sweeney in the 60th minute before Athlone keeper Skinner pulled off another brilliant save to once again deny Shaw and keep his goal intact. That was to be Shaw’s last action of the game as he was replaced by Josh O’Hanlon.

Longford started to up their game and dominate proceedings. After forcing another corner in the 68th minute Keith Quinn’s delivery was headed straight at Skinner by defender Willo McDonagh. In the 72nd minute O’Sullivan was unlucky not to score; Quinn with a pinpoint cross but the striker’s header just went agonisingly wide.

The finishing throughout the game left a lot to be desired and as the clocked ticked down it was evident that Athlone would be happy to thwart Longford and come away from City Calling Stadium with a point but Longford continued to press in the hope of finding a way past Skinner and that eventually happened six minutes from time.

A corner from Quinn was finished to the net from close range by Longford defender Haverty, though it appeared to get a slight deflection off an Athlone player. Two minutes later and Longford doubled their advantage; Daniel Purdy with a perfect pass to the talismatic O’Sullivan who rounded the keeper and slotted the ball home.

Out of nothing Athlone pulled a goal back through Sweeney in the 90th minute. In the dying seconds Longford nearly grabbed their third but once again Skinner made the save; this time denying O’Hanlon.

There’s a very long way to go in the league but after the first series of games things are going according to plan for Longford Town in their quest for promotion.