Home to Salthill Devon on Saturday next 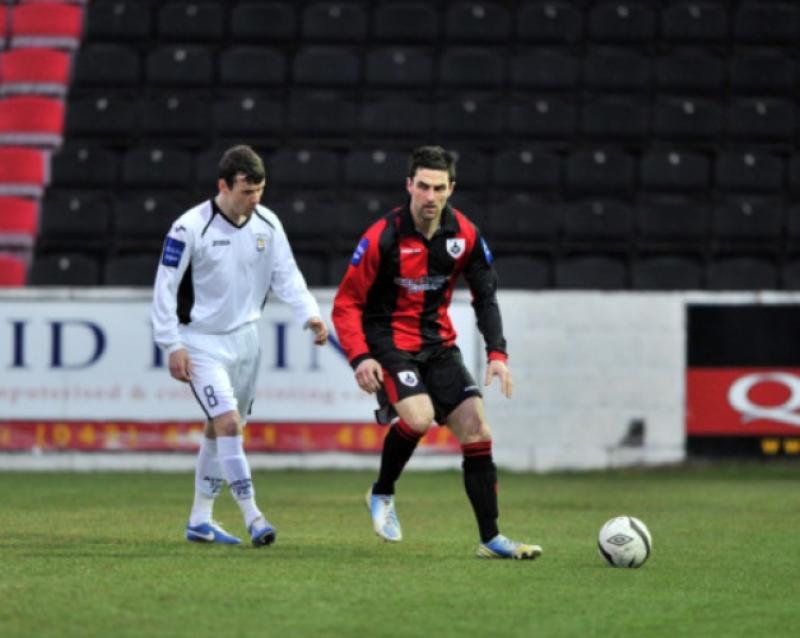 Hot on the heels of the visit of near neighbours Athlone, the Town are at home to Galway side Salthill Devon this Saturday evening at City Calling stadium, kick-off 7.30pm.

Hot on the heels of the visit of near neighbours Athlone, the Town are at home to Galway side Salthill Devon this Saturday evening at City Calling stadium, kick-off 7.30pm.

The big crowd that attended last Saturday night’s game got great value in a local derby thriller and hopefully many will return on Saturday next when we will be hoping to pick up another three points from Tony Mannion’s Salthill side.

Despite their lowly position in the league table this is not a bad Salthill side with many very good young players in their squad. To date they have only two points from a 1-1 home draw against Cobh Ramblers and a 3-3 draw away to Athlone Town. Athlone manager Roddy Collins blamed a sending off against Salthill for the draw but an Enda Curran hat-trick gave Mannion’s team a well deserved draw.

Salthill lost quite a few of their matches by the odd goal. They lost their local derby against Mervue 2-1 while they also lost to Wexford Youths on the same scoreline. They also lost their home match against Waterford United in a similar scoreline and on that occasion Waterford scored the winner in the final minute of the game.

Last weekend Salthill travelled to Donegal and by all accounts were very unlucky to leave with a 1-0 defeat after a goal from Tommy McMonagle in the 53rd minute gave Finn Harps the points. Salthill ended the game with ten men when they had Jakub Tomanica sent off in the 89th minute.

Looking at their results one has to say that this Salthill side have been unlucky on many occasions this season and the only hammering they received was on the opening day of the season when the Town won 5-0 in Drom.

That game saw Tony Cousins new look side dominate for the full ninety minutes and this match marked the introduction of David O’Sullivan to the Airtricity First Division. David helped himself to a second half hat-trick with outstanding finishing and the former Wayside Celtic player has continued his good run of scoring since then. He has scored in every league game he has played in with the exception of the Finn Harps game when we lost 1-0 to Peter Hutton’s Harps side. Salthill keeper James Keane is a very good player despite the goals against column while the defence is well marshalled by Cian Fadden and Jimmy McGlynn. Michael Harty, who previously played with Mervue United, is a very good player and they also have former Town player Jean Biansumba in their team. Colin Horgan, who was on the Republic of Ireland under 19 squad in Longford recently, is a very versatile player who could be the next exciting prospect in Irish soccer.

Last season the Town played Salthill Devon on four occasions and won twice, drew one game and lost one game. The first game which was played in Terryland Park ended up 1-1 with the goal coming from Noel Haverty. The second game between the clubs was at City Calling Stadium and it was a very closely contested match with the Town coming out on top in a 1-0 victory. The Town then won away and on that occasion the score was 3-1. Gary Shaw and Daniel Purdy scored early on and Karl Bermingham scored a very good third goal for the Town before half-time. The final match between the teams was at City Calling stadium at the end of September and it was a real disaster for the Town. Big Salthill striker Enda Curran caused havoc in the Town defence and he helped himself to goals in the 11th and 59th minute with Alan Kirby scoring a consolation goal for the Town.

That meeting between the clubs will have Tony Cousins on his guard as he plans for next Saturday night’s game at City Calling Stadium. The Town’s recent bad luck with injuries is thankfully improving by the week and that will be great news for the Town manager.

The previous week Noel Haverty made his comeback against Wexford in Ferrycarrig Park after being out for some time with an arm injury. On Saturday night last there was more good news for Tony Cousins as Keith Quinn got a clean bill of health and played on the left side of midfield and he gave a very good account of himself. The Town had to plan without Keith Gillespie who was suspended for his red card against Wexford and he will miss this week’s game as he got a two match suspension.

Young David O’Neill replaced Gillespie and he gave a good account of himself in the centre of midfield alongside captain Mark Salmon. O’Neill did well as a replacement for Keith Gillespie but his replacement Gavin Doyle also made a very good contribution also.

Ethan Nkololo did well on the right but he wasn’t getting the ball behind the Athlone defence on a regular basis. Daniel Purdy, who replaced Ethan in the second half, caused many problems for Athlone and his pass for the second goal was top class. Young Josh O’Hanlon was also introduced in the second half for Gary Shaw and he was unlucky not to score.

The Town may have won easily in Drom on the opening day of the season but it will be a much harder task on Saturday night next. It’s vital that the Town get a win against Salthill and that will keep the team ahead of their nearest rivals Harps and Mervue. After this week’s home match the Town are away to Waterford United the following Friday while the following weekend it’s home to Finn Harps and at home to Cobh Ramblers the following Saturday.