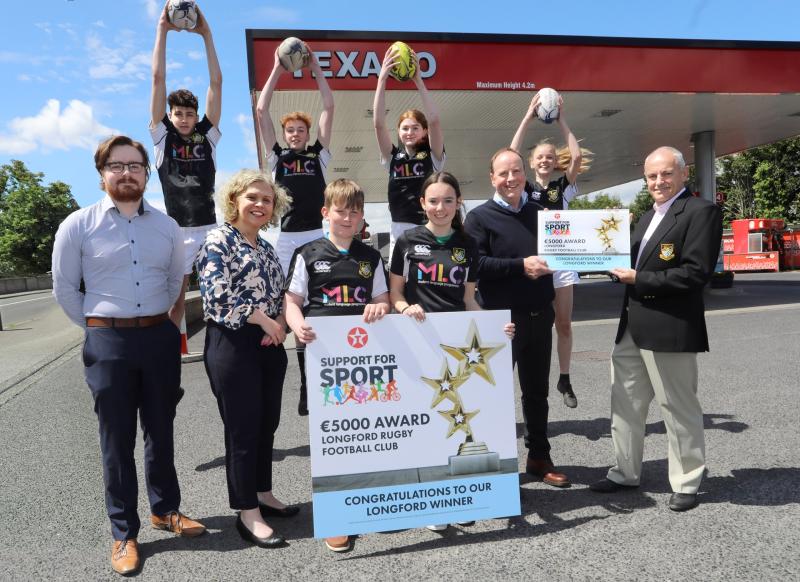 Longford Rugby Football Club, County winners in the recent Texaco Support for Sport initiative, has been presented with a cheque for €5,000 which will be used to develop its facilities by raising a third pitch to match standard through the installation of energy efficient LED floodlighting.

Based in the Demesne on the outskirts of Longford town, Longford Rugby Football Club has been serving the rugby playing community in Longford and its environs since its establishment for many years. At present, the club caters for 50 senior male and 40 senior female players in addition to some 350 boys/girls ranging in age from Under-6 to Under-18 and from which it fields some 15 teams.

Under the scheme – similar to that which proved successful last year when the Longford county award was presented to Aughnacliffe-based UCL Harps FC – the presentation was made to the Club by Valero Energy (Ireland) Limited, the company that markets fuel in Ireland under the Texaco brand.

Now in its second year, the Texaco Support for Sport initiative sees an annual fund of EUR130,000  set aside for allocation in equal amounts of EUR5,000 to successful applicants chosen on a county-by-county basis.  Overseeing the adjudication process was Texaco Support for Sport ambassador, former Irish rugby international and broadcaster, Donncha O’Callaghan.

Entries to the Texaco Support for Sport 2023 initiative will open this Autumn.