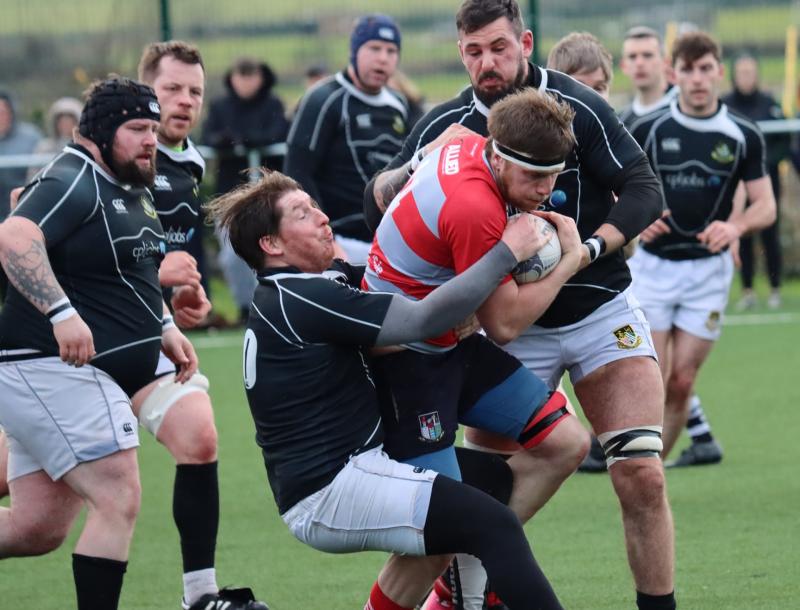 Longford left it very late to secure a one point victory at home against Mullingar at CPL Park on Sunday last to keep alive their hopes of avoiding a relegation play-off in Division 1B of the Leinster League.

Longford looked in control midway through the second half, when going 21-11 ahead, but Mullingar came storming back.

This game was one for the neutrals and a great advertisement for club rugby with both teams giving their all in a fascinating contest.  Longford got the perfect start when winning possession from the kick off they started to build pressure.

Eventually they worked it to the right and bearing down on the line Joe McGowan put a deft kick through, which was gathered by the onrushing Cormac Hughes, who dotted the ball down under the posts, 7-0 after 4 minutes.

A bit of kick tennis followed, with Mullingar coming out the better, moving into Longford territory and eventually earning a penalty, which was kicked to the corner.  Longford’s initial maul defence was good but Mullingar worked the ball  well to create an opening on their way to going into the corner for an unconverted try.

Longford then came into their best patch of the game, where they consistently enjoyed possession and territory but struggled to cross the whitewash mainly due to tenacious Mullingar defence accompanied by the concession of multiple penalties.

However, after multiple phases, Longford No.8 Aaron Beirne crashed through under the posts taking a couple of defenders with him, to dot down for a converted try 25 minutes in.

As became the pattern in this helter skelter match, Mullingar now came back at Longford.  Some brilliant defence from Longford repelled an assault on their line earning a goal line drop out.  However, Mullingar eventually earned a kickable penalty to peg the score back to 14-08.

Longford then had another good chance when a nice chip through put Mullingar under pressure.  Nevertheless, it was the away side that struck again before the half time whistle earning another kickable penalty to leave the half time score at 14-11.  So all was to play for in the second half.

The large crowd felt that the first score of the second half would be important and gratefully this was accomplished by the home side 10 minutes in from a beautiful scrum half snipe from Finbarr McGowan after huge pressure from Longford, converted by his brother Joe to stretch Longford’s lead to 10 points.

The home side were looking good at this point for a vital win in the relegation battle but Mullingar had other ideas.  They seriously upped the ante and while it was not all Mullingar the Longford line was under substantial pressure at times and eventually was breached with 15 minutes to go for a converted try to leave the score line at 21-18.

At this point things went from bad to worse for Longford as Benny McManus was hit with a yellow card on the basis of the concession of multiple penalties from Longford.

Mullingar certainly had the wind in their sails at this point and were determined to turn the screw on 14 man Longford.  With just 6 minutes to go, it looked like to the world that they had done so, when they went in for an unconverted try right in the corner, to go into the lead for the first time in the game 21-23.

It did not look good for Longford when Mullingar got a clean line break following the kick-off.  However, this Longford team were not going to be beaten.  They turned over the ball and started to work their way up the pitch.

Another penalty was awarded, which was quickly tapped by Cormac Hughes who fought into the Mullingar 22.  Longford were then patient working their way towards the Mullingar try line, eventually earning a penalty just to the right of the Mullingar posts, 10 metres out, which was coolly slotted over by Joe McGowan ushering in the full time whistle and a one point win for Longford.

They now go to Cill Dara in their last league match of the season knowing that a win should  be enough to move Longford out of the relegation play-off position and securing the right to ply their trade in Leinster League 1B again next season.

Big last league game away to Cill Dara on Sunday

Longford travel to Kildare on Sunday to take on Cill Dara in their last league game of the season knowing that after beating Mullingar that they need at least a win to be in with a good chance of avoiding a relegation play-off.

There are a number of different scenarios however, what is clear is that Longford need to better the results of either Mullingar or Tullow with a win the absolute minimum required. Cill Dara is a tough place to go so all travelling support possible would be appreciated.