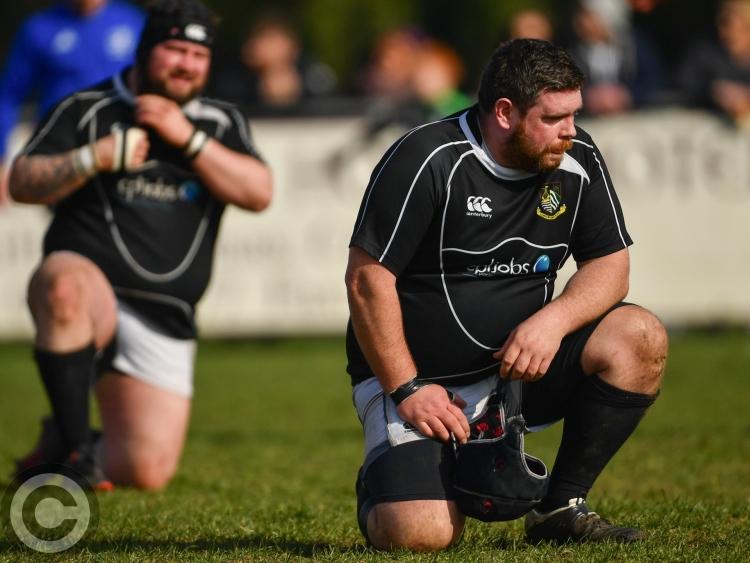 Bitter disappointment for Longford RFC player Liam Brady in the aftermath of the defeat against Wicklow RFC in the Bank of Ireland Provincial Towns Rugby Cup semi-final. Pic: Ramsey Cardy/Sportsfile

Longford Senior Men’s epic season came to an end as they fell at the semi-final hurdle in the Provincial Towns Cup.  Longford gave as good as they got against a Wicklow wide who finished second in Division 1A this season.

However, it was the ability of the men from the Garden County to take their chances that earned them the win and the chance to compete against Enniscorthy for the Towns Cup on April 28th.

The setting for the match on Sunday last was Naas RFC as all semi-finals are played at neutral venues.  It was a nice day with a strong breeze blowing down the pitch towards the bottom corner.

Longford were playing against the wind in the first half which made achieving territory from the boot difficult.  After about five minutes of sustained attack, Longford turned over the ball and cleared their line.

Longford then had a good period of their own pressure where they kicked to the corner and put sustained pressure on the Wicklow line.  Unfortunately, as it was to be for the whole game, Longford could not find a big enough gap in the Wicklow defence to cross the whitewash and the ball was then turned over.

Wicklow came back down the pitch and after a period of pressure their out half Niall Earls knocked over a drop goal to open the scoring on twenty two minutes.  It was a well taken chance and reflected the more clinical nature of Wicklow’s attack on a day that both defences left very few gaps.

After a period of Longford pressure, Wicklow began to turn the screw before half-time.  The referee awarded a number of penalties to Wicklow and eventually went to his pocket for a yellow card.  The unlucky recipient was Longford hooker Hubie Connolly.

Longford brought on replacement hooker Philly Dardis and sacrificed Liam Harte on the wing for the ten minute period.  Wicklow opted for a scrum and spread the ball wide where they made their extra player count when full back Ben Porter crossed for an unconverted try to leave Longford facing an eight point deficit at half-time, 8-0.

Longford were down but definitely not out and would have felt confident about giving Wicklow a stern second half examination, especially with the wind at their backs.  Things did not go to plan when the Wicklow out-half knocked over a penalty after only four minutes to push their lead out to eleven points.

However, with Longford restored to fifteen players and Colm Glynn coming on at out-half they began to take control.  After twelve minutes Ryan McHugh knocked over a penalty to get Longford on the scoreboard and the Wicklow blindside flanker took a trip to the bin for a neck roll.

This galvanised Longford and their moment came on in the 70th minute when second row Daire O’Brien found a gap and was hauled down just short of the line.

It looked like it was only a matter of time until Longford scored but Wicklow turned the ball over and the disorganised Longford defence could not handle the speed of Wicklow winger Adam Cullen who went straight down the pitch and was hauled down just short of the line with Wicklow eventually crossing for another unconverted try to lead 16-3.

It was going to be Wicklow’s day at this point with the clock ticking down.  To their credit Longford never dropped their heads and should have had another score but again the Wicklow defence held firm.  So ultimately it was Wicklow who claimed the victory and head to the final against Enniscorthy.

It was a very good match and one that Longford can take a lot from.  Over the course of the last few months Longford have shown that can compete well with Division 1A sides.

The main thing Longford need to work on is their clinical edge and turning possession and territory into points.  All eyes are on the conclusion of the AIL and Round Robin next week. Enniscorthy need one more win versus Connemara to secure promotion to the AIL.  If this happens in tandem with Tullamore and Seapoint avoiding relegation from the AIL (they both have home matches) then Longford will be promoted to 1A for next season along with Suttonians.

It would be a fitting reward for an epic season of rugby where Longford enjoyed a record number of wins.

“We came up short  against the second best team in Leinster junior rugby. Going by the league places we are 8 places apart but I thought we hung in for the fight. And even at 11-3 down we were on the line and didn’t score, they go up the other end and score and it’s a long way back.

“Had we taken that score it’s probably 11-10 and we have momentum, it’s a different game. But, while for the group the defeat against Bective last week was massively painful, we again didn’t execute the scoring chances we created against Wicklow and from me that’s disappointing, because we spent a lot of this week looking at how we execute under those pressure times.

“But I am incredibly proud of what the group have achieved this season, and to push a Wicklow team with some real good individuals in them all the way  at times, you can only be proud. Of course we expected to do well because we have high standards on ourselves now, and because of that the boys are disappointed in there now.

“I’m sure it will be a cracker of a final with Wicklow and Enniscorthy but we thought we were good enough to be in there with Enniscorthy. We fully expected to be training next week in prep for a Cup final. I’m extremely proud of the commitment the boys gave throughout this season and I asked questions and pushed the group and they always gave answers. They are a tight, great bunch to work with and they have been a pleasure to go on this journey with.

“And I know it’s so soon since our season has finished now but 2nd in the league is an improvement on last season’s 3rd and the last 4 in the cup only means the graph is going in the right direction. With so many young Longford guys in the group it’s a positive for the club. And the door isn’t shut on us getting promoted to 1A footy next season yet if results go the right way, we will know more in a couple of weeks.”