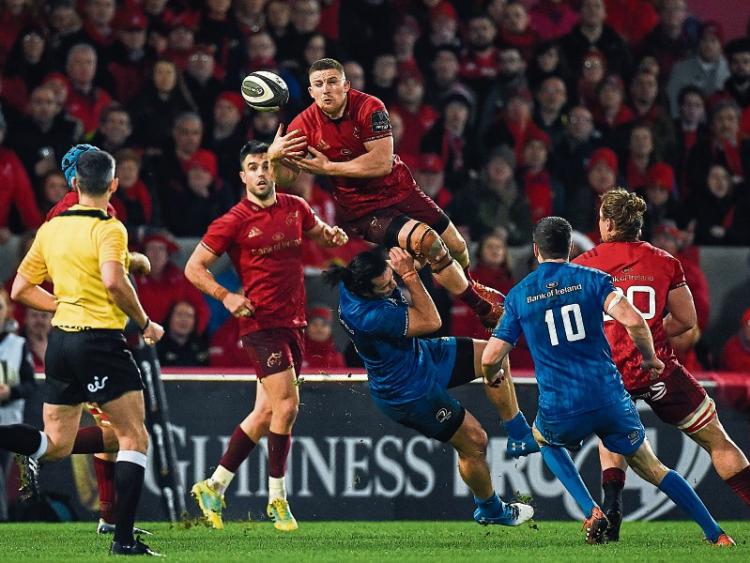 MUNSTER claimed only their second win over Leinster in nine meetings after securing an enthralling 26-17 win in their feisty Guinness PRO14 derby interprovincial before a sold-out attendance at Thomond Park on Saturday night.

It wasn’t until winger Keith Earls struck for a game-clinching intercept try in the 74th minute that Munster could be sure of finally seeing off their arch rivals who played the final 50 minutes of the game with 14-men following the red-carding of winger James Lowe.

Lowe was dismissed for taking Andrew Conway out in the air as he jumped to collect a high ball. Leinster were left to rue an ill-disciplined first half display which saw props Cian Healy and Tadhg Furlong sin-binned.

Munster struggled to put Leinster away in the third quarter despite their man advantage and Leo Cullen’s side drew within six points, 16-10, after a 49th minute converted try.

However, Joey Carbery’s third penalty of the game and Earls’ late try sealed a much-needed win for Munster against their great rivals.

This was Munser’s first win over Leinster since their 29-17 success at Thomond Park on St. Stephen's Day 2016

This was feisty and full-blooded right from the kick-off.

Despite the visitors dominating both possession and territory in the opening minutes, Munster took the lead in the 15th minute, From a penalty awarded for a high tackle on Chris Cloete close to the touchline, the home side opted for a kick-to touch.

Munster impressively claimed the line-out and South African flanker Cloete was driven over the try line off a well-executed maui.

Carbery superbly added the conversion and suddenly Munster’s lead was out to 7-0.

James Lowe sent off at Thomond Park. Leinster are down to 14.

However, it was Leinster who grabbed the next score when out-half Sexton landed a 24th minute penalty for 7-3.

Leinster lost a second player to the sin-bin in the 29th minute when Tadhg Furlong was yellow-carded for a high, no arms tackle on Cloete. It could well have been red. Cloete was removed from the pitch on a motorised stretcher.

Leinster’s ill-discipline came back to haunt them further in the 34th minute when referee Frank Murphy red-carded winger James Lowe for taking Andrew Conway out on the air as he looked to catch a high ball. Leinster were now down to 13 players at Thomond Park.

Munster added a penalty goal through Carbery soon after as the home side opted for a shot at goal rather than a kick to the corner against their visitors.

Carbery added a 39th minute penalty goal after a Leinster player was penalised for not rolling away and suddenly the home side’s lead had stretched to 13-3 at the mid-point.

That should be that at Thomond as Keith Earls intercepts and races clear to score his 51st Munster try.

The penalty count against Leinster was up at 10 by half-time, while Munster were pinged just four times in that opening half.

And Leinster conceded their 11th penalty within three minutes of the restart and Carbery made them pay when landing his fourth successful kick of the evening for a 16-3 lead.

To their credit, Leinster hit back strongly and following two penalties in quick succession inside the Munster ‘22, their pack mauled their way over the tryline in the 49th minute with their hooker James Tracy awarded the touchdown.

Sexton’s conversion made it 16-10 and game very much on again.

The Ireland out-half and World Player of the Year was replaced on the hour mark as Leinster introduced Ciaran Frawley to the play-maker role for the final quarter.

Leinster were pinged for off-side in midfield soon after and Carbery kicked Munster back into a two-score lead at 19-10 after 64 minutes.

The home side strike first at Thomond.

Earls intercept try finally ended any hopes Leinster may have had of staging the kind of dramatic comeback that left Connacht shell-shocked at the RDS seven days earlier.

The visitors did manage a late consolation try through, Max Deegan, with Ciaran Frawley’s conversion making it a nine-point game.

Next up for Munster is a trip to the Sportsgound in Galway next Saturday evening for another big interprovincial clash, 7.35pm.