Glenn Baskett’s unbeaten side away to Suttonians on Sunday 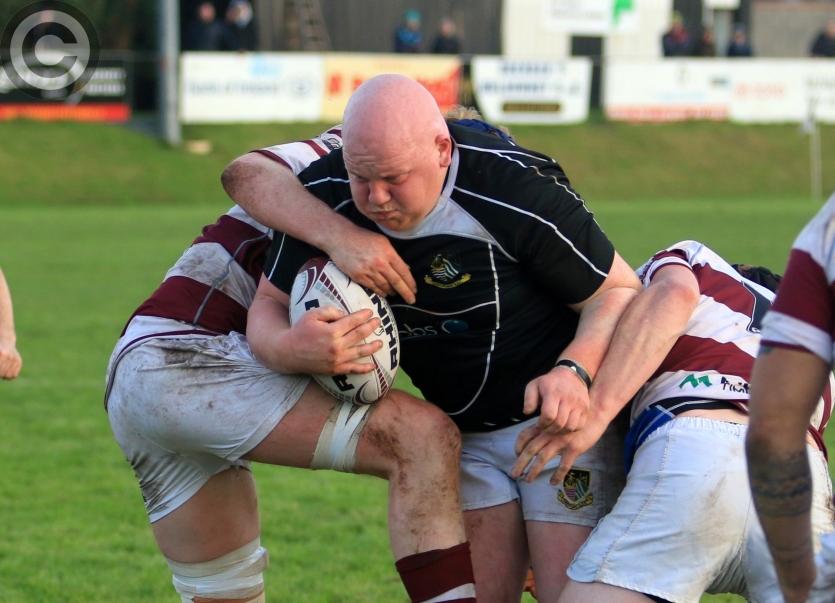 Padraig O'Farrell pictured in action for Longford against Tullow in the Leinster Rugby League Division 1B game at CPL Park on Sunday last. Photo: Syl Healy

Longford First XV continued their superb start to their Leinster League 1B Campaign by yet again coming back from behind to score a great win over Tullow at CPL Park on Sunday last in moving to the top of the table with five wins from five games.

This Longford team like doing things the hard way and 35 minutes into the first half it looked a long way back for a home side who were 7-20 down with only a minute to play in the first half.

However, one thing this Longford side have is belief and even though everything seemed to be going against them, they worked their way back into the game and ultimately ran out deserved victors.

A big turning point in the match was the Tullow No. 13 receiving a yellow card after hitting Longford Full Back Sammy Murphy in the air just before halftime.  Longford then went down the pitch and scored a well worked try by Joe McGowan in the corner to peg the score back to 14-20 at half-time.

The start of the match was very different with Tullow coming out of the traps very quickly and largely confined Longford to their half and even 22 for most of the first 40 minutes.  Tullow applied a lot of pressure to a Longford side, who like previous matches, took time to settle and seemed and force a lot of passes/plays.

Tullow struck first after seven minutes with a penalty to go 0-3 into the lead.  They added another penalty on thirteen minutes to nudge them 0-6 to the better. The away side were throwing the veritable kitchen sink at Longford in the first half and will be disappointed not to have got more from a dominant spell in the first 25 minutes.

Nevertheless, this Longford side have been ruthless this season in converting any chances they have been given. They struck for a try through centre Shane Rodgers after 27 minutes after some great inside passes and interplay in their first incision into the Tullow 22 of the match to put them 7-6 into the lead.

In spite of this, Tullow came right back at Longford and went over for two tries in the space of five minutes to make it look a very long way back for a Longford side that were operating on the back foot due to the level of Tullow’s intensity.  However, the try by McGowan at half time closed the gap and made it all to play for in the second half.

In a carbon copy of Tullow’s first half, Longford came out of the traps with serious intensity at the start of the second half and showed the combination of powerful forward play and enterprising back movement that had propelled them to a winning start to the season.

The Tullow yellow card cost them dearly as Captain Neal Farrell went over five minutes into the second half for Longford’s third try to inch them ahead for the second time in the match 21-20. Longford took a firm grip on the game and a four try bonus point not long after as Shane Rodgers bagged his second try of the match along with a great touchline conversion from out-half, Ryan McHugh to push Longford into a 28-20 lead.

To their credit Tullow came right back at Longford and looked to have shifted the momentum back in their favour when Longford second row, Anthony Hughes made a 10 minute trip to the Sin Bin after a period of sustained Tullow pressure.

They knocked over a penalty with 10 minutes to go to move them back within a one score range of Longford, which decidedly gave a ‘game on feeling’ to the closing period. Nonetheless, Longford were not be denied with a great solo effort by the evergreen Colm Glynn sealing a fantastic bonus point win and sending Longford to the top of the league for the first time of season.

Like previous matches it was a team effort that hauled Longford back into contention, however the great contribution in attack and defence by the centre pairing of Glynn and Rodgers must be specially highlighted.

Longford head into the top of the table clash on Sunday against Suttonians in Dublin 13 with a pep in their step after their brilliant start to the season.  Without a doubt everyone involved will know that a very tough task faces Longford, as Suttonians were the only side to secure two wins last season against a Longford side that finished in third, one place behind them in last year’s Division 1B.

As always, your travelling support would be much appreciated.