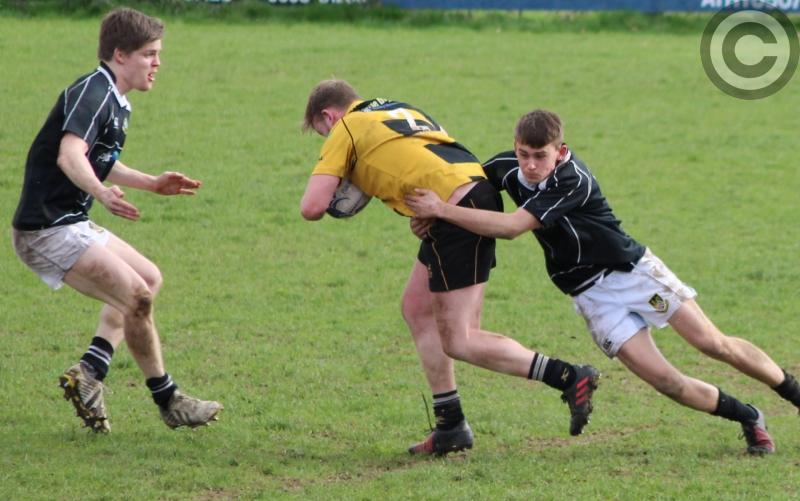 Hubie Connolly and Daniel McHugh pictured in action for Longford RFC against Wexford at CPL Park on Sunday last.

Longford First XV extended their season with a comprehensive win over Wexford Wanderers in the second round of the Leinster Towns Plate at CPL Park on Sunday last.

This was a tough task for the home team as a number of casualties meant that they had to plumb the full depths of the panel. Wexford have been plying their trade in the Leinster League Division 2B so it has been a while since the two sides last encountered each other. The south east club finished second in their league this year after a very good season.

Longford were missing four first team starters at the outset through injury and during the course of the game Ciaran Kennedy and Derek Farrell were forced to retire due to injury.

The absence of so many players disrupted the performance and Longford did not reach the heights of some recent league wins. Most of the home team's scores came in the first half with Cormac Hughes being the first to cross the try line.

The centres score's were augmented by two penalties before Wanderers replied with one of their own. Derek Farrell pushed the score out to 20-03 before the break.

Playing against a strong breeze in the second half Longford had to defend for long periods. Despite this pressure they exuded a control that meant they never really looked in danger. Wexford did get in under the post for a try to bring the score to 20 points to 10 going into last 15 minutes but a further try for Longford brought the lead back to a comfortable 17 points.

Longford saw out the remainder of the game with relative ease and secured at least another week of rugby.

Next up in the Towns Plate is another Division 2B side as Athy come to town. Again Longford will be playing this game in CPL Park, so to continue the season the club are calling for as many people as possible to come along and support. The kick-off next Sunday is 3pm.