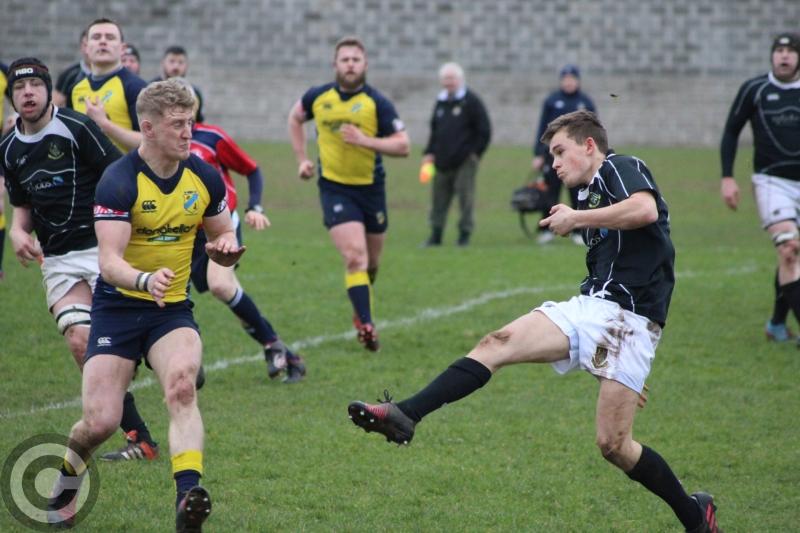 Longford RFC out half Daniel McHugh pictured in action against Clondalkin, supported by Barry Stewart, in the Provincial Towns Cup second round game in Dublin on Sunday last.

Longford's Towns Cup aspirations were dashed in Gordon Park, Kingswood on Sunday last when Division 1B side Clondalkin put in a strong final 10 minutes to clinch victory in a cracking contest.

A large Longford contingent made their way to West Dublin but the home team managed to come out on top.  There have been a number of close games between the sides in the last six years, but this time Clondalkin took the spoils.

Longford commanded much of the game but a lack of focus at the start of the second half put them in the back seat and they struggled to reassert themselves.

With five minutes to play, and just one point between them, Longford were right in contention but Clondalkin ran in a try to settle the issue. Clondalkin boasted a number of Leinster Junior players from last year's Inter Pro squad including the formidable Paul Nolan in the second row and dynamic wing forward Nial Finlay.

Over the course of the 80 minutes Clondalkin crossed the try line three times, compared to Longford's two, but it was the penalty count that killed the visitors gallant challenge.

It was a game played in ideal conditions with a slight breeze blowing across the fine surface. All indications were that this was going to be a thrilling clash and the Longford team did their best to entertain those who made the effort to get to Gordon Park Kingswood.

The tempo of the game was high right from the off. The forwards worked hard to ensure that the ruck ball was fast and clever lines of attack coupled with good support runs ensured positive progression by Longford.

With the game just 10 minutes old outhalf Colm Glynn unlatched the Clondalkin defence 30 metres out. The 10's run was supported by Benny McManus who took the pass five metres from the line and powered over to make it 0-5. Glynn added the conversion and Longford led 0-7.

The men in black then pressed the advantage. More ingenious attacks pushed the home team deep into uncomfortable territory. Intelligent running created opportunities that the back line looked to capitalise on. A wonderful attack by Joe McGowan looked like the lead would be extended but the final pass did not stick and Longford were denied.

Another attacking opportunity by Longford was quenched, this time by what looked like a slap down, but Clondalkin got away without a serious censure. The home side got their account opened in the 20th minute with a penalty.

Longford had another fine opportunity just before the conclusion of the first half but no score materialised with the visitors enjoying the seven point advantage.

Early in the second half Clondalkin caught Longford napping and their attack resulted in a try and conversion that levelled matters 13-13. Ten minutes later a break by the Clondalkin hooker saw him going over out wide, nudging his side in front for the first time, 18-13.

In these opening exchanges of the second half the the home team ruthlessly punished Longford slackness.

What had been great about the men in black's attack in the first half evaporated for a period as they struggled for go forward ball, failed to protect rucks with the same vigour and did not pursue support lines diligently.

Nevertheless they were still an attacking threat, but it was another penalty that pushed Clondalkin ahead 21-13. Longford respond with a wonder try finished by Joe McGowan, leaving it 21-20.

Another penalty exchange saw the scores go 24-20, 24-23 and a wrestle ensued to close the gap between the combatants.

One more penalty for Clondalkin brought it to 27-23 with less than 10 minutes to play. Longford pressed and pressed, building phases, but the pressure of attack left them exposed and a breakaway try by the home side left the final tally at 34-23.

Longford may be disappointed with the final outcome, but should take some consolation for the fact that they can mix it quite handily with a team a division above them.

There were a number of fine performance across the pitch. The usual suspects Benny McManus, Ruadhán McDonnell, Paul Gallogly and Derek Farrell were joined on the distinction list by Cormac Hughes and Daniel McHugh.