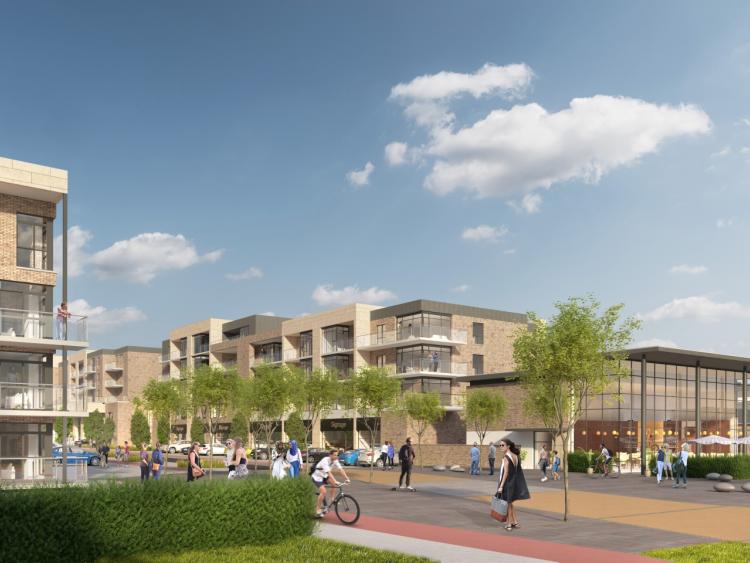 Pictures of the proposed development at Dunshaughlin

Longford based company GEM Group has welcomed the approval of planning permission by An Bord Pleanála for a Strategic Housing Development (SHD) at Dunshaughlin East, Dunshaughlin, Co. Meath.

The development will be located on a 28.3 hectare site at lands to the north of the R147 / Dublin Road in the eastern part of Dunshaughlin. It will be built on residential zoned lands and is proposed as a planned extension of the town through a ten-year planning permission. The site is located adjacent to the residential development at The Willows, which is currently under construction.

No third-party objections were raised in response to the planning application, and the site will be developed and built by GEM Group, which has over four decades of building experience in Ireland. A development plan will now be put in place for the site, with work commencing in Q4 2019, and the first homes delivered in Q3 2020.

This will be a follow on to the 222 housing units at The Willows scheme in Dunshaughlin which is currently being developed by Gem Group over the period 2017-2019. The development comprises of a whopping 913 residential units, consisting of 505 houses, 186 duplex units and 222 apartments on the site. 90 of the homes will be allocated for social housing requirements.

It will also feature neighbourhood centre facilities including a childcare centre, two retail units and a primary healthcare unit/gym. The approved application includes significant open space areas, such as playgrounds, as well as pedestrian and cycling infrastructure, making it an ideal location for first-time buyers and families. The development will also deliver a substantial section of the planned Dunshaughlin Outer Relief Road.

The Department of Education has recently agreed to acquire adjoining lands from GEM Group for a new educational campus and are shortly expected to apply for planning permission for a new primary school on the site, while new playing pitches will be provided for Dunshaughlin Youths Soccer Club in collaboration with Meath County Council, on lands to the east of the development.

The development will also integrate with existing and planned developments in the vicinity and meet the highest standards in terms of planning and energy efficiency. The development benefits from strong transport infrastructure, with a number of operators providing regular bus services from Dunshaughlin into Dublin city centre every 10-15 minutes during peak hours.

Dunshaughlin is also served by the ‘park and ride’ services at Parkway Rail Station which is just a five-minute drive to the south. The development will also support the future delivery and extension of existing rail links to Navan via Dunshaughlin, which is a transport objective for the region.

GEM Group, who have a base on the Athlone road in Longford, have been a leading new homes provider in Ireland since 1978. Having constructed thousands of homes over the past four decades, the GEM team has a reputation for quality and service, which is reflected in the satisfaction of our customers and clients.

Over the years, Gem Group has completed many notable construction and bespoke joinery projects and developments including the restoration of St. Mel’s Cathedral in Longford.