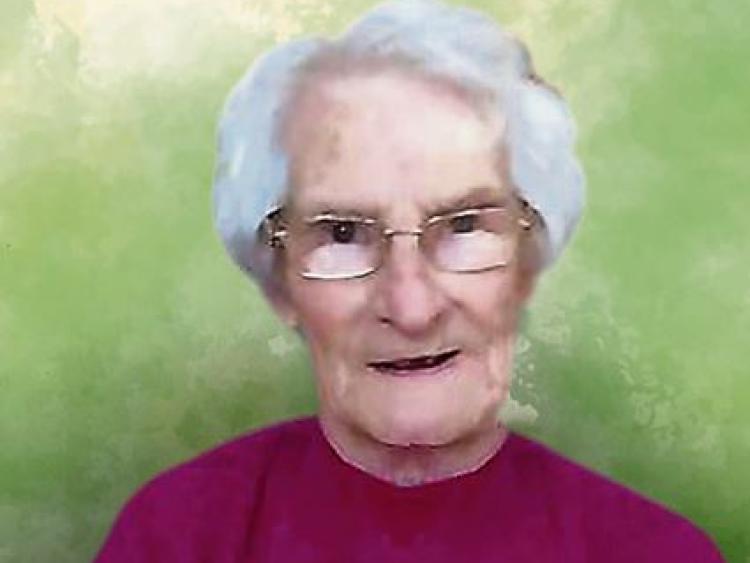 Sr Aemilian was born October 17, 1924, to Jane and James Kiernan in the townland of Roose, Ballinalee, Co Longford. She was their first child, soon to be joined by Bridie, Joan, Jimmy and Liam.

Known affectionately as Mollie, she was a playful, friendly young girl, delighting in the music and dancing which was very much part of her home.

Her father loved to play the fiddle, and encouraged his family and neighbours to join in the fun. So Aemilian had a very happy, carefree childhood steeped in faith and good neighbourliness.

After her early education in Clonbroney NS, she attended Granard and Ardagh colleges, specialising in Catering and Home Management. It was on a visit to her sister Bridie’s in-laws, the Duffys in Enniskillen, that Aemilian met Father McManus, a local curate.

He requested her to come and look after the priests in the Curates’ House. This she did with her usual care and enthusiasm, bringing her good humour and good cooking to the clerical scene. She looked back on this time of her life with fondness and frequently spoke of all the priests and their kindness.

During this time, Aemilian first saw and encountered the Enniskillen Sisters of Mercy. She was drawn to the religious life, and the priests, although sorry to lose her, encouraged her in following her dream.

So, on October 3, 1956, Aemilian entered the Convent and began her formation, together with Srs Christine and Sheila. She entered into her new life wholeheartedly, giving herself to a life of prayer and care for others.

Her first appointment outside the Convent was to St Michael’s College, looking after the priests and staff and the young students. She felt for the youngsters away from home, and always had a cheery word for them and very tasty meals.

She continued this ministry in Castleblayney Convent and in the newly-formed boarding school where she was always remembered for her good humour and good nature.

There were frequent visits too to her family home in Ballinalee, to see her mother and her brother Liam’s young family.

Tragedy struck in 1973, when Liam’s young wife, Mollie, died suddenly, leaving Liam and their three young children, Anna, Breege and Seamus. Aemilian rose to the occasion with her usual practical kindness; she cared for her elderly mother, for Liam and his young family.

When Liam died suddenly in 1979, Aemilian returned to her home and became full-time guardian of the children. She not only brought them great love and care, but also proved a prudent manager of their farm and house. She guided them carefully, encouraging them to follow their gifts and talents. She leased the farm, built a new home and gave the children a happy time, driving them to and from the local dances.

In a few years, she had the joy of attending their weddings, and seeing them set up their own homes. No wonder they called her ‘Granny Nun’.

In 1992, having nursed her elderly mother through her last years, and seeing the ‘children’ settled, Aemilian returned to the Convent in Castleblayney. She had a life’s work behind her.

True to form, she soon began another one, immersing herself in Social Services, helping with Meals on Wheels, social mornings and visitation. Once again she was to be seen on Blayney streets, laughing, chatting, among people whom she loved.

When Castleblayney Convent closed in 2012, Aemilian returned to Enniskillen, first to the Convent, and, later, as her health declined, to Millverne Residential Care and to Graan Abbey Nursing Home. Her life had come full circle.

She appreciated the kindness of the caring staff and enjoyed the regular visits from the Sisters and her loving nieces and nephews. She took delight in a new-found hobby of knitting. Prayer has always played a key role in her life. She was frequently to be found clutching a prayer-book!

In June 2020, Aemilian spent some time in South West Acute Hospital. She was visibly failing in body and mind. On her return to the Graan, she was happy and peaceful, and ready for God’s final call on June 27, 2020.

Sr Aemilian’s funeral Mass was celebrated by Monsignor Peter O’Reilly in St Michael’s Church, Enniskillen and attended by her ten nieces and nephews, by Sr Aine Campbell (Provincial Team) and Srs Edel Bannon and Mary deLacy from the Convent Enniskillen.

Her burial was in Clonbroney Cemetery, Co Longford, near her old home where she had grown up, and where she returned in her special role as ‘Granny Nun’.

Aemilian was the last surviving member of her immediate family. She was predeceased by her sisters, Bridie and Joan, her brothers Jimmy and Liam, her sisters-in-law, Margaret and Mollie, brothers-in-law, Patrick Duffy and Michael McLoughlin and her nephew, Kevin McLoughlin.

She is survived by her loving nieces, nephews, nieces and nephews-in-law, grandnieces, grandnephew and extended family, all of whom were so devoted to her in life. Rest in peace.