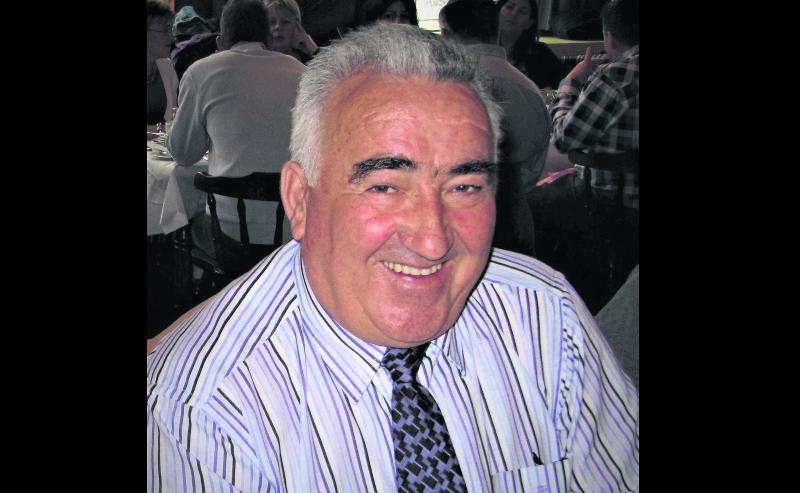 The late Patrick Fallon, Carrowmanagh, Longford, who died peacefully at his home following a short illness on Wednesday, April 29, 2020

Great sadness greeted the news of the death of Pat Fallon, a well known machinery contractor and farmer who passed away on Wednesday, April 29 after a short illness borne with great grace and dignity.

Pat Fallon was born in Lisreevagh, Lanesboro and along with his wife, Celine (nee Greene), also from Lanesboro, the couple farmed and made their home at Carrowmanagh on the outskirts of Longford town.

Pat was a warm hearted, gregarious man and his large physique and warm smile filled the biggest of rooms with affectionate and good humour.

Having grown up in rural Ireland, he was best placed to know the value of the traditional Irish funeral and had Pat passed in normal circumstances, they would have come from near and far to pay their respects to this enigmatic man.

As it was though, just family accompanied him to his funeral mass in his native Lanesboro and burial in Clonbonny cemetery. But all along the way, friends lined the roads in their own silent dignified tribute to a giant of our times.

All his life, Pat was a card carrying member of Fianna Fail and he basked in the delight of Joe Flaherty’s recent general election success. The new Longford TD was a friend of the family from childhood and spent many summers in Carrowmanagh and in the company of family delivered a heartfelt eulogy for his friend in Clonbonny cemetery.

Pat was a ferocious man to work and along with his wife, Celine, worked ceaselessly to build up their farm and his machinery business. This time of year would ordinarily see him selling plots of turf to neighbours and foes alike and so it was only fitting that ‘The Old Bog Road’ rang out around the cemetery as the man who was probably happiest said his goodbyes.

But much as he loved the land, his greatest triumph was his family. He and Celine delighted as Regina, Deirdre and Mark built their own lives and families. His death is a tough ask for Celine as they had many plans for their twilight years together. He travelled abroad unless to England to collect a machine or to assist his son, Mark, with his electrical business there. He was happiest in Carramana, and happier still surrounded by his beloved grandchildren.

He had a great relationship with his son, Mark, and they truly were best friends whilst he always beamed with pride at the merest mentions of daughters, Regina and Deirdre.

There was always certainty in Pat Fallon’s life. Just as sure as you knew he’d been cutting the turf this week, you’d surely find him in McPartland’s on a Sunday afternoon for the Clondra hostelry’s famed Sunday lunch. And afterwards he would surround himself with a trusted coterie of friends as they watched whatever the big match was that day and revelled in each other’s company.

Pat was a religious man and always tried to attend Sunday mass back in his native Lanesboro and so it was fitting that it was local parish priest, Fr Mickey Reilly, who celebrated his funeral mass. Both men are of the same era, both are men of the land and Pat always delighted in the simplicity of Fr Reilly’s homilies and the references to local history and folklore.

Pat Fallon was a great man to drive to a digger; drain a farm; cut a bank of turf or pull a calf.

But most of all he was an outstanding husband and an exceptional father. He was loyal to a fault and never let down a neighbour in distress.

There’s a deep sadness in the close knit Fallon household at his passing but it’s a sadness deeply felt and shared by many, many people the length and breath of Ireland.

A memorial mass in celebrations of Pat’s life will take place at a later date. The family are extremely grateful for your support at this sad time.