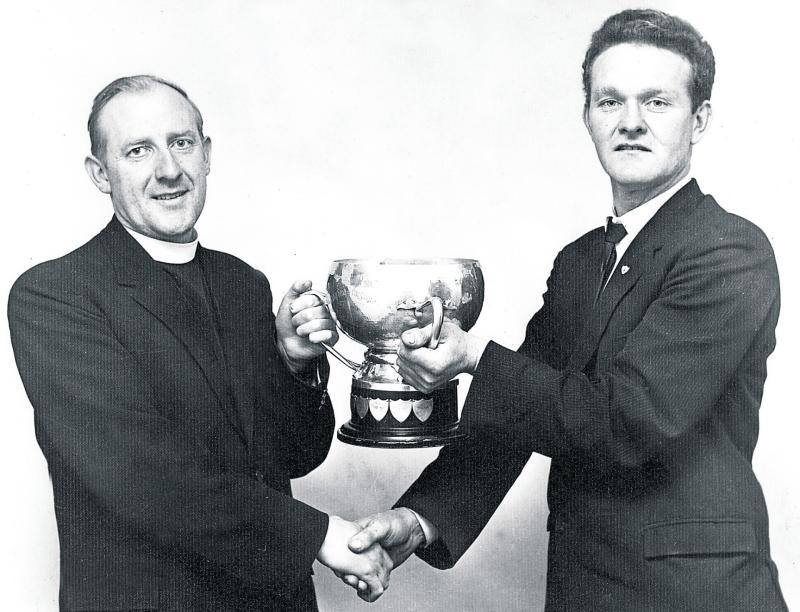 Bishop Emeritus Colm O'Reilly, who served as a priest in Granard during the 1960's, and Martin Clyne pictured with the Connolly Cup in 1967

Granard, Newtowncashel and Longford is in mourning this week following the death of Martin Clyne, who was described as ‘a true decent man’ by Fr Simon Cadam during his homily to the Funeral Mass on Saturday morning in St Mary’s Church, Granard.

Martin passed to his eternal reward, peacefully, last Wednesday, December 4, at Mullingar Regional Hospital and Fr Cadam highlighted how the deceased possessed a great sense of the soil under his feet and made a deep impression on the community of Granard.

An exceptional gaelic footballer, Martin captained his native Cashel to the Longford junior championship title in 1961, defeating Sean Connolly’s by 0-7 to 0-3 in the final.

Shortly after this triumph, Martin moved to Granard and in the Cashel GAA Club history publication, Martin wrote himself:

“I was delighted to be the captain of the team in 1961 and the joy of that great victory. It was also the year I left this parish, Newtowncashel.

“I was sorry to leave the club then as the spirit was high at that time but I had a new life to live and new friends to make.”

Cashel’s loss was St Mary’s and Granard’s gain as Martin made a huge contribution to GAA and community life in the north Longford town.

Renowned as ‘a hardy defender’, Martin was an outstanding performer with St Mary’s Granard during their glory days of the 60s.

“To mark some of the players he marked out of the games during that time, you had to be a great player,” proclaimed a tribute to Martin on the St Mary’s GAA Facebook page.

Martin played in a Leader Cup Final with Granard in 1963, losing out to Longford Slashers before he won his first Leader Cup medal in ’64.

He settled so well into Granard that in 1967 he was voted as the club’s senior captain and he skippered them to the Longford senior football title and Connolly Cup that year. In the final, St Mary’s had four points to spare over Carrickedmond, 1-7 to 0-6.

That was Martin’s second Longford senior football championship medal as the previous year, Granard were 0-9 to 0-2 winners over Éire Óg in the county final.

He won a third SFC medal in 1970, the tenth of Granard’s eleven county championship successes, which was achieved at the expense of Clonguish in the final, 0-10 to 0-7.

A winner of Leader Cup medals in 1964, ‘66 and ‘69, Martin also won numerous other league and tournament medals with Granard.

There were occasions when he came up against his native Cashel, and lined out against his cousin Johnny Clyne, and as Fr Cadam reminded the congregation, “whatever the outcome they always walked off the field as friends. Martin always had a great sense of community.”

While still playing senior and later on in his career, junior football, with St Mary’s, Martin dedicated himself to training Granard club underage teams.

Indeed, Martin trained schoolboy and U14 teams for a few years and later played with most of those younger lads on Special Junior League teams when they were moving up to adult football.

He was a great influence on numerous Granard players over the years and they will never forget him.
A Vice-President of St Mary’s Club for a number of years, he is among the greats to have worn the famed Granard jersey and he is a true St Mary’s legend.

His coaching prowess was not only confined to St Mary’s and in 1996, Martin trained the Mullinalaghta St Columba’s side that captured the Longford junior championship title, defeating Shroid Slashers by 1-10 to 1-8 in the final.

He also had stints as team trainer with the Ballymore and Forgney St Munis clubs.

Welcoming Martin’s brother Tom, and his nieces Lisa, Jane and Ellen to the Funeral Mass, Fr Cadam spoke of the other organisations that Martin was deeply involved with.

He was on the first committee of Granard Community Centre, served as chairman of that committee and was working on a planned restoration of the centre.

He ran a whist drive for many years, loved to play the game and travelled near and far to play it.

He also assisted the late Anne Byrne, Longford’s oldest citizen who recently passed away in her 105th year, organise an annual whist game in aid of Muscular Dystrophy Ireland.

Through his involvement with Macra na Feirme, Martin enjoyed producing and putting on plays in Granard.

Many will have very fond memories of him playing Professor Tim in that great play of the same name and for a man who was a non drinker he could play the drunken Tim with excellence.

Fr Cadam said Martin was ‘a great farmer’, adding, “Martin loved his land and his cattle and he had a great pride in his work and a great sense of the soil under his feet.”

He took great pride in having prize winning cattle and with his very loyal friends and neighbours The Poyntz family he travelled to many shows and indeed he also judged at many shows.

A table tennis player of note, Martin was highly regarded by all who knew him and as a mark of respect, the St Mary’s Granard Minor AGM scheduled for last week was postponed.

Following Funeral Mass on Saturday, the late Martin Clyne was laid to rest in Granardkill cemetery.