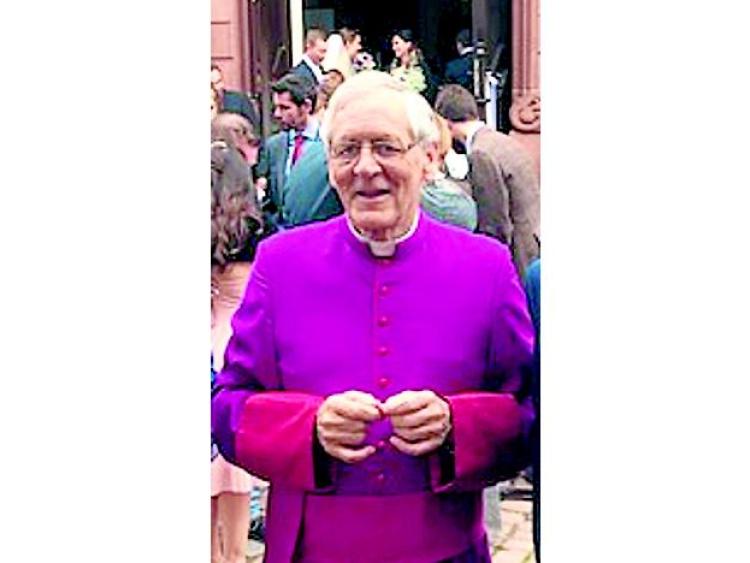 Granard native, Monsignor Canon Bartholomew Nannery, the Dean of Plymouth’s Catholic Cathedral of St Mary and St Boniface, celebrated the golden jubilee of his priesthood at a special concelebrated Mass on June 16.

It was fifty years to the day since he was ordained a priest at All Hallows in Dublin in 1968.

Many of Monsignor ‘Bart’s family still live in Granard.

Mgr Nannery has served the cathedral and its parishioners faithfully for the last 28 years.

He was appointed Administrator in 1990 and has been instrumental in overseeing many changes and improvements to the building and its surroundings. His pastoral care of the people has been exemplary.

The Rt Rev Mark O’Toole is the bishop of the Diocese of Plymouth which covers the South-west of England.

He paid tribute to Monsignor Bart: “I want to express my thanks to him for the outstanding service and commitment that he has shown, both in the cathedral and in the parish, over the many years. Many have cause to be grateful for his generosity, warm welcome and faithful dedication.”

Plymouth Cathedral was packed for the Jubilee Mass.

Among the 700 guests and parishioners was the new Lord Mayor of Plymouth, Councillor Sam Davey. He presented Bart with an illustrated scroll bearing the armorial crest of the Corporation of Plymouth which expressed their gratitude for all the monsignor had done for the city over the years.

It was accompanied by a personal gift of a beautiful Dartington Crystal carafe, engraved with the city’s crest. At the end of Mass, Monsignor Nannery expressed his ‘deepest gratitude and affection’ to all as well as thanking those who had put
together such a wonderful ceremony with lovely music from the choir led by the cathedral’s director of music, Christopher Fletcher.

After the 11am Mass, all the guests were invited to lunch in a huge marquee in the bishop’s garden.

There was a hog roast and a wide variety of dishes served by all the different ethnic communities who make up the cathedral’s diverse congregation.

Monsignor Nannery was interviewed on BBC TV News and the next day on BBC Radio Devon, saying how fortunate he was to have come to work as a priest in Devon immediately after his ordination: “I believe that our English Catholic parish structure is probably the best in the world,” he said.

“In some Catholic countries, parishes can be too big but here they are small enough for us to have a close and intimate relationship with all the people and their families.”

Bart’s P.A. is Kasia Misztowt who was also interviewed by the BBC for last Sunday’s religious programme. “He cares about this place a lot:” she told the listeners, “it’s his life. He loves the people here and he’s loved and cherished by them in return.”

Monsignor Bart is one of five priests in the Diocese of Plymouth who are celebrating their golden jubilee this year. They include one of the most senior clergymen, Monsignor Harry Doyle, who actually went to the same Irish boarding school as Bart – St Patrick’s College in Cavan. In fact, the present Bishop of Kilmore, the Rt. Rev. Leo O’Reilly was one of their classmates!

“I’m very glad that I chose the Diocese of Plymouth in which to minister as a priest,” said Monsignor Doyle. “I have been very happy in each of the parishes I have served. My thanks go especially to my parents as well as all my family and friends at home in Ireland who encouraged me to become a priest.”