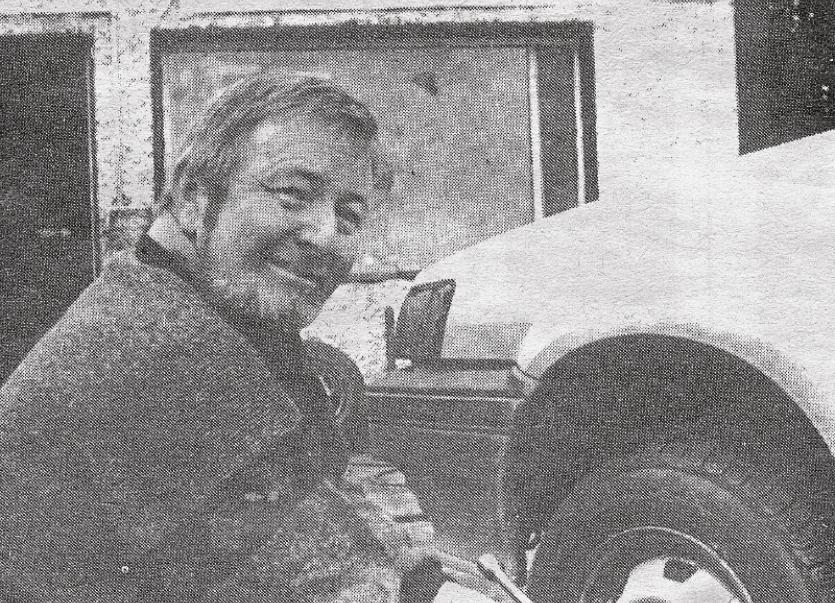 It was the end of an era in Longford town recently with the sad passing of Jimmy Mulligan, who for many years ran the successful Longford Tyre Services, first in Teffia Park and later in Townspark Industrial Estate.

An extremely hardworking man, Jimmy was known the length and breadth of the county as he was routinely called upon to carry out repairs on all types of tractors and machinery on farms and building sites.

Everything he did, he did with his own unique sense of humour and a commitment to getting the job done regardless of the weather or the hour.

Work was a huge part of Jimmy Mulligan’s life  but without doubt his greatest passion and pride and joy was his family – his wife, Yvonne; son James; daughter, Kerry and his beloved grandchildren, Scarlett and Christian.

He was a wonderfully loving and devoted companion and husband to Yvonne and his unquestionable love for their two children was so eloquently recalled by his daughter,  Kerry,  in a moving eulogy at his Funeral Mass.

He instilled in Kerry and her brother a curiosity for the world around them.

He always had his trusted binoculars at the ready to check on the stars and this sense of adventure saw him indulge in a number of hobbies over the years.

He loved Pitch & Putt, spent a number of years diving and was a committed gardener.

But two of the great constants in his life would have been country music and cruising on his beloved Shannon.

At home he was affectionately known as St Francis of Assisi for his love of animals and especially his trio of dogs, Rocky, Friday and Jackie.

Seemingly there wasn’t an animal in the country who didn’t get a trademark ‘Jimmy Mulligan Polo mint’ at some stage.

There was plenty of sadness in the late Jimmy Mulligan’s life.

His only brother died while still a toddler, and then his father passed away when Jimmy was seven years old.

The family had been living in Esker but soon after his father’s death, Jimmy and his mother, moved to a new house in Schooland, Ballinalee.

He remained exceptionally close to his mother and was a devoted and loving son.

There was an element of a Hollywood love story about Jimmy and Yvonne’s courtship.

She was just 13 when she and her family came over from the UK to holiday in Ballinalee. Jimmy was then 19 but immediately he knew there was something special about the young lassie from England.

Yvonne returned again when she was 16 and it was then that the first embers of a romance between the young couple began to spark.

Soon after Jimmy went to work in Manchester but thankfully he was back home again when a now vivacious 19 year old year, Yvonne Andrews, returned once more to Ballinalee.

The romance developed at pace then and soon after they left for a new life together in England.

They married in Hammersmith, London in 1971.

Soon after they returned to set up their family home in Longford and Jimmy worked first with Liam Fenelon and then for Peter Quinn in the new Midland Warehouse supermarket on Main St, before joining the More Miles tyre business.

Eventually he decided that he would try to make a go of the tyre business himself and over thirty years he built up a business that he was rightly, exceptionally proud of.

It endured and succeeded because of his commitment to the customer and this was reflected in the many who turned out in such large numbers to pay their final respects.

The business still trades today and it would have been a huge source of pride for Jimmy as the Longford Tyre Services  emergency call out van led his hearse on the final journey to Ballymacormack cemetery.

He was a very talented man and really could have turned his hand to anything.

He took a delight and pride in building the family home in the Demense, Longford town,  and there was nothing that he couldn’t fix around the house.

The late Jimmy Mulligan fought a long and hard battle with illness.

He was determined to spend as long as possible with his beloved family.

It was a battle that saw him use up every ounce of energy and he fought with the poise and dignity that epitomised his life.

For his family, Jimmy was much more than a husband, father and grandfather; he was an inspiration and his passing leaves many happy memories, but also a huge void in all their lives.

His remains were brought from the family home to St Mel’s Cathedral for Funeral Mass and burial afterwards was in Ballymacormack Cemetery.