Plenty to do and see this Christmas in Ballinalee 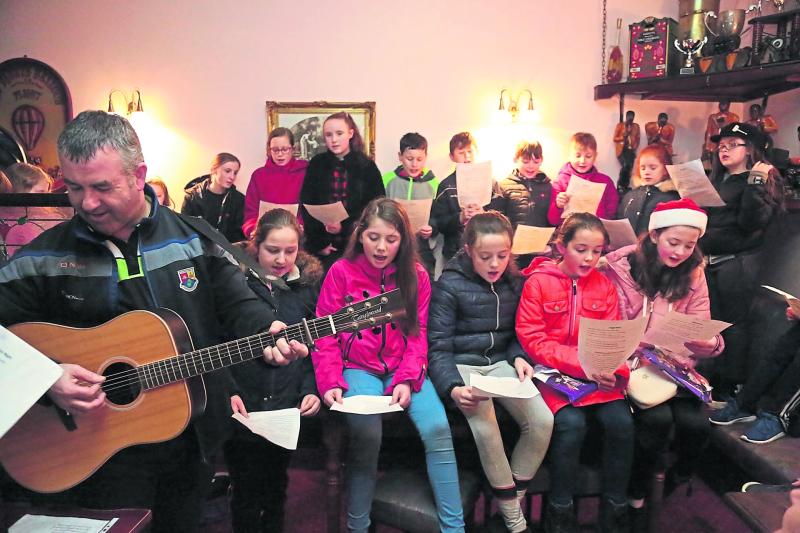 Choir performs Christmas songs in the Stag's Head after the Ballinalee Christmas lights were officially turned on Pic: Shelley Corcoran

Despite what was a wet and cold evening in Ballinalee, a large crowd gathered in the village for the official turning on of the Christmas lights.

The ‘light up’ ceremony, which took place on Saturday, December 7, was carried out by Ballinalee native and Cathaoirleach of Longford county council, Micheál Carrigy. Prayers were then led by Fr Murray.

On the back of what was a successful start to the Christmas season in Ballinalee, the hard work and dedication of the committee involved was praised all round. All lights were erected and wired by Colm Nugen and Colm Fox.

Once the lights were turned on, crowds then made their way to popular hotspot Stag’s Head, where the community joined forces to sing Christmas songs.
A raffle was then held with a number of fabulous prizes on offer, and a final total of €6,500 raised in the process.

It was a great night all round in Ballinalee, with the countdown now on until the big day. T minus one week (as of Wednesday December 18).

Also read: Plenty in store and much to savour in Arva following red letter 2019

The Christmas cheer will be evident in the village of Ballinalee in north Longford again this week, as students of Ballinalee national school prepare to host their eagerly anticipated Christmas concert.

Always a well attended event in the area and on the back of last year’s extremely popular concert ‘to remember’, this year will see the school host their special festive concert over the course of two nights - Wednesday, December 18, and Thursday, December 19.

The concert is open for all to attend, however, to avoid the disappointment of potentially missing out on a place, you can book tickets by contacting the school on 043-3323333.

Although the first show of the annual concert kicks off tonight, December 18, organisers are still seeking donations for the raffle. Anybody who would like to donate a prize can drop them directly into the school in Ballinalee.

“Last year’s concert was one to remember and this year’s instalment is expected to be bigger and better again.”

Just incase you thought the list of events taking place in Ballinalee over the Christmas period ran dry, also scheduled to take place in the coming weeks is the Senior Citizen’s Christmas party.

The annual party will take place on Sunday, January 20. Tickets are available for purchase from Carmel Reynolds. A raffle will also take place on the night, with a large hamper up for grabs. The hamper has been kindly sponsored by Brian and Mary Gorman.

While you are here: Foster & Allen bringing their Timeless Memories Tour to the Rustic Inn