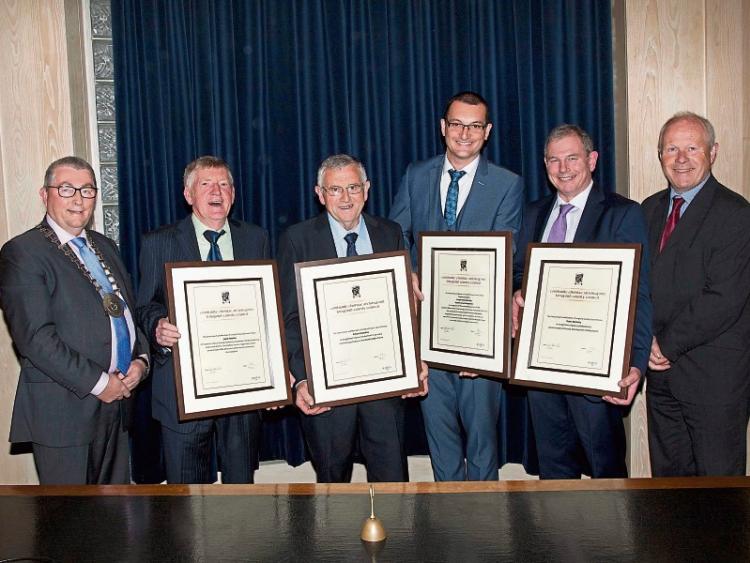 Admiration and reverence were in rich supply last week as four community stalwarts were recognised for their contribution to local volunteerism.

The quartet were honoured at a special Cathaoirleach awards ceremony at Longford County Council’s headquarters.

They were nominated by the county’s three Municipal District’s cathaoirligh with a fourth being nominated for the wider county by County Cathaoirleach Cllr Mick Cahill.

Addressing those in attendance, Cllr Cahill said the event was a chance for the efforts of those who contribute to the lifeblood of community life up and down the county to be acknowledged.

“Too seldom as a community,  do we take the time to formally show our appreciation for the enormous work of our dedicated community  volunteers, those people who give so generously of their time, energy and expertise for the common good,” he said.

“These are the true ‘unsung heroes’ in our society who discreetly go about their business without any expectation of acknowledgement or reward.”

Making reference to the countywide award which, he said, recognised the contribution made by an individual to local business and the development of the county as a whole, Cllr Cahill said the evening was more than simply dishing out fancy accolades.

“This Awards Ceremony is Longford County Council’s opportunity to show our gratitude.   In bestowing this honour to our award winners, we also recognise and applaud the trojan work delivered by countless other individuals and Groups all over County Longford .

“To our award winners I would say, you are a great resource to your own communities, but also an inspirational presence for the wider public, who recognise and applaud the gift your work has bestowed on our society.”

Though a Cavan native, Cllr Cahill said Mr Hawkins had spent the best part of half a century living and working in Colmcille parish.

The father of four, he said has been the mainstay behind umpteen organisations down through the years, namely the  parish council, Colmcille Youth Band, Community Alert and the Vintage Tractor Club, to name just a few.

Other involvements, he added, include his work as an active church steward, his membership of the Colmcille branch of The Friends of St Christopher’s as well as a whole host of other local fundraising initiatives.

Perhaps his most noted involvement for the last fifteen years, onlookers were told, has been Mr Hawkins’ key association in the development of Lebeen Park in Colmcille, acting as an unpaid project manager. Those efforts, combined with his numerous other community led roles, made him a fitting recipient of a Cathaoirleach award.

If the Hawkins name was synonymous with Colmcille, the same could also be said of this year’s Longford Municipal District award winner.

Liam Fenelon, revealed Cllr Cahill, hailed from a family of five having spent much of his formative years in Esker, Killoe.

“From the start his parents, Mick and Rose, instilled a strong work ethic in all of their children that encouraged them all to succeed in their own rights,” he said.

It was indeed there where the avid marathon runner met and married his future wife, Mary.

A proud father to his three girls, Sharon, Fiona and Michelle, paid testimony to Mr Fenelon’s deep devotion to family life, a trait which would ultimately stand him in good stead when turning his attentions to more charitable efforts.

Having acquired a penchant for marathon running, Cllr Cahill said that fascination would soon compel the proud Longford man to combine his love of the open air to that of local philanthropy.

“Your first fundraising was for a well for the 'White Fathers of Africa' followed by fundraising for Our Lady's Hospital for Sick Children Crumlin, Temple Street Childrens Hospital, Guide Dogs for the Blind, Cerebral Palsy, Cystic Fibrosis, Stonepark Tops of the Town, Leitrim Animal Welfare, St. Christopher's services Longford, the Niall Mellon Township Trust and many many more,” he said.

“It has been estimated that Liam has raised many hundreds of thousands for these very deserving causes over the years.”

But it was arguably his deep seated involvement in the fledgling emergence and continued success of the Longford Marathon for which Mr Fenelon was perhaps best known.

Widely reputed as being one of the most well attended and eagerly awaited annual socials as well as sporting occasions, Cllr Cahill said the marathon had gone a long way in promoting Longford as an international destination while also raising valuable monies for St Christopher’s.

Modest and unassuming by his very nature, it perhaps came as little surprise that Mr Fenelon himself contacted the Leader on Monday to insist his voluntary and fundraising efforts would not have been possible but for a courteous general public as well as the backing and assistance he had received from family, friends and supporters over the years.

For Ballymahon Municipal District’s six elected members, their chosen nominee this year was that of Peter Dennehy.

Having served as Chairman of Ballymahon Traders Association since the autumn of 2014, Cllr Cahill said the local businessman regarded the highlight of his term so far as the official Center Parcs announcement by then Taoiseach, Enda Kenny in April 2015.

“Your first involvement in the community and voluntary sector goes back to 2002 when you became involved with the Midland Motor Club,” said Cllr Cahill.

The evening was rounded off by Cllr Cahill himself as he conducted one of his last acts in office by handing the County Cathaoirleach award to Ciaran Corcoran, Site Director with Abbott Ireland, Longford.

A global company with a deep and close affinity to Longford, Cllr Cahill said the firm’s reputation for excellence was illustrated two years ago when its Longford plant secured the highly prestigious shingo award - an internationally recognised award for operational excellence.

“That award helped the Longford plant win further contracts within the Abbott group that has resulted in its current expansion, a development that will see the workforce grow towards 500 over the coming period to include up to 50 employees with PhD qualifications,” said Cllr Cahill.

As for Mr Corcoran’s own involvement, the Colehill public representative said there was much to extol about.

“Ciaran has helped to set Abbott Longford on a path of continuous improvement and growth.

“This in turn has consolidated Abbott's presence in Longford and its roots are now firmly embedded in our community.  “Ciaran, himself, is a champion for our cause, supporting the different agencies involved in this area and championing Longford and the midlands in general.”

As midlands regional president of IBEC, few could call into question the healthcare senior professional’s diligence and application when it came to promoting the various benefits that Longford as location and local economy have to offer.

As such, it was certainly apt, he said, that Mr Corcoran was the outstanding candidate to receive this year’s County Cathaoirleach Award.