PUNCHESTOWN TIPS: The best bets for Day 1 of Punchestown 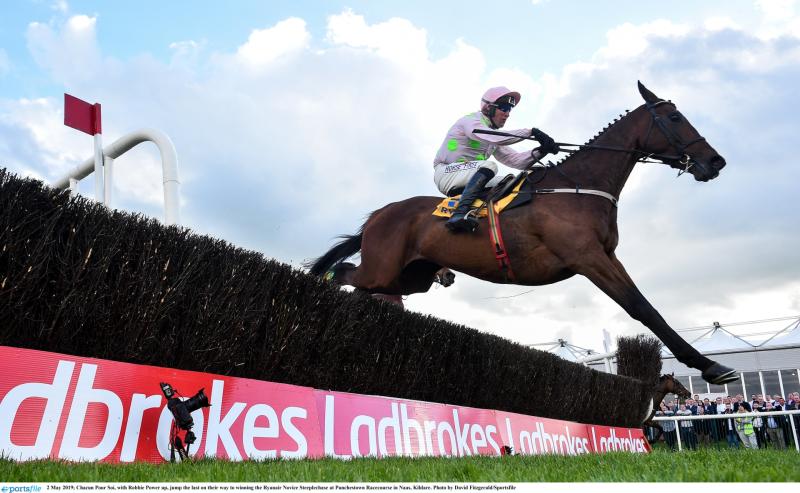 Chacun Pour Soi in action at Punchestown in 2019 PIC: Sportsfile

A tricky opener to dissect but I like the trajectory of SCHOLASTIC (9/1) for Joseph O'Brien. He was eight lengths down on Cheltenham Boodles winner Jeff Kidder when they met in Fairyhouse at Easter, finishing ahead of stablemate Busselton. A couple of weeks ago, he travelled to Cheltenham and finished second to Her Indoors having met with some trouble in-running and been short of room when the race was developing two out. He also has good course form having beaten Jeff Kidder here last September. He was also second behind subsequent Triumph Hurdle winner a month later on the same track on similar ground. That will do for me.

Echoes In Rain made a serious impression when beating MC Muldoon by 15 lengths at Fairyhouse at Easter and her win over Belfast Banter back in February could not have worked out better with the latter winning at both Cheltenham and Aintree in subsequent starts. She will get a mare's allowance here too but I'm still opposing her with BLUE LORD (6/4). He was second behind Bob Olinger at Naas in January and third behind Appreciate It at Leopardstown in February. Both of those rivals won at Cheltenham (Bob Olinger in the Ballymore and Appreciate It in the Supreme). Blue Lord was in that Supreme with Appreciate It and was running a blinder before coming down at the last when in second place. He would not have been beaten for that silver medal spot had he stayed on his feet. He can correct the record today.

Another puzzle to work out with plenty of interesting ones. Jumping out to me are Whiskey Sour (off the track almost two years) and Jazzaway (beaten by just half a length by Cheltenham winner Mrs Milner in Galway last year) but I'm going with the eachway claims of CHAMPAGNE GOLD (14/1) for Henry de Bromhead and Rachael Blackmore. He was well beaten behind Belfast Banter in the County Hurdle at Cheltenham but he ran a nice race at Leopardstown before that when he was just a length behind winner Drop The Anchor (7th in the County Hurdle). It is far too early to give up on Champagne Gold yet and I think this race might work out a little better for him. He could certainly run into a place at a nice price.

This is an intriguing race this year with Willie Mullins pitting two of his stars against one another. Allaho was a mighty winner of the Ryanair at Cheltenham while CHACUN POUR SOI (6/4) fell flat and finished second in the Queen Mother Champion Chase behind Put The Kettle On. However, I think Chacun Pour Soi can get back to winning ways. It's interesting to see two British raiders here (Nube Negra and First Flow) because they obviously think they can beat this Willie Mullins pair. I'm not so sure, despite the fact Nube Negra was a close third behind Chacun Pour Soi and Put The Kettle On in that Champion Chase. Mullins has admitted that the two-mile trip is an experiment for Allaho who won over further in scintillating fashion at Cheltenham. He jumps quick and should like it but Chacun Pour Soi has the best form at two miles and we can forgive him his poor showing at Chelteham. He also has winning form at Punchestown so he ticks a lot of boxes.

This is a proper match between two future stars of the sport who both took a dent to their reputations at Cheltenham. Envoi Allen vs Monkfish. While MONKFISH (6/5) won at Cheltenham, he put in more than a few sticky jumps and gave favourite backers plenty to worry about late on. Envoi Allen was billed as the banker of the meeting by many at Cheltenham but it was all over before it started in the Marsh Novices Chase as he fell at just the fourth fence. Monkfish has the perfect record over fences given the fact he run four and won four. Despite his mistakes at Cheltenham, none of the others could lay a glove on him and he still won by six lengths. I think this could be a race for the ages but I'm siding with Monkfish.

Enda Bolger will probably win this and has the top two in the market but it's always one for an eachway bet for me and neither of Enda's our an eachway price. FESTIVAL OPERA (40/1) has pieces of credible form in the book but that form is patchy at best. He hasn't won a national hunt race in his career yet but has picked up some point-to-point victories. His win over Venitien De Mai at Lingstown in March 2019 isn't bad form and looking more recently, his fourth-placed run behind Stand Up And Fight (beaten 22 lengths) isn't too bad. He was pulled up after going well enough for a long way in the cross country at this track in February. It will have to be a great day for him to win but at the prices, he's worth an eachway shot. Today could be the day.