Roving Leader: Longford student ‘Damola was much more than your average teenager’ 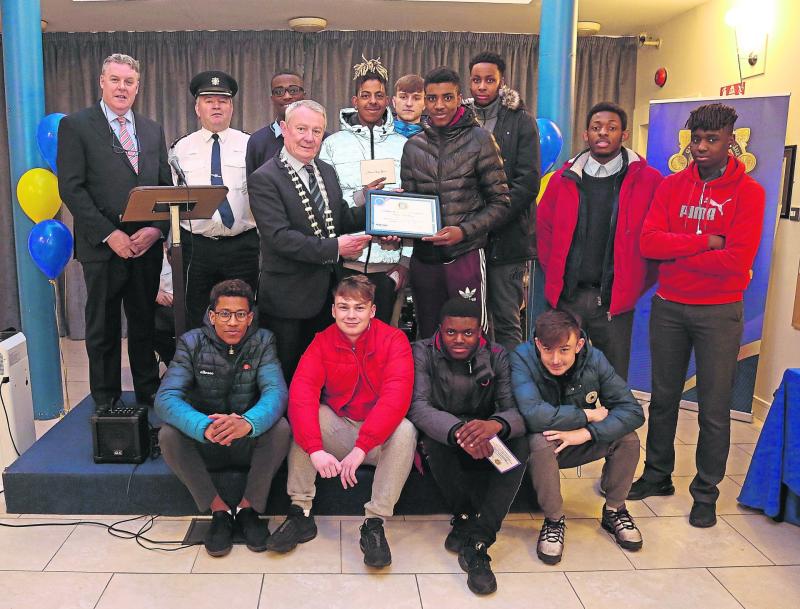 The Damola Boys, pictured above with Chief Supt Tony Healy, Cllr Seamus Butler and Ciaran Mullooly. The group, which was set up in Damola's honour, won the Special Recognition award

Devastating, heartbreaking, tragic, three words which only touch upon the impact the accidental death of Longford teenager Damola Adetosoye had on not only his family and closest friends, but also the wider community.

It was just over two years ago when news surfaced of the unfortunate circumstances in which 17-year-old Damola lost his life.

The keen sporting enthusiast was swimming with friends in the River Shannon near Tarmonbarry on the Longford-Roscommon border in July 2017, when he got into difficulty.

His death not only resulted in devastation for his mother Helen, brothers, sisters and closest friends, but people far and wide throughout the country.

He is one teenager who will never be forgotten and to those closest to him, he was much more than just the average teen.

Eric Ehigie, one of Damola’s closest friends, told the Leader: “Damola Adetosoye was much more than your average teenager.

“There was something about Damola that distinguished him from any other young person that I have ever encountered.

“He had the basic qualities that you would expect from an ideal friend. He was loving, caring, kind, incredibly humorous and empathetic but there was something different about him.

“He is one of few people that I have seen, that can connect with all people, regardless of their age, background or creed, on many different levels. This is why he was, is, and will forever be regarded so highly across the societal spectrum in Longford,” Eric continued.

Damola was not only a kind-hearted friend, but was always more than happy to lend an ear to those in need, such was his nature.

“The first thing I noticed about Damola was his smile,” his friend Gospel Idahor said to the Leader.

“I didn’t even know him well at the time but he instantly greeted me with the warmest smiles, which is something I can never forget.”

Adding, Eric Ehigie said: “Personally, he was a big brother to me.

“He was so ahead of his time that whenever I felt like I needed to speak to someone about issues regarding academia, sport, typical juvenile issues, or anything at all, he was the man that I would talk to.”

Described as a genuine man, who believed in the power of spreading love and positivity, Damola was also as passionate about sport, as he was about helping others. He played for both Clonguish GAA club and Camlin United FC during his time.

“Damola‘s work ethic shone through in everything he did, particularly with academia and sport,” Eric Ehigie told Kevin Forde of the Longford Leader.

“I cannot remember him telling me about a grade he had received that was lower than a 'B', and the same thing applied on the football pitch also.

“Whether he was the most talented player on the field on a particular day, or not, he would undoubtedly give you his all.

“I guess what made him so relatable was the fact that he was perfectly imperfect.”

Although gone from our lives for two years, Damola’s memory is sure to live on and his death not in vain, which was proven as his friends were awarded the Special Recognition award at the Longford/Roscommon Garda youth awards in March of this year.

Damola’s passing led to the formation Damola/Attic Boys Group, which his friends created to try and create awareness surrounding the need for greater water safety measures.

The team developed a group focusing on water safety practices and subsequently established an eight-week course to help get their message across.

MC for the awards, Ciaran Mullooly said upon presenting the group with their award: “Following the death by drowning of their friend and fellow House member in 2017, the Attic Boys group was established to help young people deal with the bereavement caused by drowning.

“It then developed into a group that brought water safety to their peers and ethnic minorities, by establishing and implementing an eight-week long water safety course and swimming lessons.

“In doing so, the Attic Boys group have brought a greater awareness and level of water safety to young people throughout Longford.”

Gone but never forgotten, Damola’s legacy will live on forever.

“His legacy is present in every human that he touched,” Eric Ehigie remarked.

“He is in all of our hearts and he pushes us on to do our very best every day, as he did when he was here.

“I have heard stories from people about how Damola has helped them with their mental health, given them life changing advice and shown them love when they felt like they were undeserving of it.

“For this reason, and many more, his long lasting memory will never die and will remain in us,” he concluded.