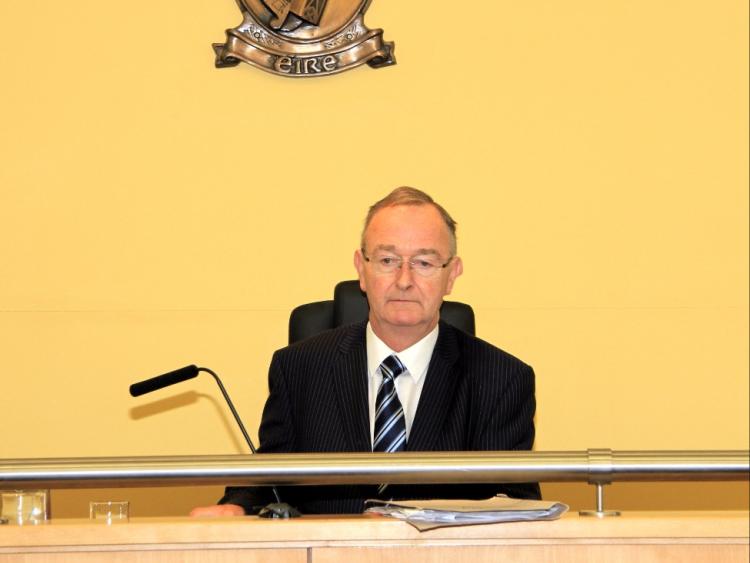 The victim of a criminal damage episode in south Longford has said he would have used a pitchfork in retaliation against the perpetrators had he managed to catch up with them.

John Mannion made the admission after seeing a window of his house in Legan being smashed by the former partner of one of his daughters.

Mr Mannion said he was at home watching an episode of Winning Streak on the evening of the incident when he was disturbed by “a racket” brought about by the sound of breaking glass.

As he went to investigate, Mr Mannion said he noticed the window had been broken just as a jeep suddenly took off at speed.

In the midst of the unfolding situation, Mr Mannion and his 21-year-old daughter Emma gave chase in their own vehicle.

After a brief pursuit, the pair managed to catch up with the jeep after it broke down near Ballynacargy.

As there appeared to be no attempt made by either the driver or passenger to exit the jeep, Mr Mannion said he decided to approach the vehicle while turning his own headlights on full beam.

He said after identifying the driver, he also observed Mr Languish sitting in the front passenger seat before telling him: “I have you now Dylan”.

“The two got out of the jeep and I said to Emma: ‘Get the fork out of the van.’

Mr Mannion said at that stage the pair made a sudden dart past his daughter and made their escape by jumping a gate and into an adjoining field.

Asked by Judge Seamus Hughes what he would have done with the implement if given the opportunity, Mr Mannion replied: “I would have used it, would you not use it?”

Mr Mannion, though, was eager to stress he would have stopped short of inflicting serious harm on Mr Languish, saying: “I would have given him the handle across the forehead. I wouldn’t have killed him because I’d be gone (to prison) then.”

He also told of how he had to personally fork out over €100 to fix the window, despite revealing he was a local authority housing tenant.

Defence solicitor Brid Mimnagh, in her cross examination of Mr Mannion, suggested there was more to the case than just the accusation of her client breaking a window.

She said there was “bad blood” between both parties and suggested Mr Mannion’s insistence on taking the matter further had resulted in the case reaching court.

“Dylan tried to run me off the road,” responded an aggrieved sounding Mr Mannion.

“He can’t leave us alone, he is down in Legan the whole time.

“I used to get on fierce well with Dylan.”

The inference Mr Languish’s parting of the ways with another of Mr Mannion’s daughters might have fuelled ill feeling between the pair was also put to him.

“The thing is, every time he meets you, you are making complaints about him,” Ms Mimnagh put it to Mr Mannion.

Evidence was also heard by two of Mr Mannion’s daughters, both of whom were at the scene on the night.

One of them included Emma Mannion, who travelled with her father in pursuit of the jeep which had been seen speeding off from the area.

She also told the court of being able to positively identify Mr Languish as one of the two occupants found sitting in the jeep when she and her father caught up with them.

Sgt Beatty said he arrested Mr Languish at 10pm that evening after a search of the area had been conducted for the two people seen abandoning the jeep in the roadway.

He said during questioning Mr Languish admitted being in the jeep which had been stolen in Mullingar sometime previously but denied any involvement in breaking the window of the Mannions’ house.

Mr Languish, for his part, said he had been out drinking in a pub when another man came in and asked him for “a spin”.

The father of two said the man told him the jeep was stolen, causing him to exit the vehicle and return home.

Judge Seamus Hughes, presiding, said he simply did not believe Mr Languish’s version of events, preferring instead to rely on the sworn testimonies of Mr Mannion and his two daughters.

In mitigation, Ms Mimnagh said her client was a father to two children and came to court with a previously unblemished record.

With that Mr Mannion could be seen exiting the courtroom before shouting up at the bench: “Good man your Honour, thanks.”

As it later transpired, Mr Languish returned after lunch with the required €1,000.

Judge Hughes consequently set aside €120 of that total for compensation to Mr Mannion with the remaining €880 handed into court as a fine payable forthwith.