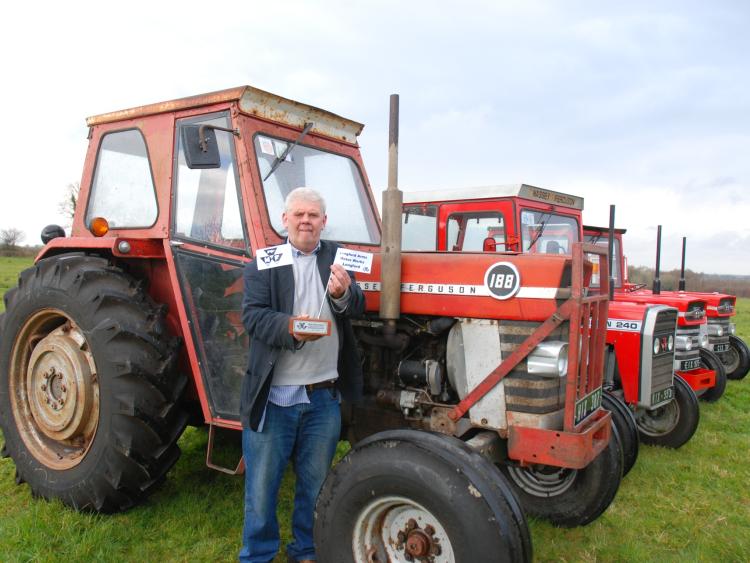 Andy Clancy’s unique display of vintage Massey Ferguson tractors will be one of the star attractions at this year’s Streete Vintage Show.

Andy Clancy’s unique display of vintage Massey Ferguson tractors will be one of the star attractions at this year’s Streete Vintage Show which is being held on Sunday, July 9.

This will be the tractor's last outing as a family as their owner Andy Clancy has decided to call it a day and is retiring from the vintage scene.

Andy says he has enjoyed every moment of buying them and restoring them back to good health and points out that it has surely been a labour of love for the Massey Ferguson tractor range.

“I just haven’t got the time anymore,” he explained, adding “it’s a shame to see them lying up in a shed not being used.”

Andy has always been a keen vintage fan but the bug really got hold of him back in 2002 when he got talking to Kevin Brady from Streete who was organising a vintage show.

From then on, he says “I couldn’t resist getting stuck in and doing up my first tractor which led on to me buying another and many more followed from there. I bought and sold a good few over the years until I finally ended up with these thirteen cherished tractors all in pristine condition and starting on the first swing.”

One of Andy’s much loved tractors is a Massey 188 he bought with his father in 1977 from the Longford Arms Motor Works, a once famous garage in Longford town owned by the McCumiskey family which is now a landmark site and forms part of the well-known Longford Arms Hotel on Richmond Street.

The Longford Arms Motor Works was a big Massey Ferguson dealer which supplies a large proportion of tractors in Longford county and in parts of adjoining counties Westmeath, Leitrim and Roscommon.
“When we bought the 188 tractor it was immediately pressed into contracting work, cutting grass by night and bailing during the day, as well as doing my own farm work.”

Andy smiles as he remembers the day well-known Massey man and now owner of OTP, Matt Buckley, along with Donal Drake, then a salesman from Longford Arms Motor Works, spending a full day in his home at the kitchen table trying to seal the deal for the new tractor – “that's the way it was done in those days.”

Andy remarked, “I’m a huge fan of Streete Vintage Show and I’d say it’s one of the best in the country. I’m delighted to be asked to bring my collection to Streete for their last run before they head off to Paul Cook’s auction house in Naas on July 15.”

Andy admits it is with a heavy heart he has made his decision to sell them. “These thirteen tractors have been great friends of mine and whoever buys them will not be disappointed.”

Andy Clancy’s tractors will be part of the Philip Moran Memorial run on Saturday, July 8 at Streete Parish Park and will be on display at Streete Vintage Show this Sunday.