TERRIFYING! You don't expect to bring THIS home with you when you do the shopping! 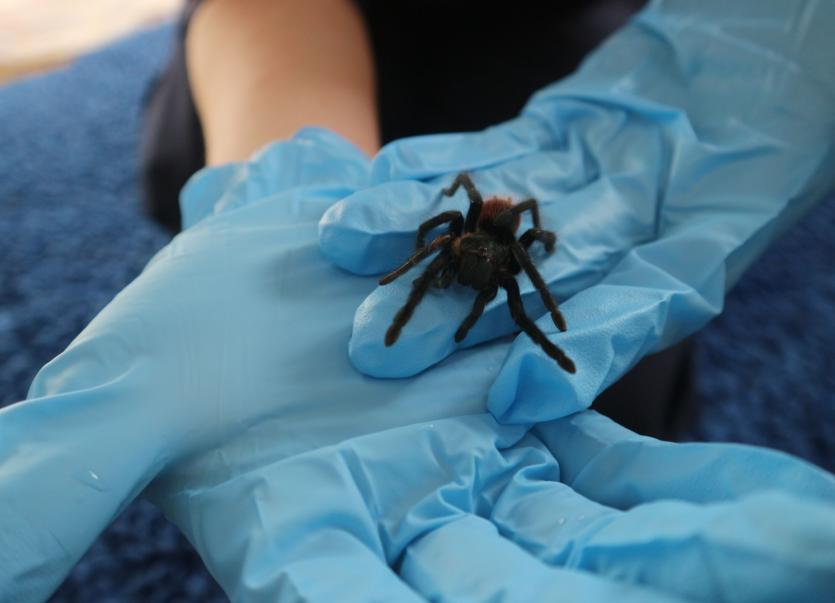 TERRIFYING! This is not what you expect when you buy a packet of bananas!

The ISPCA welcomed a most unusual guest to its Donegal Animal Rehabilitation Centre (ARC) recently following an urgent call for help from a member of the public.

The Tarantula, later named Parker, was identified as a Mexican red rump, is about four months old and relatively harmless.  Once this little guy matures to adulthood, it can be determined whether it is actually a male or female.

The stowaway was found hiding in a bunch of wrapped bananas that originated from Central America, and recently purchased at a local supermarket in Donegal.

ISPCA Centre Manager Denise McCausland said:  “Parker was carefully captured and transferred in a secure box before being admitted to the ISPCA ARC for a closer inspection.  A veterinary examination confirmed that Parker was very dehydrated and lethargic after his travels but after some water and mini crickets to eat, he began to perk up very quickly.  Parker was placed in an appropriate humid habitat in temperature and moisture levels suitable for his species and was closely monitored over a number of weeks.  He has already grown in size and is continuously spinning elaborate webs all around his enclosure.  Parker is thriving well; his previous fuzz of hair is thickening well as he grows, also moulting in recent days.

Denise added:  “This is a vulnerable time for Tarantulas as his new exoskeleton has to harden in the coming days and weeks so we are being extra careful.  Parker will be transferred to Alcorn’s Tropical World nearby where his permanent home awaits. There Parker can live the solitary life he requires in a purpose built vivarium fit for a spider Prince or Princess”.

The ISPCA recommends anyone thinking of getting an exotic pet should consider whether they can commit to providing care throughout the animal’s entire life.  Some can live for 30 or even 50 years for some exotic species and many other factors need to be considered such as correct lighting, heating, humidity, diet and other needs in order to keep them healthy. As with all animals, exotic pets have five basic animal welfare needs and owners have a legal duty to ensure they are a responsible pet owner.

3. Ability to act according to natural behaviour

5. To be healthy and protected from pain, injury or disease

The ISPCA put together some interesting facts about Tarantulas!

Did you know that Tarantulas are a group of large and often ″hairy″ spiders of the family Theraphosidae and about 1,000 species have been identified?

If a Tarantula feel threatened, they will defend themselves using their hind legs to scrape needle-like barbed hairs from their abdomen, throwing them in the direction of the threat. If they attack, its venom doesn’t pack much of a punch but it can cause a nasty, irritating rash. A Tarantula bite is no worse than a bee sting however, dogs are more susceptible to tarantula venom although some people may suffer an allergic reaction as a result.

Tarantulas sneak up on small prey at night and then pounce!

Tarantulas hunt on their feet and don’t catch their prey through webs.  They eat a lot of insects but will hunt mice, frogs and even birds by paralyzing their prey with venom. Generally, however, tarantulas are burrowers that live in the ground.

A female tarantulas can live 30 years or longer in the wild!

Female tarantulas are famously long-lived. Even in captivity, they’ve been known to live for over 20 years. Males, on the other hand, don’t make it much beyond reaching sexual maturity, with a lifespan of just 5-10 years on average. In fact, males don’t even molt, once they reach maturity.