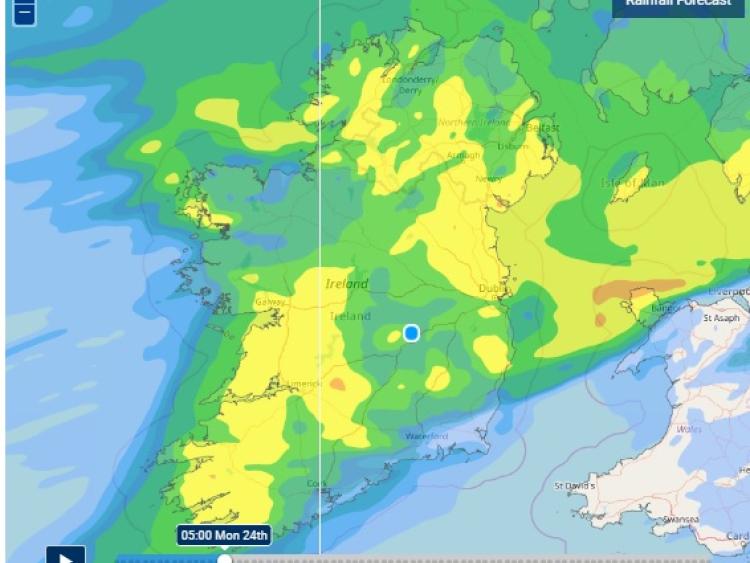 Met Éireann has issued a Status Yellow rain warning for many parts of Ireland as a band of weather that includes sleet and snow is swept across the country raising flood risks further.

The warning says the rain will last from Sunday night and into Monday morning will lead to accumulations of between 20 to 25mm, with higher totals possible in upland areas.

Met Éireann says the rain is likely to be preceded by a period of sleet and snow in parts of Connacht, Ulster and north Leinster, before turning to rain later in the night.

"As the ground is saturated at the moment and river levels are elevated the combined effect of rainfall and snow melt may lead to some localised surface and river flooding," said the forecaster's warning.

Our Atlantic chart shows precipitation and pressure forecast in 6 hour intervals for the next 7 days.https://t.co/9Giuj4CR5m
The national forecast and the national outlook for the coming days are available here.https://t.co/9gKN6SVok4 pic.twitter.com/3hfREPEmS4

TODAY - SUNDAY 23RD FEBRUARY
Mainly dry this afternoon apart from an isolated shower, some bright or sunny spells breaking through the clouds at times. Cloud will thicken from the southwest later and outbreaks of rain will extend across Munster early this evening. Cold, with maximum temperatures of 5 to 7 Celsius generally, but 8 or 9 degrees near the south coast. Winds mostly moderate northwesterly, but strong for a time along north Connacht and Ulster coasts, later decreasing light southwesterly or variable everywhere.

TONIGHT
A spell of rain will extend from the west and southwest, with some heavy falls, leading to localised flooding. The rain will turn to sleet and snow across parts of Connacht, north Leinster and Ulster, with some accumulations for a time leading to hazardous driving conditions. The snow will turn to rain overnight and in the early morning as temperatures rise. Minimum values 0 to 4 Celsius, coldest in the northern half of the country. Moderate to fresh southeasterly winds, (strong near coasts), will veer southwesterly overnight and increase fresh to strong and gusty with gale force winds along coastal areas.

TOMORROW - MONDAY 24TH FEBRUARY
Tomorrow morning, outbreaks of rain and any lingering sleet or snow in Ulster will clear. It will brighten up in the afternoon with sunny spells developing along with a few scattered showers. Maximum afternoon temperatures of 6 to 10 Celsius. A blustery or windy day, with fresh to strong and gusty southwest to west winds, veering west to northwest with gales at times along coasts.

NATIONAL OUTLOOK
Summary: Very cold and unsettled for the rest of the week, with occasional showers or longer spells of rain and some wintry precipitation of sleet and snow at times, especially in Ulster and Connacht. Some dry, bright intervals also. Frost at night.

Monday night: Very cold, with clear spells and scattered showers, the showers most frequent across the western half of the country, with some hail, sleet and snow showers, especially in Ulster and Connacht. Minimum temperatures 0 to 2 Celsius, with a risk of frost, especially in places sheltered from a moderate to fresh westerly wind.

Tuesday: Very cold, with a mix of sunny spells and scattered showers, some of them falling as hail, sleet and snow, especially in the north and west. There is also a risk of thunder, particularly in Atlantic coastal counties. Maximum temperatures just 4 to 7 or 8 Celsius, in mostly moderate to fresh westerly winds, strong along west and southwest coasts. Tuesday night will be windy, with further wintry showers, most of them in the western half of the country. Min. minus 1 to plus 2 Celsius, in moderate to fresh west to northwest winds. Risk of frost and icy patches.

Wednesday: Still very cold, with below normal temperatures. Maximum values only 4 to 8 Celsius, A bright day, with sunny spells, but scattered showers also, some of sleet, with a continuing risk of snow showers, mainly over high ground. Winds mostly moderate to fresh, west to northwest, decreasing light by Wednesday night. Very cold overnight, with sharp or severe frost. Dry in many areas, but some wintry showers will occur in the west and northwest and more persistent rain will develop in southern coastal areas. Min. minus 2 to plus 2 Celsius.

Further outlook: Current indications suggest that it will remain very cold and unsettled for the end of the week and the weekend, with a risk of further wintry precipitation.