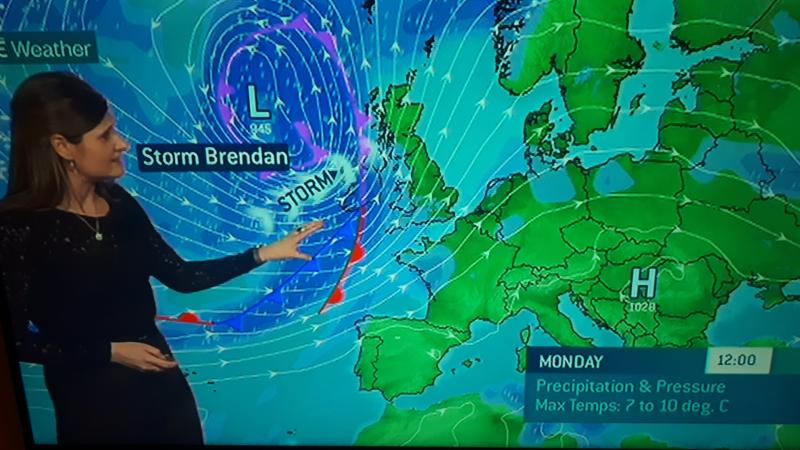 Met Éireann has warned the public about dangerous driving conditions on roads and a threat to life and property Storm Brendan will pose on Monday in its advice about the impacts of Storm Brendan on the eve of it hitting Ireland.

The forecaster warned that winds could exceed 130 km per hour in some parts during the day in its final TV forecast before the storm.

TRACK LIVE: Track Brendan as it moves towards Ireland across the Atlantic

In her forecast after the RTÉ Sunday evening news Met Éireann meteorologist Michelle Dillon delivered set out what to expect from the Status Orange storm which will be a Status Red event off Irish coasts.

"A Status Orange level warning means a threat to life and to property. We can expect a risk of coastal flooding, high spring tides, storm surge and of course some heavy rain," she said.

The forecaster also warned about driving conditions. She said the strongest of the winds will impact the morning rush hour in the west while the impact will be felt on the eastern side of the island in the afternoon. She said some vehicles were at higher risk.

The forecaster said the storm was rapidly deepening on Sunday night as it engages the jet stream.

She said the first of the Status Orange wind warning will come into operation at 5am on Monday and winds would begin to pick up reaching gale force by noon on land.

She said heavy rain will sweep across the country in the morning followed by heavy showers.

She said the second corps of strong winds would impact in the afternoon mainly affecting parts of the west and northwest.

Ms Dillon said the winds would only gradually ease on Monday with and another band of unsettled weather would follow on Tuesday bring sleet and even snow to higher ground.

The forecaster said possibly violent storm force winds would be felt at sea.