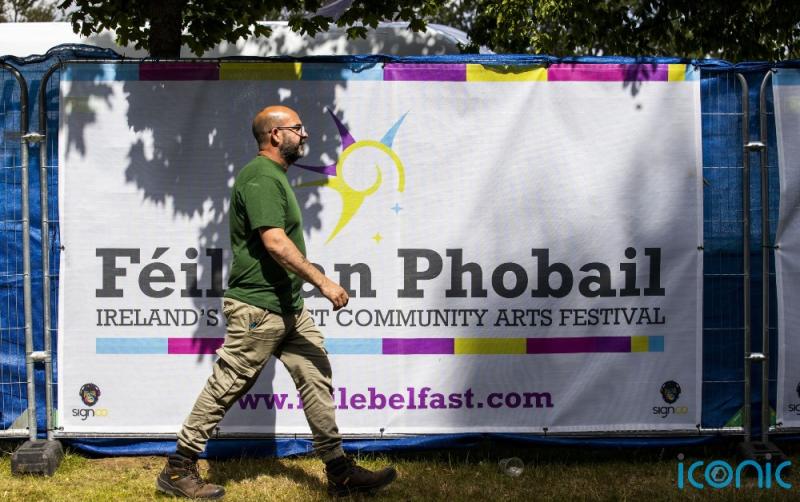 Pro-IRA chants at a concert on Sunday have been condemned, while the sale of Parachute Regiment flags in Derry has sparked anger

There have been calls for political leadership after a series of incidents across the weekend, including pro-IRA chants at a concert in west Belfast.

There has been condemnation of scenes of young people taking part in pro-IRA chants at a Wolfe Tones concert on Sunday as part of Feile an Phobail.

Scenes of chanting at the unveiling of a mural of a burning police vehicle have also been criticised. A video which surfaced online of the unveiling of the mural includes chants of “Get the Brits out”.

There has also been condemnation following the emergence of a photograph which appears to show Larne Football Club player John Herron wearing a T-shirt with the slogan “Up The Ra”.

Meanwhile there has also been condemnation of the sale of Parachute Regiment and UVF flags on sale at a parade in Derry at the weekend.

The Parachute Regiment were responsible for the deaths of 13 civilians in Derry during a civil rights march in the city in 1972, an event which has become known as Bloody Sunday.

She has called for an urgent investigation around funding from public bodies for Feile an Phobail.

“They are young people, many of them born after the Belfast/Good Friday Agreement and yet we are seeing this type of glorification of terrorism which is absolutely unacceptable,” she told the BBC.

Ms Little-Pengelly said recent comments by Sinn Fein vice president Michelle O’Neill that there was no alternative to violence in the past, “was not leadership”.

“I am calling on all political leaders, political representatives from across all parties to say very clearly, and send a very clear message today that all glorification of terrorism is wrong, it has to be called out when it happens,” she added.