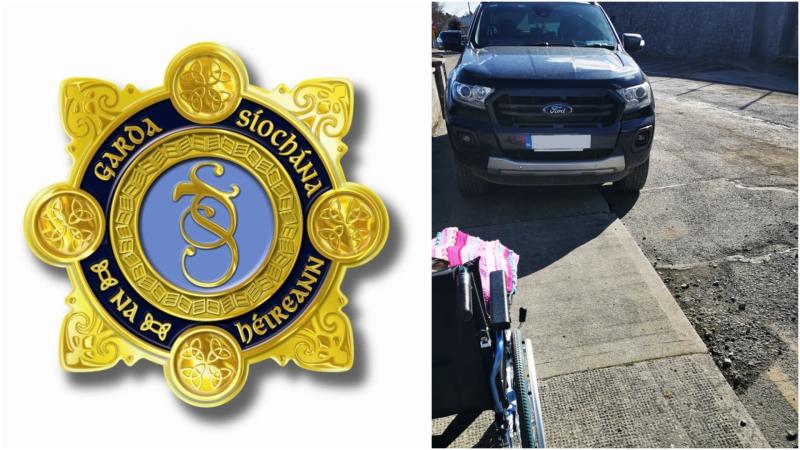 A midlands driver has been banned from driving and another fined after parking in a wheelchair space.

Yesterday, (Friday, March 4), Roscommon and Longford Roads Policing Unit were on patrol when they observed a wheelchair user attempting to make their way home only to be completely obstructed by this vehicle pa the footpath.

An €80 fixed charge penalty was issued to the driver.

Roscommon and Longford Roads Policing Unit were on patrol when they observed this wheelchair user attempting to make their way home only to be completely obstructed by this vehicle pa the footpath.

An €80 Fixed Charge Penalty was issued to the driver. pic.twitter.com/12ePpUpbe5

Meanwhile, a woman who said she stopped at a wheelchair space to let her sister go to the post office was fined a total of €550 and disqualified from driving for illegal parking and driving without insurance.

Shannon Mahon, Church Hill, Tullamore, pleaded not guilty to parking in a disabled parking bay and having no insurance at O'Connor Square, Tullamore on June 11 last year.

Judge Cephas Power heard Garda Pat McGee give evidence that at 11.57am on that day he saw a Ford parked in a wheelchair spot.

Garda McGee said he spoke to the driver who told him she had pulled in five minutes earlier to let her sister run into the post office.

In her evidence, Ms Mahon said she had pulled in to let her sister out and when Garda McGee had seen her pulled in he came over to her.

She said she told him she wasn't parked there but was letting her sister out of the car. Ms Mahon also said that when she tried to show the garda her insurance he would not look at it and he did not tell her to bring it to the garda station.

Cross-examined by Sergeant James O'Sullivan, Ms Mahon said she did not have a wheelchair sticker for her car and repeated that she was not parked there but had just pulled in to let her sister out.

After giving her evidence Ms Mahon left the courtroom briefly and returned with an insurance disk but Garda McGee said a certificate would be required, not a disk.

When Judge Cephas Power examined the disk he said it did not cover the period relevant to the alleged offence.

Ms Mahon said she probably had the policy certificate at home but added that she had subsequently cancelled that policy.

After querying what the definition of “parking” was, Judge Power said there did not seem to be a legal definition but the legislation relevant to the prosecution before him was clearly designed to prevent the “mischief” of pulling into a wheelchair spot.

He was satisfied that Ms Mahon had parked in a disabled parking spot and he also convicted her of driving without insurance.

Longford cottage impresses on RTÉ Home of the Year

Sergeant O'Sullivan told the court the defendant had previously received a two-year ban for dangerous driving and had also been convicted of failing to give a breath specimen.

Ms Mahon had also received a six-month suspended sentence for obstruction of a garda and was ordered to enter into a peace bond.

Counsel for Ms Mahon said the accused had no intention of taking the parking spot and only wished to let her sister out of the car.

Judge Power imposed a €150 fine for illegal parking, a €400 fine for driving without insurance, and a two-year driving ban. He fixed recognisances for an appeal.