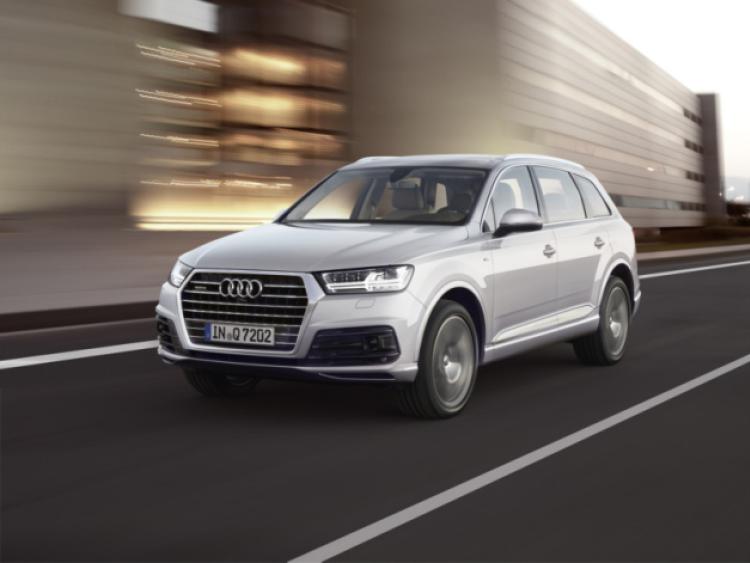 The new Audi Q7 is available to order now

Audi is launching the all new Audi Q7 — with a striking new visual design and top of the line connectivity.

The premium SUV features the new design of the Q family and offers superb dynamics and excellent comfort, in addition to its superior spaciousness.

Mild hybrid technology, the digital operating concept and the optional HD Matrix LED headlights including laser light are just some of the highlights. The new Audi Q7 will be launched in Ireland later in the year.

The Audi Q7 demonstrates the hallmark SUV elements in the current design language.

It bears the large octagon-shaped Singleframe, with six upright slats providing the structure.

As such, the SUV looks even more powerful. The two-part side air inlets have a much more expressive line, just like the sill area that underscores the large SUV’s ground clearance and, in turn, its offroad capabilities.

The headlights, optionally in HD Matrix LED technology with Audi laser light, emphasise with their contour and light signature the width of the full-size model.

On the restyled rear, a striking chrome strip creates the visual connection between the flat rear lights with their technical-looking graphics and carries forward the horizontal body line.

The designers achieved the clear view with taut, flat surfaces, which span the entire width particularly in the license plate region. The Audi Q7 is particularly striking in S line guise.

Audi has substantially enhanced the dynamic attributes of the Q7. In addition to the optimised all‑wheel steering that allows the rear wheels to turn as much as five degrees in the opposite direction, there is the option of electromechanical active roll stabilisation.

Adjustable stabilisers reduce the body movements on uneven roads when driving in a straight line. With a sporty driving style, the focus is on optimum roll compensation – the tendency of the car to lean into the bend is reduced substantially.

As such, the Audi Q7 is maneuverable, precise and agile in urban traffic and on hairpin bends.

In contrast, the Q7 behaves as a highly comfortable, poised touring SUV with excellent ride comfort on motorways – particularly in conjunction with the adaptive air suspension.

It also provides variable ground clearance and prepares the Audi Q7 with its standard quattro drive for terrain off the beaten track.

The relevant offroad mode can be selected via the standard Audi drive select dynamic handling system with its seven profiles. Air suspension comes standard on all Q7 models.