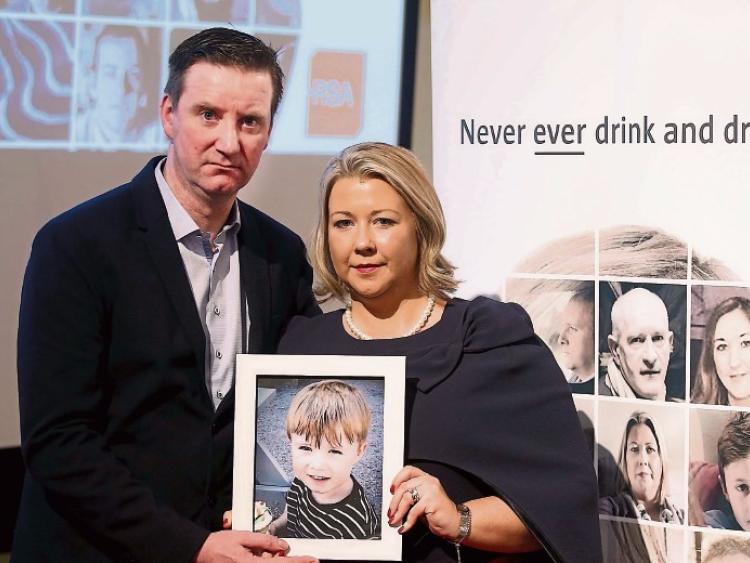 Ronan & Gillian Treacy with a picture of their late son Ciarán.

Laois mother Gillian Treacy, the face of a Road Safety Authority campaign against drink driving, has welcomed the passing of a Bill in the Dáil today that automatically disqualifies first offenders of drink driving.

Ms Treacy from Portarlington, whose son Ciarán was killed by a drunk driver, has just taken on a role as a director on the Road Safety Authority Board.

Today, Thursday, January 18, TDs voted in favour of the Road Traffic Amendment Bill 2017 by 85 votes to eight in the Dáil.

Currently, anyone with a full license caught driving with an alcohol level between 50mg and 80mg is liable to three penalty points on their license and a €200 fine.

However, the Bill will see an automatic disqualification for drivers on their first offence of driving while over the permitted 50mg of alcohol per 100ml of blood.

"It is another big huge step in reinforcing the whole legislation around drink driving. Our aim now is to keep it going until it is eradicated," she told the Leinster Express.

The Bill is now set to move forward to be examined by an Oireachtas Committee.

Ms Treacy said she was "delighted it has passed" on a personal level.

It follows months of her time spent emailing, phoning and meeting Ministers to impress upon them the devastation that drink driving can cause.

"I sent them very personal emails, to show the devastation it caused us. I think it pushed them to that level of compassion that they could see it from my point of view. It was just a matter of getting that message to the ministers and getting that bill passed today," she said.

The Road Traffic (Fixed Penalty-Drink Driving) Bill 2017 proposes that anyone caught driving with a blood alcohol level of between 50mg and 80mg per 100ml be given an automatic driving ban.

Under the current law, driving bans are only handed out for first offences above the 80mg per 100ml level.

Eighty per cent of road traffic fatalities occur in rural Ireland. At least 35 people died in collisions over the period from 2008 to 2012 which involved drivers being found responsible due to alcohol levels at between 21mg and 80mg. Of those, 16 were in the 50-80mg range.

New car sales down 12% in Longford