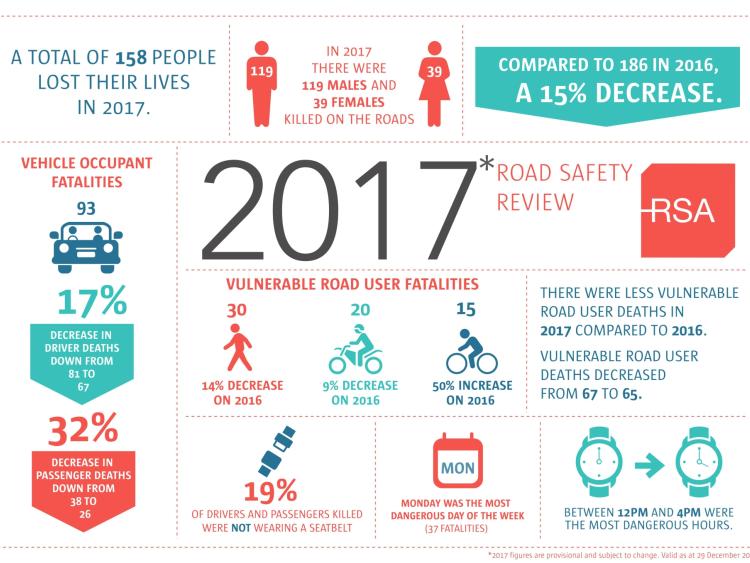 Provisional road collision statistics for 2017, published by the Road Safety Authority (RSA) following an analysis of fatal collision reports supplied by An Garda Síochána, show that there has been a 15% drop in road deaths in 2017 compared to 2016. 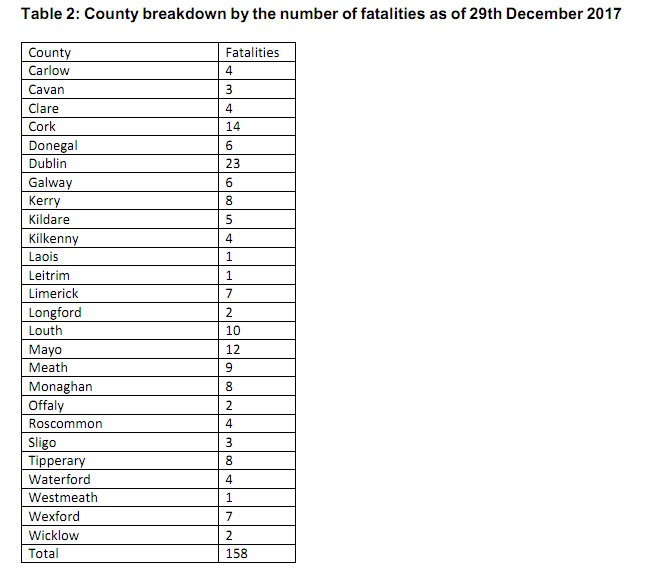 Commenting on the publication of the end of year road safety figures Mr. Shane Ross, Minister for Transport, Tourism said; "It is very encouraging to see that we have reversed the upward trend in road deaths witnessed in 2016. The combined focus on improved legislation, greater enforcement and road safety campaigns all played their part in saving lives. But while it is heartening to see that 2017 was the lowest year on record for road deaths, this is not good enough. We need to continue our efforts if we are to achieve the objective of reducing fatalities to 124 by 2020. Ultimately our aim should be zero deaths on our roads.” The Minister said: "It’s obvious that better road traffic legislation saves lives. A vital tool in helping to reduce deaths and injury further is the new Road Traffic Bill (Amendment) 2017.   I implore all members of the Oireachtas to allow its unimpeded passage so that its life saving measures can be introduced without delay.”

Minister Ross noted that greater enforcement had resulted in higher detection figures and welcomed the commitment from An Garda Siochana that the 2017 increase of 10% in the Traffic Corps will be repeated in 2018. Minister Ross added: "It would also appear indisputable that the bravery of people like Gillian and Ronan Treacy in working with the RSA to show the devastation caused by reckless driving is making a real impact on the public consciousness. I thank them and all the road traffic victims groups who have campaigned so hard and so selflessly to make our roads safer.”

Ms Liz O’Donnell, Chairperson of the RSA said, "While one death is one too many the only way we can measure success or failure in road safety is by recording the number of deaths on our roads. The drop in deaths in 2017 is a very welcome development. Whatever the reason for this decline, the main factor was ultimately as a result of the decision of every road user to change their behaviour for the better. For this I thank you. However, my great concern is that this downward trend will not be sustained in 2018 and beyond. There must be a concerted effort on the part of Government, Government Departments, agencies and the public to continue to implement the measures in the Government’s Road Safety Strategy.”

Assistant Commissioner Michael Finn, Garda National Roads Policing Unit, An Garda Síochána said, "I would also like to express my thanks to all the drivers who slowed down, wore their safety belt, put the mobile away and most importantly did not drink or take drugs and drive. All road users played a part in making this the safest year on record – but we can never be complacent and we can always do more to reduce road fatalities further. One road death is one too many. An Garda Síochána will continue to target those that put others in danger on the roads, and the additional 150 Traffic Corps members being recruited in 2018 will greatly assist us to target and intercept those that cause risk to you and I on the road.”

Ms. Moyagh Murdock, Chief Executive, RSA said "Ireland is still a long way off achieving its road safety targets as set out in the Government Road Safety Strategy 2013 to 2020. The Strategy has set the task of making Ireland’s roads as safe as the best performing countries in the European Union. Specifically to reduce road fatalities on Irish roads to 124 or fewer by 2020. This means there must be a further 22% reduction in road deaths, on 2017 figures, over the next three years. While this will be a challenging target to achieve given our mixed road safety performance since 2013, its one that we must all strive to achieve through our continued efforts to implement the 144 road safety measures contained in the strategy.”