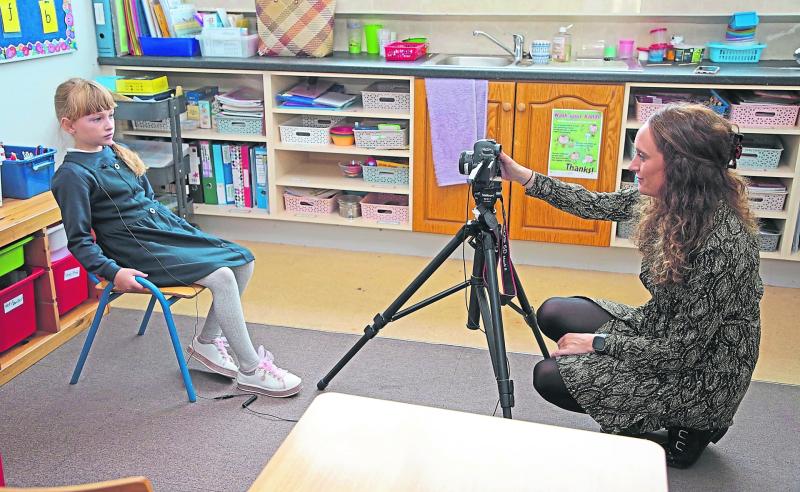 A Department of Education video to inform families fleeing to Ireland from Ukraine will feature pupils integrating to a Longford town school.

St Joseph’s NS, Longford will be front and centre of the production. The Office of the Ombudsman for Children believes almost 7,000 Ukrainian children are enrolled in schools across the country.
The experience for the students who must bridge a language barrier, as well as come to terms with life in a different country, will be laid out in the film.

The communications wing of the Department of Education chose Ukrainian pupils from St Joseph’s NS, Longford to be the subject of the video.

Principal Orla Egan told the Leader about the project: “The Department representatives recorded interviews with our Ukrainian pupils and their parents. This was the national school part of the video, they had already shot the secondary school part before they attended in Longford.”

St Joseph’s NS has accommodated several new Ukrainian students: “We have 15 at present. They are integrating really well. There is a language barrier, but it's sometime we can cope with.

They are treated the same as all other pupils in the school and they take part in all the activities of school life. They have settled really well and are a great addition to the school community.”
Orla says the State has facilitated the increase in the student population: “The Department have given us extra support. We received additional English as an Additional Language (EAL) hours. The Department are also reviewing our allocation of special education teachers.

This means if a child has special educational needs they will be diagnosed to determine their equivalent educational needs within our system.”
The arrival of the camera crew was very thrilling for the pupils: “There was great excitement among the Ukrainian children. They were speaking in their native language through an interpreter, so it gave me an insight into how they viewed the school, what they feel in their classes every day.

It was interesting to hear their experiences, having been displaced from their home country, to be here in a different culture, where there is this language barrier.”
The video will be shown to refugees who arrive in the country. It will also be available on the web: “The young people felt the importance of the video.

“ It will be used as a an educational tool in its own right. It will also be available on the Department's website in a couple of weeks,” Orla concluded.