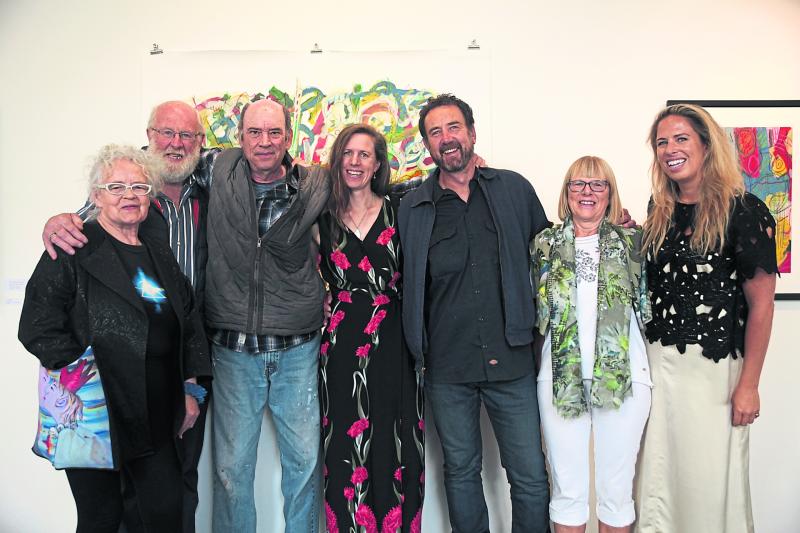 Brian is a renowned American painter, now based in Dublin.

Ciara happened to meet him while at Cill Rialaig last month and was surprised to learn that his family are originally from her hometown Edgeworthstown, Co. Longford.

Not only that, but Brian is also related to Charles Cullen, another very well-known Longford artist.
Ciara said, "I knew immediately that I'd ask Brian to open my show in Kerry when I heard about his family background and also because we have similar work aesthetics. I love when serendipity occurs, it rules the way."

Brian spoke to the large turnout on the day, explaining the importance of creativity stating that ..."if everyone had the type of sensitivity that Ciara has to line and heritage, poetry and colour, we'd be more loving, creating artwork and we wouldn't have as many atrocities that are going on at this difficult time.”

Ciara is currently an artist in residence at the Abbey Road Studios sister to the Luan Gallery Athlone, Co Westmeath. She came to Kerry almost eight years ago after studying Fine Art and has made the Kingdom her second home on the Iveragh Peninsula.

She is one of the many faces of Cill Rialaig, a project that was founded by Dr Noelle Campbell-Sharp nearly 30 years ago now. Over 5500 artists have been welcomed to the converted pre-famine village on Bolus Head to come and create art.

'Rock, Paper, Portal' exhibition is based on how humans cross thresholds and gain access to that otherworldly feeling, and the Cill Rialaig Retreat itself is the ultimate portal into creativity and serenity.
With the mountains, the sea and the famous Skellig Rock at her doorstep, portals have inevitably become one of the main themes of this body of work - not to mention the ringforts, ancient castles and standing stones.

After a successful solo exhibition in January in the new Edgeworthstown Library, it was a natural progression to want to exhibit in Kerry.

Ciara explained, "Cill Rialaig has been a pivotal part of my life and career as an artist to date so I wanted to show there next. I paint and write between the midlands and the southwest. There is raw beauty in both places, with lakes and forests in the hidden heartlands and sea and rocks in Kerry. Both are hidden gems.”

The portals that the artist refers to are diverse and are generally influenced by "place" which is a recurring theme in her work.

'Rock, Paper, Portal" runs at the Cill Rialaig Arts Centre, Ballinskelligs, Co Kerry until August 31 and everyone is welcome to pop in and view it. You can find out more about the artist on @cicituite and www.ciaratuite.com.

Or contact crsiopa@gmail.com / tuiteciara@gmail.com for more information on the exhibition.