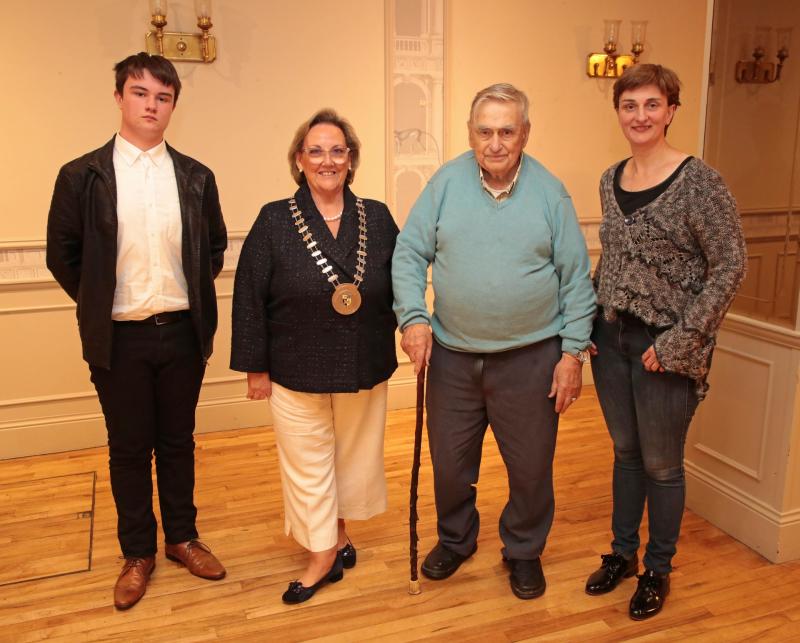 Members of the Farrell Clan from all corners of the globe will arrive in Longford on Monday July 18 for the 9th International Farrell Clan Rally. The inaugural rally was held in 1993 and was a truly international affair attracting visitors from Argentina, Mexico, South Africa, Zimbabwe, Canada, as well as Great Britain and the USA.

Chairman, John Farrell, believes that this rally will attract even bigger crowds to the county this year with a new delegation arriving from Iowa and Virginia in the US, Nova Scotia in Canada and Sheffield in England.

“We will welcome back many of our old friends from New York, Philadelphia, Buenos Aires, Texas and many other places who we are delighted to see returning.

“Add in the numerous Farrell visitors from all parts of Ireland and you will appreciate the huge economic impact The Rally will have on the economy of the town and county.

“Visitors will be brought to many parts of the county from Abbeyshrule to Moyne bringing much needed business to towns and villages throughout the County,” said Mr Farrell.

The Rally commences with the opening of an exhibition of Farrell Memorabilia in the Library on Monday July 18 at 12pm. The exhibition will also feature the work of local artist Gordon Farrell, paintings by Caoimhe O’Ferrall and copper work by John Farrell (Junior’s Celtic Copper Revival).

Registration will take place in Coffee House 45, Dublin St. between 2pm and 4pm. At 6pm a plaque will be unveiled in the Remembrance Garden in memory of deceased members of The Farrell Clan.

A Civic Reception will be kindly hosted by Longford County Council in Áras an Chontae in Water St on Monday evening, July 18 at 7pm. This will be followed by a parade through the town which will be led by Longford Pipe Band.
The parade will travel from Áras an Chontae through Water St, Main St, Dublin St, New St and conclude on the Market Sq at 9pm. Afterwards participants will retire to Clarkes traditional Irish pub.

The Farrell Clan Committee appeal to all Farrells and indeed all Longfordians to come out and welcome their visitors to the county and participate in what promises to be a very colourful parade.

Mr Farrell added, “This year we are asking local Farrells to make a special effort to add to the colour and pageantry of the parade by bringing Club and county flags to join with the international flags.

“On Tuesday, July 19, the assembled Clan will undertake a tour of North Longford. We have planned an action-packed day where we will explore our history and learn about some of our Farrell heroes. The tour includes a visit to Moatfarrell, where the kings of Anghaile were formerly inaugurated, and a visit to The Titanic Monument in Ennybegs.

“We will continue to Knights and Conquests in Granard for an Exhibition by Longford Archers. The evening concludes with An American Wake and dinner in The Haggard in Moyne, where we will mow Pat Murphy’s meadow!

“The Rally tour on Wednesday, July 20, will take us to Mid-Longford. The journey will start with Longford's newest public building, a state-of-the-art Library in Edgeworthstown.

“This building holds particular significance for us as its project coordinator was none other than Rod O'Ferrall, son of Chieftain Connie. We will travel on from there to one of Longford's oldest buildings - The Farrell Castle in Castlerea, Moydow. We will have dinner in the evening evening in The Richmond Inn, Clondra, on the banks of the Royal Canal.

“South Longford has some of the most beautiful scenery in the country and can boast of having three National Tidy Town Award Winners, Ardagh, Abbeyshrule and Newtowncashel.

“On Thursday we will visit two of those villages, Ardagh and Abbeyshrule. We begin with a visit to Brendan Farrells Eco-Garden on the outskirts of the picturesque village of Ardagh. We then continue to Abeyshrule for lunch in The Rustic Inn, where we will celebrate the life and music of Patsy Farrell.

“For those who wish to trace their roots there is a workshop on researching family history with guest speaker Martin Morris on Friday morning at 10am in Longford Library. We will also launch our new website www.farrellclan.ie at this event. The rally concludes at The Farrell Clan Banquet in The Longford Arms Hotel on Friday night at 7pm.