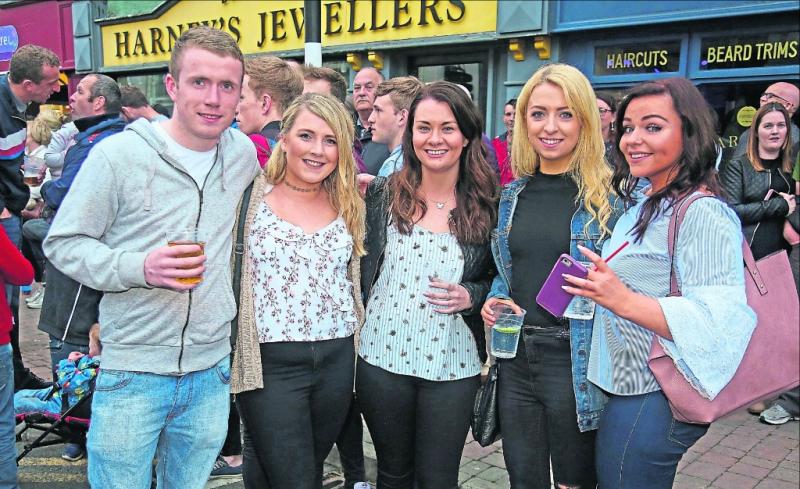 oin Mahon, Aisling Flynn, Lisa Griffin, Katie Dunne and Aislinn McHugh were among the crowds that turned out to enjoy last year's Longford Summer Festival, which brought thousands of people to the str

The hugely popular Longford Summer Festival is set to return for four days on July 5-8 this year with a feast of great live music on the town's main streets.

The event has moved from its previous end of June date in the hope of better weather this year.
Last year saw the festival back on the streets for the first time in 15 years.

One of the organising committee, local publican, Andy Byrne Jnr, said that the response to last year's event was hugely positive.

"We are looking to build on that this year and are working closely with the Council and the Garda to ensure a safe, friendly family event that showcases the best that Longford town has to offer," he added.

The final bill for this year's spectacle will be north of €60k and the publican paid tribute to the Council and other main sponsors this year. He also thanked the public and local businesses who have been hugely supportive of the fundraising event.

The live music will get underway at 7pm on Main St on Thursday evening, July 5 with local favourite David Kiernan, and then one of the rising stars on the Irish country scene, Johnny Brady. The music will continue until 11pm that night.

Popular Irish band, Hermitage Green are the headline act on the Friday night and will be supported by The Fields and other local acts with the festivities underway on Ballymahon Street.

It will be back to Main Street on Saturday night for the group taking the Irish music scene by storm, and they just happen to be from County Longford - the top drawer Brave Giant, who drew 2,500 onto the streets of Longford last year.

The organisers are hoping to top that this year.
It won't be all about great music though, as an artisan market will run on the Market Square from Thursday through Sunday in association with Spin Longford, who have been organising the weekly markets on the Square.

Lisa Daly from Spin Longford said they expect fifty plus exhibitors at the market, while there will also be several other attractions on the Square from Thursday to Sunday.

Sunday will be the big family day with the live music underway from 2pm on the main gig rig and Ballymahon Street will close off to host a great day of family entertainment.

The children can look forward to their favourite Marvel heroes, clowns, bouncy castles, balloon modelling face painting and so much more.

He featured at last year's festival and is one of the main acts on the Sunday this year and there will be a great welcome for Jake Carter, the recent winner of the Strictly Dancing TV show.

Then, bringing the curtains down on the four days of great entertainment will be what many call the greatest ever Irish pop band: the Frank & Walters.