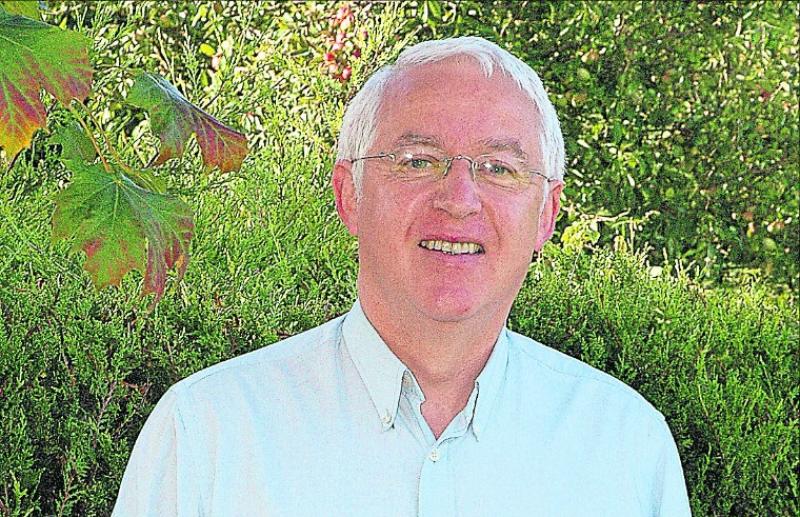 “I feel particularly humbled to follow my late Uncle Paddy”, he says, and you know that the memory of that occasion means a lot to him.

He himself will be presented with his award at the association’s 64th annual gala dinner on Saturday April 14th in the Red Cow Moran Hotel, Dublin.

Denis is the fifth of seven children born to Liam Glennon and Anne Farrell and was raised in what he refers to as a caring and close family.

“Our home was a place where we were given a great appreciation of all things Irish, music, dance, sport, history, language, literature, Art and a faith that has sustained us through good times and difficult times, happy times and sad ones,” he reflects .

Sadly three of his siblings Liam Óg, Kathleen and Eamon “have joined my parents in their eternal reward, but I am so grateful to still have my sisters Anne and Mary and brother James to share this wonderful life”.

He followed his older brothers into St. Mel’s College 1961-66 where his father had also been a pupil in the 1920s.

Denis remembers the 1960s as a golden era for football in both Longford and St. Mel’s. He then went to UCD where he did a BA in Mathematics, Economics and Geography , teaching all three after graduation in 1970.

He spent most of his teaching life in his Alma Mater, St. Mel’s College, from 1970-2008 and made history by becoming its first lay principal in 2002, a position he held until his retirement six years later.

He took two career breaks during his time in Mel’s. The first was on secondment to teach in a teacher’s training college in Nigeria 1974-76 and while there he travelled extensively, including a visit to Niger in the Sahara.

He also got involved in a voluntary capacity through the Catholic Missions, assisting in the provision of badly needed water to villages, hospitals, clinics and mission stations.

This was just after the Biafran War when a major effort was being made to restore and develop the infrastructure of Nigeria. During his time there the country experienced two military coups.

It was then that Denis really understood the extraordinary work done by Irish Missionaries in building and supporting schools, colleges, clinics hospitals, training centres, missions and outstations and accessing funding to support these.

He strongly defends against a certain level of criticism and some derision that has been directed at the “perceived negative impact of the imposition of western culture at the expense of native culture and mores.

In my view this criticism is seriously misplaced because in my time there the missionary societies were providing a supporting role to indigenous management and control.

Today their extraordinary legacy in health, education, training and faith is largely ignored in Ireland, but is manifested in the growing number of Nigerian priests ministering here.

For myself this was a rich and deep experience”, he says with considerable feeling.

Denis remembers that on his return someone felt the need to inform him that he wouldn’t give a penny to any of those charities because most of the money does not get there, as he put it.

“My response to that was, and still is, that all I know for certain is that if you don’t give anything then nothing at all gets there!”

His second career break from 1989-9 involved working in the world of computer software with his cousin Billy Glennon of Vision Consulting, Dublin as training manager.

Denis found this a great challenge and a most fruitful experience as this was a young vibrant company and he was ten years older than the next oldest person in the company.

“It was also a life transforming experience as I learned so much from my time working with these young well educated and highly driven young professionals”.

He was able to bring all these valuable experiences back into the classroom when he returned to St. Mel’s in 1991 and later during his principalship there in 2002-2008.

The current principal, Declan Rowley, invited Denis to research and produce a book of photographs and memories to commemorate the 150th anniversary of the founding of the college in 1865.

He is especially grateful to the many, many past pupils and teachers who went out of their way to assist when called on to provide information.

Happily for Denis “the book was very much a Longford production printed by Turners, designed by Elizabeth McLoughlin and overseen by Frank Quinn, both from Longford”.

This was his second book to write, the first was in 2013 at the invitation of his cousins.

The Glennon family always had a deep interest in sport, in particular Gaelic football, and Denis joined his older brothers in playing for Longford Slashers where they each won Longford County Senior Championship medals.

This GAA interest was followed by Denis’s son Dominic who played at all grades for Longford County as well as his club Slashers, winning two Longford senior championship medals. He also won an All Britain Championship medal while in Manchester.

And the continuing Glennon connection with Longford GAA gives Denis much satisfaction: “It is wonderful to see my cousins Pat, Mike and Billy in Glennon Brothers as the main sponsors of the Longford county team”; and he doesn’t forget to mention his brother- in-law, John Greene,” who has a lifelong involvement with the GAA at local, provincial and national level”.

Denis describes himself as having an eclectic range of interests, and the extent of his voluntary activities - always carried out with good grace in a most under stated manner – would severly test the best of us.

One of his earliest activities as a volunteer was helping in the Longford Branch of Multiple Sclerosis Society (MS), set up by the late Canon Macaulay and Denis’s late father in the 1970s “with the support of so many others”, he emphasises.

The surviving members of his family still help out at the annual church gate collection and in 2016 Denis completed his 40th collection.

“Like most families who collect for worthy causes our involvement with MS came about as a result of a family member - my father’s brother Martin – who suffered from the illness”, he says.

In that position he describes it as “a great pleasure to work with the theatre Manager Mona Considine and her truly dedicated staff”.

He has been involved for many years with the Disabled People of Longford (DPOL) and has been chairperson of the board of the DPOL Voluntary Housing Association for a number of years, which was established to provide a small number of houses for people with physical or sensory disabilities.

Knowing that he’s speaking for the rest of the board he is keen to “single out the work of board member Pat McGann for the Trojan work he does on our behalf”.

Denis keeps in touch with the world of education through chairing the board of Scoil Mhuire, Clondra. And he’s currently a committee member of the Diocesan Liturgy Group, Council Audit Committee, Disability Strategy group Steering Committee.

He was also an active member of the Court House Action group which fought successfully to save the iconic building that is Longford Courthouse.

As though there wasn’t enough going on, Denis also became involved in local politics and was an active and effective councillor for both the Town and County Councils from 1994 to 2014, being a member of both simultaneously from 1999-2004.

Being from a wholesome and supportive family background himself and, as someone for whom family is very important, Denis is now blessed with his own.

He is married to Olive Cullen from Frenchpark, County Roscommon and they have three grown up children, Dominic, Paul and Anna, a daughter –in-law Annette and two grandchildren Shay and Fiadh, who are obviously much loved.

Looking forward to the association’s gala night in Dublin on Saturday April 14th, Denis recalls that “both my late brother Eamon and his wife Breda R.I.P. were regular attenders at your annual function held in Dublin and Olive and I accompanied them on many occasions, until their health no longer made attendance possible.

We always remarked on the warmth of the reception extended to all by the members of successive committees to each and every person in attendance”.

As a point of interest, Breda’s uncle Tom Gray was a founding member of the Longford Association and, many will know already, that Denis’s late uncle Donal Glennon was a life president of the association.

Gentleman that he is, Denis wants to pay tribute to the association: “You have kept the Longford flag flying through thick and thin and you have sustained the spirit called pride of place, and you have supported so many occasions and events to do with Longford and our people”.

A nice note on which to end.