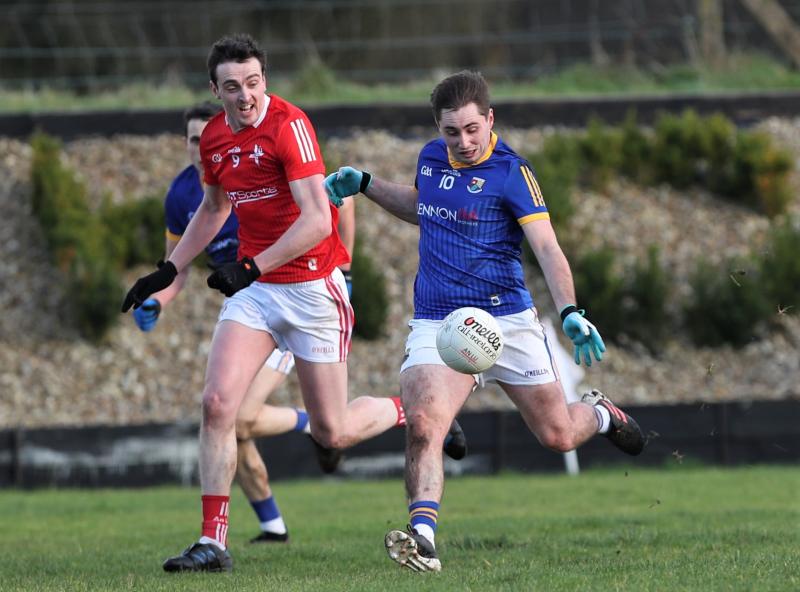 Carrickedmond's Eoghan McCormack was of fourteen players that new Longford manager Billy O'Loughlin handed a debut to last Saturday in the opening round of the O'Byrne Cup Picture: Syl Healy

Longford got their O’Byrne Cup campaign off to a winning start by defeating Louth in a thrilling game in Clonbonny on Saturday last.

O’Byrne Cup holders Longford (there was no competition in 2021) were eight points behind, 0-6 to 0-14, early in the second half, following a very lacklustre first half performance.

However, a number of substitutes made a big impact in the second half and the home side upped their game considerably, reeling off 2-7 without reply from the visitors.

This is a good start for new manager Billy O’Loughlin. Along with selector Eugene McCormack (Carrickedmond), the new management fielded a lot of new players.

Some players were unavailable due to Covid issues, while other regulars are currently being rested.

It is still unclear whether McCormack will be the only selector, as apparently there have been difficulties in getting a second selector.

It is doubtful that there have ever been so many fresh faces playing for a Longford team.

However, for all of the youth explosion, a very familiar name was the outstanding performer on the day.

The Mighty Quinn
Michael Quinn was simply immense. Even when Longford were struggling in the first half, Quinn never let his high standards drop.

He mopped up a huge amount of ball in defence, alleviating pressure on his teammates.

At one stage he won possession, despite the attention of three Louth players.

Quinn will turn 32 this year and is now the senior figure on this Longford team, but the young players can learn much from him.

Another experienced man who anchored things was Darren Gallagher in midfield. The big Granard man had a mixed day on the frees but was as busy as normal in the middle.

Louth were physically stronger and more experienced, and this undoubtedly helped them to settle much quicker into the game.

With Mickey Harte at the helm, there were definitely some comparisons with a Tyrone team in their style of play.

Forwards dropped deep and Louth were patient in their approach play. But they were direct too and their inside forwards, particularly Jay Hughes, caused havoc in the first half.

Conall McCaul opened the scoring for the visitors early in the first half, with Dylan Farrell replying for Longford.
The Killashee player ploughed a lone furrow largely for Longford in the first half in attack. However, he constantly showed for the ball and also kicked three frees.

Dylan Farrell’s accurate 16th minute free split the uprights for Longford’s third point, however, Conor Early and Jack Murphy responded for Louth, giving the visitors, who remarkably had seven different scorers, a 0-7 to 0-3 cushion at the first half water break.

After the water break, Louth increased the pressure, and the Longford defence were embattled. Direct, accurate balls into the visitors’ forwards paid dividends and it yielded four unanswered points through excellent debut boy Jay Hughes (two frees and one from play) and Ryan Burns (free), increasing their advantage to eight points, 0-11 to 0-3, with 27 minutes gone.

Dylan Farrell kept Longford in touch with two pointed frees each side of a Hughes point and it was Louth went into the break 0-12 to 0-5 in front.

The Longford management brought on the first three substitutes at half-time, with Darragh Doherty making a particular impression in the second half.

Subs work the oracle
However, more substitutes were being brought on for Longford and another one of these had a big bearing on the game.

Ross McNerney had not featured in the county jersey for a number of seasons. However, the Dromard forward still has plenty to offer, contributing a goal and a point from a free.

Points from Joseph Hagan and Darragh Doherty were followed by a goal from Oran Kenny in the 52nd minute, in his home ground.

Longford added a second goal in the 66th minute, with Ross McNerney powering to the net, having been set up by Darren Gallagher.

Points followed from Hagan and the lively Dessie Reynolds. Longford scored 2-7 without reply in the second half.

Many of the new boys made an impact. Ryan Moffett was solid at full-back. Tadhg McNevin had good spells in midfield.

Another player with strong Granard connections was brought on as a substitute. Ronan Fitzgibbon, who plays with Kildare club Sarsfields, worked hard upon his introduction.

Considering that there are still a lot of experienced players to come back into the mix, it will be interesting to see how many of the young guns are still around come the championship.

Longford’s second outing of the competition is this evening (Wednesday, January 12) away to John Maughan’s Offaly at 7.30pm in The Faithful Fields, Kilcormac.

So if Longford could manage a win tonight, then their clash with Dublin on Saturday would effectively be a semi-final as the top team in Group A qualifies for the final which is scheduled for Saturday, January 22.